The feature race at York this weekend is the £115,000 Group 2 Sky Bet York Stakes over ten furlongs. The race replaced the Scottish Derby in 2006 and is open to three-year-olds and upwards. It is regarded as a trial for York’s International Stakes with Twice Over winning both events in 2011. Mukhadram was another notable winner in 2013 who went on to win the Group 1 Eclipse Stakes at Sandown the following year. 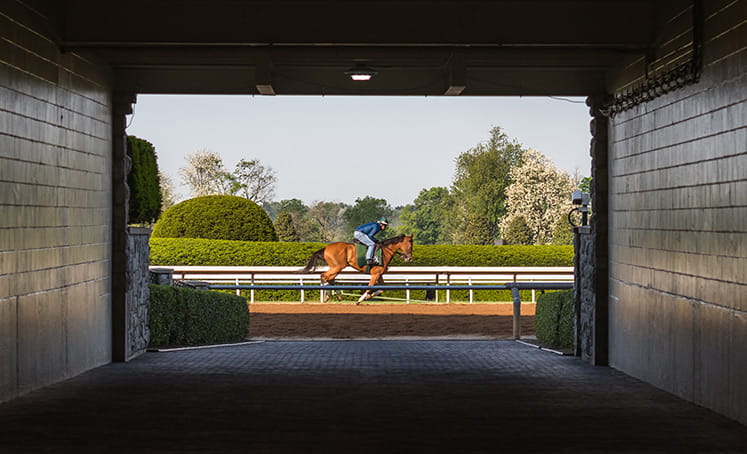 Mohaafeth Ready For Next Step Up In Class

The firm favourite here is Mohaafeth, like Mukhadram, trained by William Haggas and racing in the colours of Shadwell Estates. He is beautifully bred, by Frankel out of a Sea The Stars mare, and is unbeaten in four starts as a three-year-old.

He briefly flirted with Derby favouritism after winning the Listed Newmarket Stakes in May by five lengths. He only faced three rivals that day and Haggas decided to withdraw him from the Epsom Classic when the going turned soft. His patience was rewarded when the horse returned to action in the Group 3 Hampton Court Stakes at Royal Ascot.

Always travelling powerfully in the hands of Jim Crowley, he quickly asserted at the furlong marker and beat Roman Empire by a length and three-quarters. He drifted to his right in the closing stages, still showing signs of inexperience. This is another step up the ladder but it does not look like a strong renewal and a win here would set him up nicely for a tilt at a Group 1 prize.

The danger on form is undoubtedly Armory, a four-year-old son of Galileo trained by Aidan O’Brien. He has won five of his fourteen races, most recently winning the Group 2 Huxley Stakes at Chester in May. He then finished a creditable third to stable companion Love in the Prince of Wales’s Stakes at Royal Ascot.

Seamie Heffernan held him up that day and he never really looked like landing a blow. He stuck on gamely to be beaten only a length and a half and everything points to him providing a stiff test for the favourite. He does carry a 3lbs penalty for his Chester victory and that could just give Mohaafeth the edge.

Juan Elcano has taken a long time to fulfil the potential of his excellent fifth in last season’s 2000 Guineas. He was beaten twice here last season, finishing third in the Dante Stakes and failing to stay a mile and a half in the Great Voltigeur. He has since been gelded and had wind surgery and bounced back to win the Listed Wolferton Stakes at Royal Ascot. That was on good to firm ground so the going will hold no fears for him.

Bangkok is a regular performer in these races but needs things to go his way. He failed to see out the mile and a half at Newmarket last time but is held by Armory on Chester form, a track that ought to have suited his style of racing. Montatham was a very progressive handicapper last season and a stable companion of the favourite. He was not disgraced in a competitive handicap at Sandown last time but has yet to race at this trip and could be there to set the pace.

The Sky Bet York Stakes is due off at 3.15 on Saturday 24th July and will be televised live on ITV.