Are the Super League Proposals Really Dead and Buried?

The football world was shocked to its core when it was announced that Europe’s biggest clubs were quitting the Champions League to join a breakaway Super League. Public pressure forced a humiliating retreat, but is that really the end of the story?. 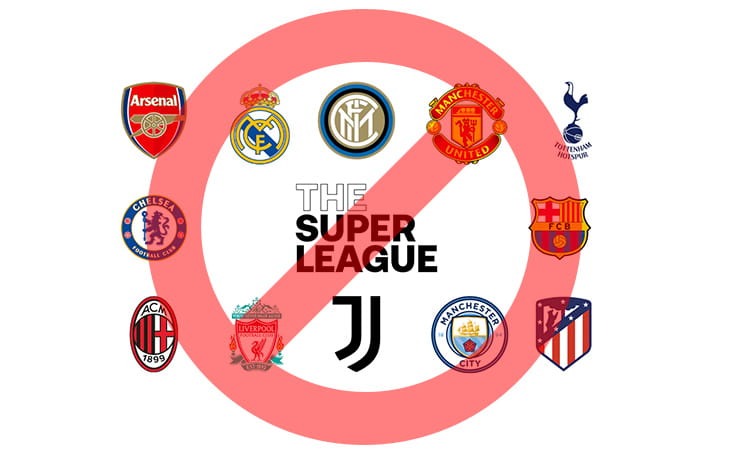 Sunday 18th April is a date that most football fans will remember forever.

Like many, we were enjoying binge-watching the football. With two games in the Premier League, an FA Cup clash and even an interesting Scottish Cup clash between Rangers and Celtic, there was certainly plenty to watch. Then the news starts trickling in about a Super League.

We have, of course, heard about proposals for change in the past. Just six months ago, Project Big Picture was announced. Led by Liverpool and Manchester United, the plans would see clubs in the EFL be given a £250m war chest shared between the clubs and a promise that they would also be given 25% of any future TV deals that the Premier League negotiate.

With clubs, especially those in the lower leagues, struggling with the impact of covid-19, it sounded a great offer, but surely there was a catch?

Clubs would have to agree to a trimming down of the Premier League. The current twenty teams would be reduced to eighteen, which, of course, would make getting into the top-flight more difficult. There would also be a scrapping of the EFL Cup (the Carabao Cup), and the Community Shield would also be scrapped. With the ‘big clubs’ filling these newfound gaps in the schedule with more lucrative European games and pre-season tournaments in which the top teams in Europe would play each other.

Most damaging for the status quo was that the proposals would give the ‘Big Six’ special voting rights, along with West Ham, Everton and Southampton. A departure from the one club, one vote system that currently exists in the Premier League.

Not surprisingly, a vote on the proposals failed. With a three-quarter majority needed to see proposals pass, clubs that face the real risk of relegation each season didn’t want to vote on their own relegation and didn’t want more power in the hands of the already powerful clubs.

At the time, opposition to the plans was fierce. A source at West Ham said: “The ‘Big Six’ are using Covid for a power grab. If this goes through, over time, they will just use more and more for themselves,” The Government’s Department for Culture, Media and Sport described it as a “backroom deal” that would “create a closed shop at the very top of the game.”

So, dead in the water?

Knowing what Liverpool and Manchester United had proposed with the ‘Big Picture’ idea, we really shouldn’t have been so surprised with the Super League plan. However, what made this news shocking was the ‘done deal’ nature of it, and the fact clubs had signed alleged binding contracts, and it was seemingly a matter of when not if.

This new league would only allow guest clubs, who would only have a short stay in the competition, and there would be no threat of relegation for the founding members.

If the government thought the Big Picture was a closed shop, these proposals saw the shop closed, shutters erected and a bouncer on the door checking ID.

Outrage at the plans erupted, and a lot of credit goes to Gary Neville and Jamie Carragher. Despite being rivals and never shy to show their love for Manchester United and Liverpool, respectively, they became united in their opposition to the plans and urged supporters to oppose these plans.

Neville predicted that if one club pulled out, the rest would fall like dominoes, and that’s exactly what happened. Manchester City and Chelsea went first, and by the time fans woke up on Tuesday morning, all English clubs had abandoned the idea.

Although the clubs have all issued grovelling apologies, and we could still see disciplinary action against the clubs involved, do we really believe this is the end of the story?

It seems only a matter of time until we see another power grab by the ‘Big Six’. No doubt the governing bodies will introduce new rules and harsher punishments for clubs in the future if they do contemplate breaking away from the competitions, but with many of the owners of these clubs not even attending games, will they care?

The threat seems over at the moment; the clubs have suffered a bloody nose, but the suspicion is that they will just be more covert and plan the next coup d’état better.

For now, the fans have won, but until we get clubs back into the ownership of supporters, it seems inevitable that it won’t be long until the next ‘great idea’ to change football.

We know it’s not broken and will have to unite to fight those trying to fix it.