Horse racing resumed in the UK on Monday after a 76-day absence due to the Coronavirus Pandemic. Racing was the first top-flight sport to get back under way but goes ahead behind closed doors with social distancing rules enforced. The flat racing turf season is now playing “catch up” and it is straight into the Classic races, starting with the 2000 Guineas at Newmarket on Saturday.

This race has been won by many of the greatest names in the history of the sport. Nijinsky won the race in 1970 before going on to clinch the Triple Crown with victories in the Derby and St Leger. Other notable winners include Dancing Brave (1986), Nashwan (1989), Sea The Stars (2009) and Frankel (2011). Aidan O’Brien is the leading trainer in the history of the race with ten winners, including four of the last five renewals. 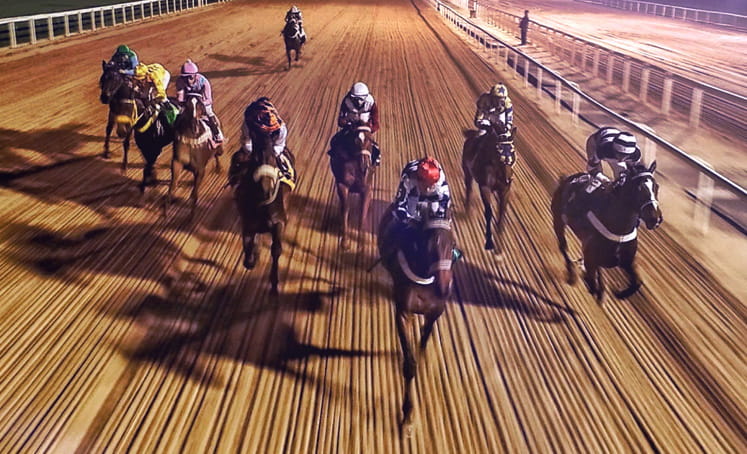 Godolphin last won the race with Dawn Approach (2013) but have the hot favourite this year in Pinatubo. With no trials this spring, form students are relying on the two-year-old ratings. They point clearly in the direction of Charlie Appleby’s Champion juvenile who was unbeaten in five starts.

Pinatubo started his career in a modest novice stakes at Wolverhampton before winning the Woodcote Stakes at Epsom. An impressive victory in the Listed Chesham Stakes at Royal Ascot established him as a high class colt. His five lengths victory in the Group 2 Vintage Stakes at Goodwood catapulted him to the head of the Guineas’ betting and he has been there ever since.

His first Group 1 came with a nine lengths win in the National Stakes at the Curragh before signing off his season in the Dewhurst Stakes. He was not as impressive at Newmarket, William Buick driving him out to beat Arizona by two lengths. That horse, along with stable companion Wichita, lead a team of four from Aidan O’Brien’s yard.

Arizona travelled to Santa Anita for the Breeders’ Cup in November but could only stay on into fifth place behind Structor. He was far from disgraced that day, being beaten less than two lengths on his seventh start of the year. It is no surprise that Ryan Moore has chosen to stick with him. That means Frankie Dettori steps in for the ride on Wichita, arguably less exposed with just four races under his belt. He has plenty of scope for improvement and Dettori’s presence will make him a popular each-way selection.

Pinatubo’s nearest rival on official ratings is Andrew Balding’s Kameko, the winner of the Futurity Stakes. The race took place on the all-weather at Newcastle after being re-scheduled from a waterlogged Doncaster. The son of Kitten’s Joy was a decisive winner that day, making amends for a surprise defeat here in September. He had been beaten a neck by Royal Dornoch in the Royal Lodge Stakes, arguably one of O’Brien’s lesser lights. Kameko’s preparation has gone smoothly and he is as short as 7-1 in the ante-post betting.

Kinross finished over 6 lengths behind Kameko at Newcastle after being sent off the hot favourite. Ralph Beckett’s Kingman colt had romped to an 8 lengths win in a Newmarket maiden on his debut but still has plenty to prove. The blue of Godolphin will also be carried by Military March and Al Suhail, first and second in the Autumn Stakes over course and distance. The winner showed more resolution than the runner-up and should give Hector Crouch a good ride on Saturday.

Last year it was an advantage to be drawn high but it looks as if New World Tapestry (drawn 8) is in to make the pace for the O’Brien team. Favourite Pinatubo (7) and fancied runners Wichita (9), Arizona (13) and Kameko (15) are all well placed to get a good early position.

The 2000 Guineas is due off at 3.35 at Newmarket on Saturday 6th June and will be televised live on ITV.