This is one of the first valuable handicap hurdles of the season over two miles and always attracts a good field. Three horses share top weight with Air Horse One, High Bride and High Secret all on 11st 12lbs.

Alex Ferguson’s 7lbs claim reduces the burden on High Bridge who completed a hat-trick at Newbury in February. Connections took the former Godolphin-owned gelding to Cheltenham for the Supreme Novices’ Hurdle the following month. He was in contention at the third last but faded up the hill.

High Secret ran on the flat at Royal Ascot in June when ninth in the Ascot Stakes. The son of High Chaparral won a couple of minor races at Taunton last season but looks to have plenty of weight at Ascot. Air Horse One won here in February and was a close fourth to Arctic Fire in the County Hurdle at Cheltenham. The grey was disappointing at Punchestown in April and has not raced since.

Don Bersy is an interesting entry from the Tom Symonds stable. He won three consecutive races last winter before finishing third at Newbury off a mark of 132. Stamina may have been his un-doing that day over two miles and three furlongs. He is only 1lb higher on Saturday and could still be well treated.

Alan King saddles Elgin who is only 1lb lower in the handicap. The five-year-old was a progressive novice last season, winning at Newcastle and Kempton. He then finished runner-up in two Grade 2 novice events before finishing seventh at the Cheltenham Festival. Elgin ran a promising race at Chepstow last month when fourth to Misterton under a big weight.

Nicky Henderson entered three horses for this race with Jenkins, Lough Derg Spirit and Verdana Blue. The former has been chalked up as the ante-post favourite, a five-year-old son of Azamour. He was surprisingly beaten at Kempton by Elgin having previously looked a Supreme Novices’ Hurdle prospect. He won at Ffos Las in April despite showing a tendency to hang to his right.

Lough Derg Spirit won at Musselburgh in February but was pulled up at Aintree next time. Verdana Blue won at Hereford and Taunton before finishing fourth in the Mares’ Hurdle at Cheltenham. She started joint-favourite at the same course in April but could not quicken over the extended two and a half miles. The daughter of Getaway has shown her best form on good ground and should get conditions in her favour.

Dolos bids to step up on Chepstow run

Paul Nicholls could run Dolos who was a good second to Silver Streak at Chepstow last month. The four-year-old gelding was beaten four and a half lengths but should strip fitter on Saturday. He ran a good race at Ascot in April when second to So Celebre and will be ridden by Stan Sheppard.

Dr Richard Newland is good at judging the handicap and is represented here by Caid du Lin. The French import got off the mark for the stable when beating Summer Storm at Fontwell last month. That was a good effort under a big weight and he is 6lbs higher on Saturday.

Barry Geraghty rides Midnight Maestro in the JP McManus colours for Alan King. He has not raced since being pulled up following a bad mistake at Haydock in April. He is better judged on his previous victory in soft ground at Stratford.

Nick Williams saddles Peruvien Bleu, a five-year-old gelding by Fuisse out of a Kahyasi mare. He is fit from a recent win over Banditry at Ludlow. Three of his four career wins have been at the venue and he is 8lbs higher this weekend. Gary Moore’s Clayton has not run for a year and it will be a fine training performance to have him fit enough to do himself justice. Clayton did win a Plumpton maiden hurdle decisively and was second here as a novice. 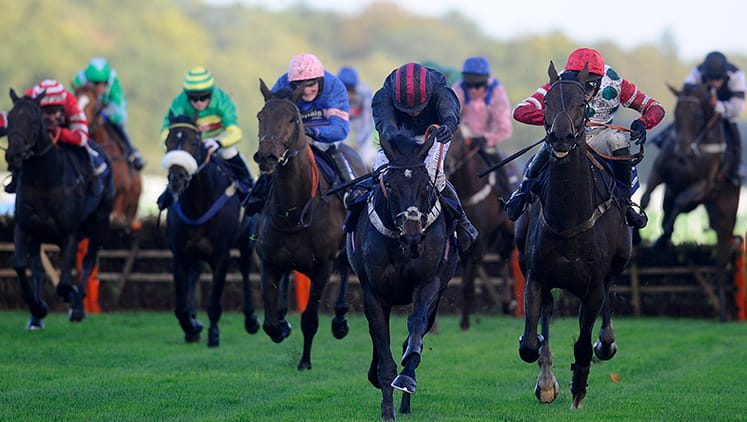 The William Hill Handicap Hurdle is due off at 3.00 at Ascot on Saturday 4th November and will be televised live on ITV4.