The beautiful location of Gros Islet in St. Lucia may be for many, the dream location. But for under pressure England, the tropical paradise could soon become the place of nightmares. Already beaten in the series, England must avoid defeat to prevent the Windies claiming a historic whitewash

Albert Einstein once declared that the definition of insanity is doing the same thing and expecting different results. It’s easy to imagine that Einstein was watching England batsman when he was inspired to write those words. Expecting anything other than an England batting collapse at the moment, at the very least indicates a degree of delusion.

Heading into the final Test match this weekend, England are staring down the barrel of a 3-0 destruction at the hands of the West Indies. A real possibility given their performances so far in this Test. While the first Test defeat could have been dismissed as a bad day at the office, the Groundhog Day performance in the second Test has rightly made the Barmy Army faithful nervous.

No Caribbean cruise for England

No doubt the ECB will have pencilled this clash with the West Indies with the intention of giving England a nice easy warm-up. A test against a team who have been in the shadows since the ’80s, this should have been exhibition stuff, a chance to nail down the starting order. After all, there are bigger challenges that lay ahead in the shape of The Ashes and a World Cup on home soil.

Yet as early as day two in the first Test against the Windies the cracks appeared. In a frantic day, a remarkable eighteen wickets fell, unfortunately, ten of them belonged to England. West Indies set England a target of 289 from the 1st innings, Hetmyer being the highest scorer with 81 off 109 balls.

England’s response was a batting collapse with the team heading back to the dressing room after 30.2 overs for the paltry score of 77.

West Indies went into bat and at least initially, English optimism was still there. When the English attack reduced the West Indies to 61-5, it briefly appeared that maybe the 77 score wasn’t that bad after all. It would turn out to be a false dawn as the host recovered and declared after 103.1 overs on 415 with 4 wickets to spare. Opener Burns gave hope of an unlikely run chase of 628, hitting 84 runs which included 15 4’s whilst at the crease.

Once Burn was bowled by Chase, it would signify the start of a bowling masterclass by Chase who almost singlehandedly defeated England, as his remarkable stats of 8 wickets in 21.4 overs at a cost of 60 runs shows. 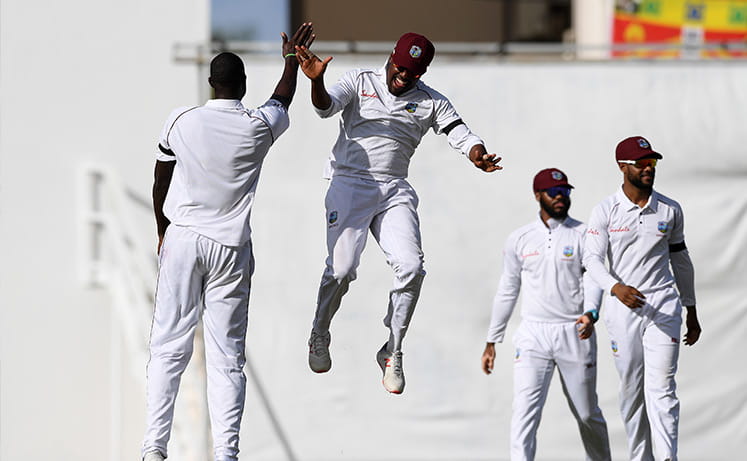 If the first Test England performance was bad, it was nothing compared to the abject display in the second. The West Indies showing it was not a lucky first Test showing, once again humiliating England with a 10 wicket victory. The English batters were seemingly intent to prove that their bad performance with the bat in the Test was also no fluke. Falling from 35-0 to 132 is the stuff of legends but not in a good way of course.

England never looked like catching a fairly modest 306 total by the West Indies, so it proved, falling 187 and 132 with nearly two days of playing time to spare.

There is, of course, the chance that this defeat by the Windies will be the jolt the team need. England suffered a wobble last year. Vultures started to circle over England coach Trevor Bayliss’s head after a devastating 4-0 Ashes battering by the Australians. This was followed by a loss to New Zealand and a draw with Pakistan. The rest of 2018 showed a reversal of fortunes with England finding form with a brilliant 4-1 demolition of India, the best-ranked team in Test cricket. England ended the year on a high by beating Sri Lanka 3-0.

One thing is for sure, England need to improve and improve quickly with just three months until the start of the World Cup.