Following his dramatic comeback and knockout win against Vladimir Klitschko, Anthony Joshua has been anointed the present and future king of heavyweight boxing.

After another doughty challenge by Carlos Takam was despatched last month, Joshua has now set his sights on unifying the division within the next 18 months. This would involve adding Joseph Parker’s WBO belt and Deontay Wilder’s WBC title to the IBF and WBA ‘Super’ crowns already in his possession, as well as overcoming any mandatory challengers that are thrown into his path.

This is without mentioning Tyson Fury, who is planning his return to the sport and remain the holder of The Ring’s prestigious heavyweight crown.

For now, however, the unbeaten Wilder would seem to pose the biggest threat to Joshua’s unification plans. But could he actually scupper them?

Who is Deontay Wilder?

The WBC champion since January 2015, Wilder has an impressive record that has seen him win all of his 39 bouts (and an incredible 38 within the distance). Bermane Stiverne remains the only man to have taken Wilder the distance, but even this minor blemish was corrected when the champion secured a first-round KO in their recent rematch.

Wilder has also completed six successful defences of his title, while he has barely been troubled by any of his rivals to date.

Despite this, most pundits remain sceptical about Wilder’s true pedigree. Much of this has to do with his resume, which boasts plenty of early knockouts but a dearth of top quality opponents and true heavyweight contenders. This was set to change with his proposed bout against the unbeaten heavyweight Luis Ortiz, but the fight was cancelled after the heavy-handed Cuban failed a drugs test.

Then there is Wilder’s style, which remains extremely raw and lacking in variation. While his fitness and conditioning cannot be questioned and he remains capable of relatively quick hand speed, his punches often lack accuracy and he struggles to maintain his balance when trying to finish opponents.

This was evident in his first round stoppage of Audley Harrison, where despite effectively ending the contest with a superb right hand he proceeded to hurl wild and aimless bombs at his ailing opponent and almost fell in a heap on top of the Brit. 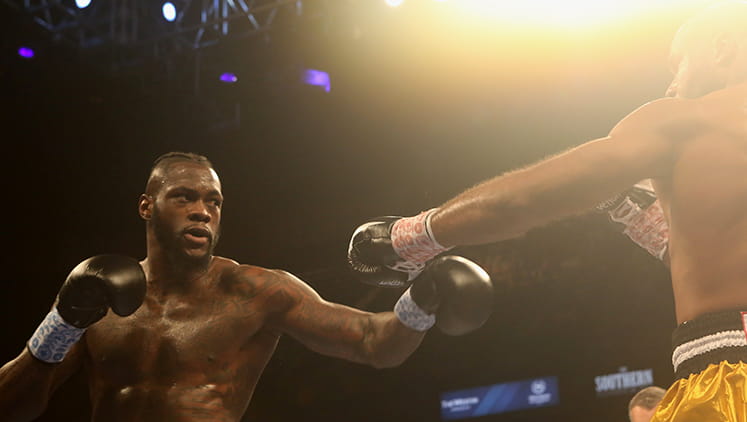 Would Joshua have too much for Wilder?

Wilder is clearly a threat to Joshua’s unification plans, while he will also harbour ambitions of becoming the linear champion.

Despite this, there remains a sense that Joshua would have too much for the talented, but untested, WBC champion. Not only does the UK fighter appear more rounded and accomplished with every single bout (not that he was ever as raw as the aptly-named Wilder), but he can also claim to have dragged himself off the canvas to beat an elite-level fighter.

So, if the fight can be made, we would expect Joshua to prevail. In fact, a more potent threat may lie in the form of the adaptable and ring-savvy Fury, who would certainly find a way to trouble Joshua if he can regain physical and mental fitness.