The feature race at Wetherby on Saturday is the Grade 2 Bet365 Charlie Hall Chase for five-year-olds and upwards. 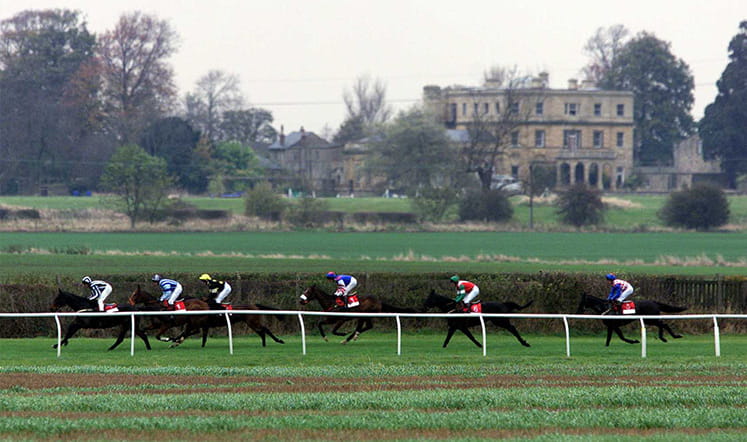 Colin Tizzard reports his stable star to be in great shape as he attempts to repeat last year’s victory. The ten-year-old was still going easily when crashing at the third last at Cheltenham, denying his owners the chance of a £1million bonus following victories at Haydock and Kempton. Jockey Paddy Brennan was inconsolable immediately after the race but gained handsome consolation when winning easily at Aintree in April.

Cue Card started odds-on to complete his season with a win at Punchestown but could finish only fourth behind Carlingford Lough. He usually runs well when fresh and has over a stone in hand on his rivals on official ratings.

His closest market rival is the Nigel Twiston-Davies trained Blaklion, a seven-year-old gelding by Kayf Tara. He was beaten in his first two races over fences as a novice last season before getting off the mark at Cheltenham in December.

Blaklion then chased home Seeyouatmidnight in heavy ground at the same course before winning here at Wetherby in February. His eight lengths win over Definitly Red earned him a place in the RSA Chase field at the Cheltenham Festival which he won in game fashion, holding off the late challenge of Shaneshill by half a length. He then went to Aintree where he finished third to Native River after holding every chance at the second last fence.

Philip Hobbs has two entries with Menorah and Sausalito Sunrise. The former is now eleven years old and has won fourteen of his forty career starts. He won this race in 2014 but was pulled up last year behind Cue Card. He later won the Grade 2 Oaksey Chase at Sandown but was beaten at Perth and Uttoxeter in June. Sausalito Sunrise is a promising staying chaser who won at Cheltenham and Ascot last season. He finished third in the Bet365 Gold Cup at Sandown in April.

There has been no stopping Paul Nicholls this month and the Champion Trainer also has two entered in Saphir Du Rheu and Virak. The former has several entries this weekend including the Bet365 Hurdle at Wetherby and the Sodexo Gold Cup at Ascot.

He looked an exciting chasing prospect after a progressive hurdling career but he is yet to hit the heights over fences. He was tried in blinkers at Sandown in April and has not won since taking a minor chase at Carlisle almost a year ago. Virak was a consistent handicapper last year and was runner-up on four occasions. His best run was a close second to Wakanda in a £56,000 handicap at Ascot in December but he has a lot to do on official ratings.

Dynaste was second to Cue Card in the Charlie Hall last year but was not able to reproduce that effort. The grey did finish second to Silviniaco Conti at Ascot in February but was beaten 20 lengths. Irish Cavalier ran in some Grade 1 chases last season for Rebecca Curtis including the Cheltenham Gold Cup. He was not disgraced in fifth place there and won a valuable handicap in Ireland in April. He should be sharper for his outing behind Art Mauresque at Chepstow earlier this month.

The Last Samuri could have his first run since finishing second in the Aintree Grand National. He had a light campaign last season with just four outings, finishing third at Newcastle before winning at Kempton and Doncaster. He would prefer some cut in the ground so connections will be hoping for rain in the Wetherby area. Wakanda was pulled up at Cheltenham and Aintree in his last two starts for Sue Smith and is best watched until showing signs of a return to form.

The Bet365 Charlie Hall Chase is due off at 3.20 at Wetherby on Saturday and will be screened live on Channel 4.