This was the fight that was labelled, “revenge or repeat” as last time the two boxers met, Bellew was victorious but only after opponent, former heavyweight world champ David Haye had suffered an Achilles injury early on in the fight.

Tony Bellew wasn’t without difficulties himself in the first fight, suffering a broken hand as early as the second round of a gruelling fight that lasted until the eleventh round. The underdog from Liverpool had been fighting in his first fight at heavyweight, previously plying his trade in the cruiserweight division.

In the build up to the fight it was evident that there is very little love lost between the pair with the verbal punching taking place well before the anticipated bout at the 02 arena. While Bellew gave his opponent praise for his great physique he reinforced his desire to “punch his face in”. Accusing Haye of arrogance and underestimating him before the first fight and ridiculing him for not including a rematch clause, meaning that Hayes’s team had to beg for another fight.

Haye for his part seemed a lot more composed going into the rematch. There were none of the temper tantrums that have become a trademark of David Haye in recent years. To a casual observer it seemed like Haye had learnt his lesson and he was refusing to let the scouser get under his skin.

When the fight finally got underway it was Haye who started the most lively. The 37-year-old from Bermondsey took advantage of a slow start from the 35-year-old from Liverpool and used his reach and jab to good effect. At one point Bellew loses his balance and is caught which leaves a nasty mark under the eye, he recovers and ends the round strongly.

The second round belonged to Haye, the jab once again doing much of the damage but with Haye almost showboating by failing to cover up, Bellew starts to get into the fight. Haye lands a good body shot as Bellew retreats. 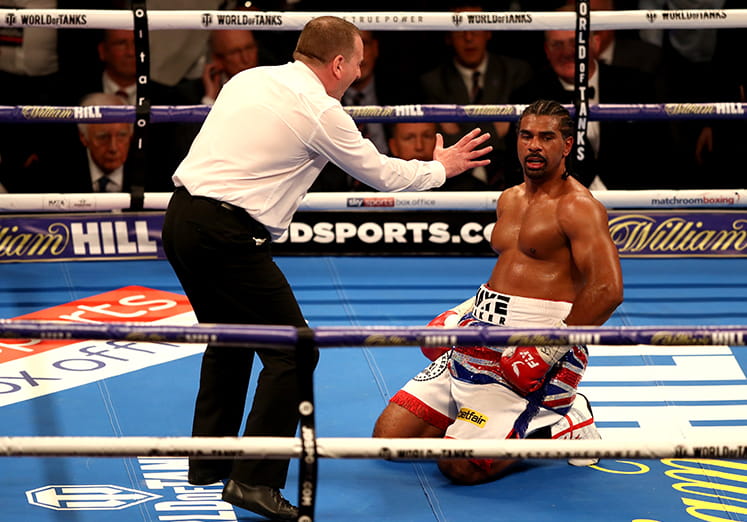 Even early in the third round it looked as if Haye was tiring, Bellew sensed weakness and by the end of the round Haye had been knocked to the canvas twice.

Bellew, sensing the end was near, threw everything at Haye in the fourth. Haye’s legs were gone and it is only due to Bellew slowing the pace that the former world champion survived the round. In the fifth it was all over. Perhaps sensing that David Haye realised that only a knockout punch would save him, the former cruiserweight reverted back to the jab and kept his distance. It was a tactic that worked as he countered a Haye punch and knocked him to the canvas for the third and final time. The referee stopped the fight and there can be no complaints from the Haye camp with the stoppage. The last knockdown saw Haye flat on his face and in reality he never recovered from the punishment in the third round.

Pre-fight, David Haye had stated that only a comprehensive victory over Tony Bellew would prevent him from retiring. The truth is that the former champ has paid a high price for lack of ring activity of the last three years. Injuries haven’t helped but he looks a shadow of his former self and lacked any real plan, relying on his powerful punch to catch Bellew.

Tony Bellew was different, despite a slow start it was evident that he had a game plan. The hunger was there as was the desire to show the boxing world that his victory over Haye in the first bout was no fluke.

Could Bellew provide the opposition for Tyson Fury as he starts his journey back into boxing? It’s probably a bit early for Tyson to fight someone as dangerous as David Bellew but it would be a fantastic and brutal fight and would of course be box office gold, so there is definitely appetite for that fight. As for Haye, you would hope he hangs up his gloves. He no longer has the speed, the accuracy of his younger self is missing and he runs the risk of tarnishing what up to now has been a great career.