The Tingle Creek is one of the most important two-mile chases of the season and is often a guide to the Champion Chase at Cheltenham. Flagship Uberalles won this race for three consecutive seasons between 1999 and 2001. Two-time winners include Waterloo Boy (1991 and 1992), Moscow Flyer (2003 and 2004), Kauto Star (2005 and 2006) and Sire de Grugy (2013 and 2015). Trainer Paul Nicholls has dominated the race with nine victories, most recently with Dodging Bullets in 2014. Leading Irish trainer Willie Mullins won his first Tingle Creek with Un De Sceaux last year, defeating Sire de Grugy and God’s Own.

The race looks set up for the progressive seven-year-old Fox Norton. Colin Tizzard trains the son of Lando who just failed to catch Special Tiara in last season’s Champion Chase. Fox Norton stepped up to two and a half miles at Aintree next time where he comfortably beat Sub Lieutenant by six lengths with his rider easing him down.

His next big target was the Punchestown Champion Chase where he clashed with Ryanair Chase winner Un De Sceaux. Power was pushing along with three to jump but he gradually wore down his rival to win by a length and three-quarters.

Tizzard nominated the Shloer Chase at Cheltenham for his seasonal debut last month. Fox Norton was always travelling well and beat Cloudy Dream by eight lengths. Special Tiara was a further neck away in third place. The Champion Chase is the obvious target for Fox Norton this season.

His task has been made considerably easier by the surprise withdrawal of the Willie Mullins-trained Douvan. He was regarded by many as the banker bet of the Cheltenham Festival in 2017. The 2-9 favourite was never travelling with his usual fluency after reaching for the third fence. He trailed home in seventh place but that was clearly not his form. It would have been fascinating to see if he could recapture his brilliant best but Mullins was not pleased with his final piece of work. 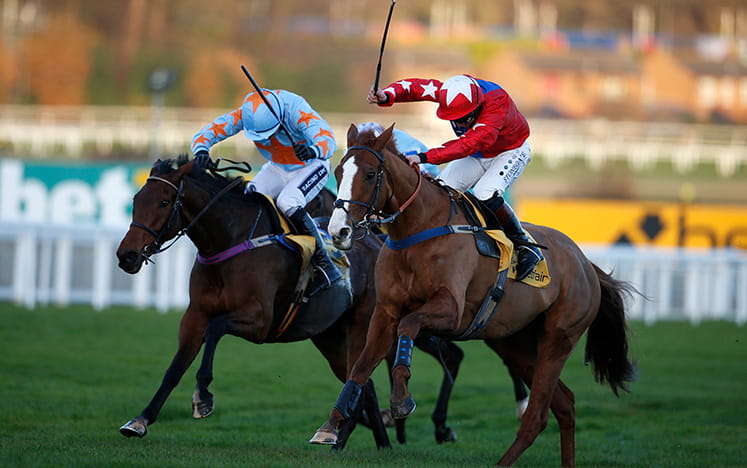 Paul Nicholls bids for an unprecedented tenth winner in the race with Politologue and San Benedeto. Politologue fell at the last at Aintree in April, presenting the race to his stable companion. The grey gained his revenge on San Benedeto at Exeter in November, despite being 4lbs worse off at the weights.

Gary Moore is convinced that Ar Mad has the potential to win a Champion Chase. He was a top class novice but has been plagued by injury problems since. Ar Mad was pulled up at Exeter first time out and is probably best left alone until he shows signs of a return to form. Charbel was a decent novice and looked unlucky when falling two out in the Arkle Chase. Kim Bailey’s six-year-old was unable to reproduce that form at Aintree next time.

The Tingle Creek Chase is due off at 2.55 at Sandown Park on Saturday 9th December and will be shown live on ITV4.