The Tingle Creek is named after a popular chaser of that name who raced in the 1970’s. The race quickly became established as one of the most prestigious two-mile chases of the season and regularly attracts Cheltenham Champion Chasers.

The ante-post betting market for the race this year has been extremely volatile with rumours that Arkle Chase winner Douvan would line-up causing his price to drop dramatically. The rumours proved wide of the mark with Willie Mullins declaring only Un De Sceaux, his first runner in the UK this season.

Un De Sceaux has won fifteen of his twenty races including a brilliant six lengths win in the Arkle in 2015. He started odds-on favourite for the Champion Chase in March but was beaten three and a half lengths by Sprinter Sacre. That was the first time that he had been beaten in a race in which he had completed the course.

Un De Sceaux was well below his best when beaten fifteen lengths by Sprinter Sacre at Aintree next time before returning to winning ways in France in May. That was over an extended two and a half miles and over hurdles and Mullins stepped him up to three miles at Auteuil in June. A combination of the trip and the soft ground found him out and he faded to finish sixth behind Ptit Zig.

Gary Moore will be doubly represented on Saturday with Sire De Grugy joined by the progressive Ar Mad. Sire De Grugy returned to something like his best when defying top weight in a handicap chase at Ascot recently. Regular rider Jamie Moore felt it was the best jumping performance in the horse’s career. The chestnut has won four times over course and distance and will be suited by the small field.

Ar Mad returned lame after winning by a wide margin at Plumpton in February. He required surgery on a front leg and was forced to miss the rest of the season. He had previously battled to a neck victory over Vaniteux in the Grade 2 Novices’ Chase at Kempton in December. Moore is optimistic that he will make up into a genuine Champion Chase contender this season. 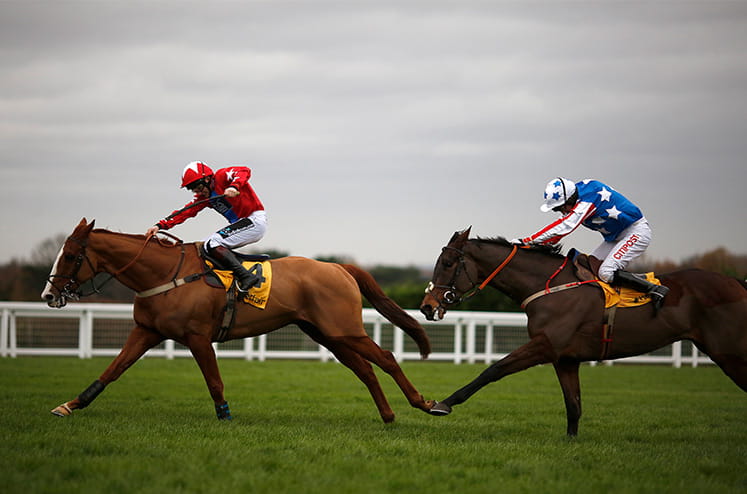 God’s Own returns to best trip at Sandown

Tom George also saddles two runners with God’s Own and Sir Valentino, ridden by Adrian Heskin and Noel Fehily respectively. God’s Own chased home Un De Sceaux in the Arkle last year and has won three Grade 1 races. He beat the ill-fated Vautour at Punchestown in April but connections were looking to step him up in trip this season. He won at Aintree over two and a half miles last season but has been beaten at Aintree and Ascot this winter. He could not peg back Royal Regatta last time and now reverts to two miles.

Sir Valentino beat Garde La Victoire by a short head at Exeter in the Haldon Gold Cup in November. He was racing off a mark of 147 that day which leaves him around a stone below the market leaders on official ratings.

The Tingle Creek Chase is due to take place at 3.00 at Sandown Park on Saturday 3rd December and will be televised live on Channel 4.