The Rise of Konta: Can She Win Her Maiden Slam?

In Miami last week, the rising star of Johanna Konta reached a new peak in the world of women’s tennis. After a superb victory over Venus Williams in the semi-finals of the Miami Open, Konta beat Caroline Wozniacki in straight sets on Saturday to achieve the single biggest win of her career.

Afterwards, the erstwhile and hard-working Konta spoke candidly about the triumph, while highlighting her ambition to become the world number one. Given that she has now risen to seventh in the rankings as a result of the triumph, she is closer to achieving this lofty goal than at any other point in her career to date.

The Rise of Konta: A True Force on the WTP Tour

The 25-year-old Konta has enjoyed a meteoric rise over the last 18 months, having being ranked 146th in the world as recently as June 2015. The Miami Open success marks a definitive watershed in her recent career, however, as it underlines her ability to compete with the top players on the grandest of stages (while also delivering an impressive total of £940,000 in prize money to her bank account, of course).

While Konta’s rise has been truly staggering, it has also been sustained and consistent. Her game has improved incrementally since the summer of 2015, while her results have reflected the hard work and dedication that has gone into becoming an elite-level player. The fact that she was able to beat the former world number one and two-time Grand Slam finalist, Wozniacki, without being at her best also augured well for Konta, as it hints at the mental fortitude and toughness she has developed during her emergence as a genuine force in the woman’s game. 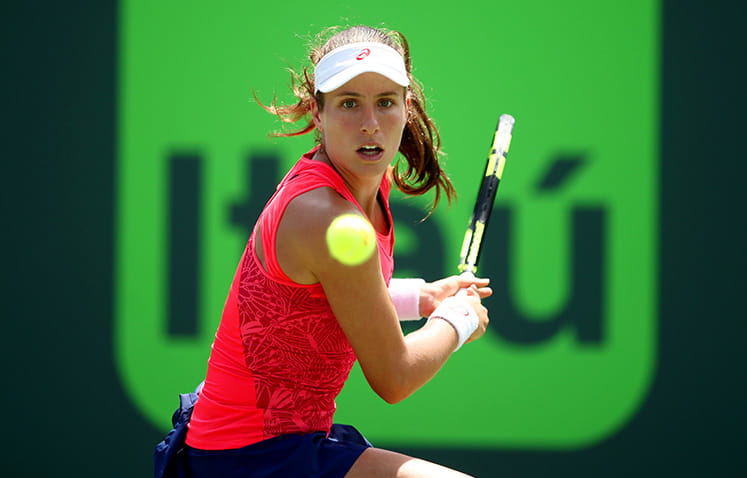 Of course, the question that remains is whether or not the ever-improving Konta can progress further and challenge for her maiden Grand Slam success in 2017. This remains a tall order, particularly given the continued presence of Serena Williams and the quality of players above Konta in the world rankings. Even placed at seventh in the world, she is likely to have to beat two of the top four players on the planet if she is to join the elite-group of Grand Slam winners from the Open Era.

Konta certainly has the game to win a slam in the modern era, with incredibly powerful ground strokes and a metronomic serve capable of blowing away anyone on her day. The work that she did with her now deceased mental coach, Juan Coto, also continues to stand her in good stead, as she boasts the unique ability to focus during big points and deliver her best during crunch times.

This is something that separates outstanding professionals from slam winners, as the latter superior mental strength and an unwavering belief in their own ability.

With these things in mind, there is no doubt that Johanna Konta has the physical, technical and mental attributes to seriously challenge for a Grand Slam in 2017. To achieve a maiden win, however, she will need to be the beneficiary of a little luck, while also continuing to improve in the face of sustained and often brutal competition from her rivals.