The feature race at Newmarket on Saturday is the Group 1 Kingdom Of Bahrain Sun Chariot Stakes.

The one mile race is restricted to fillies and mares aged three years and upwards. French-trained Sahpresa won the Sun Chariot for three consecutive seasons between 2009 and 2011. The most successful trainer in the history of the race is Luca Cumani with six winners, although the last of those was Kissogram in 1998. Notable winners include Swiss Maid (1978), Time Charter (1982), Indian Skimmer (1988), Attraction (2004) and Sky Lantern (2013). Last year’s race was won by Aidan O’Brien’s Alice Springs who defeated Always Smile and Ervedya.

The four-year-old daughter of Dark Angel has won five of her eight races including the Group 3 Atalanta Stakes at Sandown last year. That was her fifth successive win before finding Alice Springs too good in the Group 1 Matron Stakes at the Curragh.

Persuasive has raced twice this season, finishing a promising fifth at Deauville and third at Leopardstown. She was staying on best of all last time when only a length behind Hydrangea and dual 1000 Guineas winner Winter. That form sets the standard in Saturday’s race and Frankie Dettori has been booked for the ride.

Roly Poly was overshadowed by stable companion Winter in the early part of the season. The daughter of War Front gained a deserved Group 1 success in the Falmouth Stakes at Newmarket in July. She then followed up in the Prix Rothschild at Deauville, beating Via Ravenna by a short-neck.

Both victories were achieved by setting the pace but her hat-trick bid floundered at Leopardstown. Roly Poly weakened to finish sixth to Hydrangea and looks held by Persuasive on that form. She is tough and consistent but her market rival may be the fresher of the two after a light campaign.

Qemah is a high class performer on her day, winning the Coronation Stakes as a three-year-old. She returned to Royal Ascot this summer to win the Group 2 Duke Of Cambridge Stakes. Qemah finished a close fourth to Roly Poly at Deauville before finishing fifth in the Matron Stakes. She can be very keen in the early stages and does not look the most straight-forward of rides. 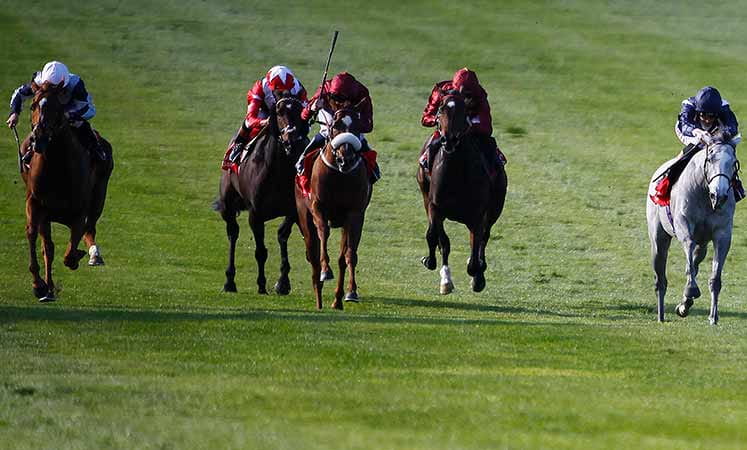 Aljazzi steps up in class at Newmarket

Marco Botti saddles impressive Sandown winner Aljazzi, a four-year-old daughter of Shamardal. She has won four of her ten starts, most recently winning the Group 3 Atalanta Stakes. She recovered from a slow start to beat Nathra by three lengths. Aljazzi was beaten only three-quarters of a length by Qemah at Royal Ascot and is in the form of her life at present.

Andre Fabre won this race with Esoterique in 2015 and is represented this year by Usherette. The Godolphin-owned five-year-old looks held by Roly Poly and Qemah on her form in the summer. The mare bounced back to winning ways in Listed company last time when all out to beat Game Theory by a short-neck.

Siyoushake also makes the journey from France for Freddie Head. The five-year-old has won four of her twenty starts and was third in the Prix Rothschild in July. The Siyouni mare then finished runner-up to Ajman Princess over ten furlongs and finished fourth in this race a year ago.

The Sun Chariot Stakes is due off at 2.40 at Newmarket on Saturday 7th October and will be televised live on ITV4.