The £45,000 Group 3 Solario Stakes at Sandown is one of the first significant trials for two-year-olds over seven furlongs.

The late Sir Henry Cecil is the leading trainer in the history of the race with six wins between 1978 and 1989. The best of them was Oh So Sharp (1984) who went on to win the fillies’ Triple Crown of 1,000 Guineas, Oaks and St Leger.

The ante-post favourite for the Solario Stakes is Masar, trained by Charlie Appleby and ridden by James Doyle.

The son of New Approach just caught Invincible Army on his racecourse debut at Goodwood in May. He then went to Royal Ascot where he finished a creditable third behind September over seven furlongs. That form has been boosted since by runner-up Nyaleti who went on to win a Group 3 by five lengths.

Ryan Moore rides Arbalet for Hugo Palmer, a winner on his third start at Redcar in July. The Dark Angel colt had been beaten four lengths by Hey Gaman at Yarmouth. The winner has since added a Listed race at Newbury and is rated 103. Arbalet needs to find some improvement to trouble the market leaders here.

John Gosden bids to improve his already impressive record in the race with the unbeaten Purser. He is a son of Mizzen Mast and got off the mark first time out at Newbury. Although he only prevailed by a head, Purser was only pushed out to score with a bit in hand. He looks sure to improve for the experience and should go well for Frankie Dettori.

Richard Hannon relies on De Bruyne Horse who needs to bounce back from a poor run at York. The Showcasing colt won the Woodcote at Epsom in June. He later added a listed contest at Vichy when wearing blinkers for the first time. Silvestre De Sousa takes over the reins and De Bruyne Horse will race without the headgear at Sandown. 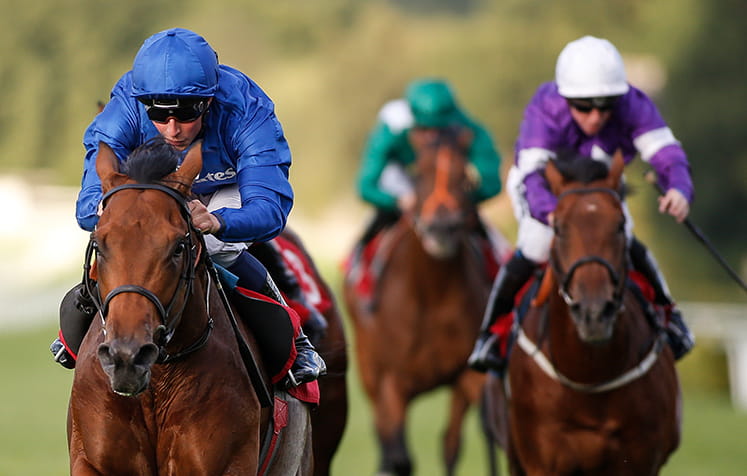 Bookmakers were split earlier this week on the merits of Clive Cox’s Connect, a six lengths winner over course and distance. The price of the son of Roderic O’Connor varied between 11-2 and 10-1. He made the running before pulling away impressively under Adam Kirby. Similar tactics could well be employed on Saturday.

Irish raider Romanised has been keeping top class company. He was a close seventh in the Coventry Stakes at Royal Ascot and sixth in the Group 1 Phoenix Stakes at the Curragh. He was slowly away on both occasions and now steps up to seven furlongs for the first time. Vintager made a winning debut in soft ground for David Menuisier at Newmarket. He started at 33-1 that day and beat a well-regarded Godolphin colt in Symbolization.

The Solario Stakes is due off at 2.25 on Saturday 2nd September and will be televised live on ITV4.