Northern Ireland’s Rory McIlroy fell short in the Open Championship that was held at Carnoustie in Scotland. The 29-year-old last won the Open in 2014 and was one of the favourites to claim the Claret Jug. The surprise winner was Italian Francesco Molinari.

Francesco Molinari’s surprise win at the Open Championship has finally broken the stranglehold that the American players enjoyed in the sport. Previous to this tournament, all of golf’s four major honours were held by US players.

On the final day of play, the 35-year-old was three shots adrift of leaders Xander Schauffele, Kevin Kisner and Jordan Spieth and whilst the trio all dropped shots, the Italian showed great composure in windy conditions to hit a final round of 69 to claim his first ever majors title. This win has seen the Italian’s PGA ranking shoot up from 15th to 6th place.

Rory McIlroy has failed in his quest to claim the 2018 Open. In one of the most exciting and open Masters Tournaments, McIlroy was in contention right up until the last four holes on the final day of action in Scotland. A delightful Eagle on the 14th hole gave the Brit hope of replicating his 2014 victory but the Arnold Palmer Invitational winner came agonisingly close, finishing two shots off the lead.

This second place finish has seen McIlroy move from 8th to 7th in the PGA Tour World Golf rankings.

Since winning the Claret Jug in 2014, McIlroy has finished joint fourth and joint fifth in the Open. The last time the four-time major winner played at Carnoustie was eleven years ago. On that occasion McIlroy won the Silver Medal for being the best amateur as a teenager. He of course is now blessed with so much more experience. Pre-tournament the player stated it was his desire to play with the same youthful abandonment of his first time on this course but with more aggression and this certainly appeared to be the case.

McIlroy’s improved form will see him as one of the favourites for the next majors which are the PGA Championship which starts in August at Bellerive Country Club in Missouri, USA. And while McIlroy will be upset not to have won this competition after coming so close, the 29-year-old was quick to praise surprise winner Francesco Molinari, calling the Italian a worthy champion. 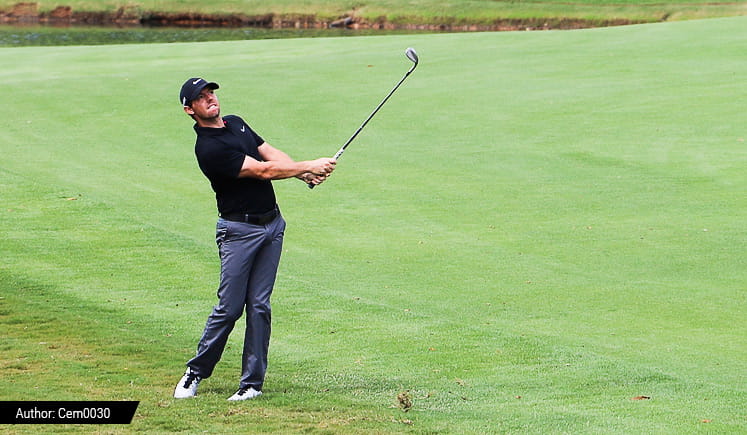 The Tiger is roaring again

It would appear that the rumours of Tiger Woods’ demise have been greatly exaggerated as the 42-year-old produced some of his best golf for years and led the field on the final day. Woods put his previous injury and personal problems behind him and two birdies on the front nine put the 12-time major winner at the top of the leader board.

Carnoustie is widely regarded as one of the toughest places to play golf in the world, something the Americans acknowledge with their nickname of ‘Carnasty’ for the course and it claimed another victim at the 11th.

Using his long-iron on the par 4 11th hole, Woods’ drive found the rough. His second shot didn’t fare much better, landing far left of the green. Woods should have been able to recover but he tried to play a cocky chip shot and could only watch in horror as the ball rolled back towards him. The Tiger of old used to possess an almost magical ability to find the cup but this ability had seemingly deserted him and the American ended with a double-bogey, effectively ending his Open dreams.

Woods ended the final day with a level-par 71, placing him in joint sixth place. If it had not been for the 11th hole it could have been so much better. It will be interesting to see how the golfing superstar fares at the PGA Championship later this year.