Royal Ascot 2017 gets under way on Tuesday 20th June and runs for five days with a massive £6.58 million in prize money on offer.

The Royal meeting is to flat racing what the Cheltenham Festival is to National Hunt racing. There are eighteen Group races including eight Group One events. The Royal Ascot also features high on the social calendar with the finest traditions upheld in the presence of Her Majesty The Queen.

Even if you only have the occasional flutter on the Derby or Royal Ascot, it always pays to check out the best bonus offers. If you don’t yet have an account with an online bookmaker, we’ve listed a few of the best new customer deals so that you can take full advantage.

Existing customers should also keep a look-out for enhanced place terms or special prices on offer for this year’s Royal Ascot. Skybet were the first to offer non-runner – no bet on all eight Group 1 races from the 5th June.

William Hill are offering new customers 3 x £10 free bets after placing their initial £10 bet. The odds must be 1-2 or better and you must stake £10 to win or £10 each-way to qualify for the free bets. William Hill will also pay a 15% free bet bonus if your horse wins by 2 lengths or more on selected UK and Irish flat races! Full details are on their website.

Betway – Money back if you lose in first race at Ascot!

If your horse loses in the first race at Royal Ascot, Betway will refund your stake as a free bet up to £10! Betway are also offering a 100% Deposit Bonus on stakes up to £50. If your selection loses, you will still qualify for a free £50 bet. You must join via the Betway website and place a bet at odds of 1.75 or better.

The action begins at 2.30 on Tuesday with the Group 1 Queen Anne Stakes over a mile. Frankel won this race in brilliant fashion in 2012 and the race always attracts a top class International field. The last four winners have come from Ireland, England, France and America.

Ribchester is expected to get favourite backers off to a flying start after his victory in the Lockinge Stakes. American Patriot will represent the United States while Heshem could fly the flag for France.

The King’s Stand Stakes at 3.40 looks the most competitive Group 1 race of the week. Lady Aurelia is likely to start favourite for Wesley Ward while former stable companion Acapulco is now with Aidan O’Brien. French sprinter Signs Of A Blessing needs rain while you could not rule out 2015 winner Goldream if the going remains fast.

It is difficult to look beyond Churchill in the St James’s Palace Stakes at 4.20. The English and Irish Guineas winner is set to clash with Newmarket runner-up Barney Roy.

The Jersey Stakes opens the second day at 2.30 and this can go to Godolphin’s Dream Castle. He was second in the Greenham Stakes and finished a creditable fifth in the 2000 Guineas. The drop back to seven furlongs looks tailor-made for the colt.

The Duke Of Cambridge Stakes at 3.40 on Wednesday features impressive Epsom winner Laugh Aloud. She is progressive but faces a classy opponent in last year’s Coronation Stakes winner Qemah. She can be forgiven her unlucky run at Lingfield Park last time. The Prince Of Wales’s Stakes at 4.20 is difficult to assess with several of the market leaders holding alternative engagements. Jack Hobbs and Highland Reel are both entered in the Hardwicke Stakes on Saturday. One horse who is likely to line-up here is French raider Mekhtaal who could be over-priced at 20-1.

The Royal Hunt Cup is the big betting race of the day at 5.00. The Newbury Spring Cup could provide the answers here with winner Banksea and fourth-placed George William both weighted to run well. G K Chesterton and Fastnet Tempest are others to consider in a wide open race. 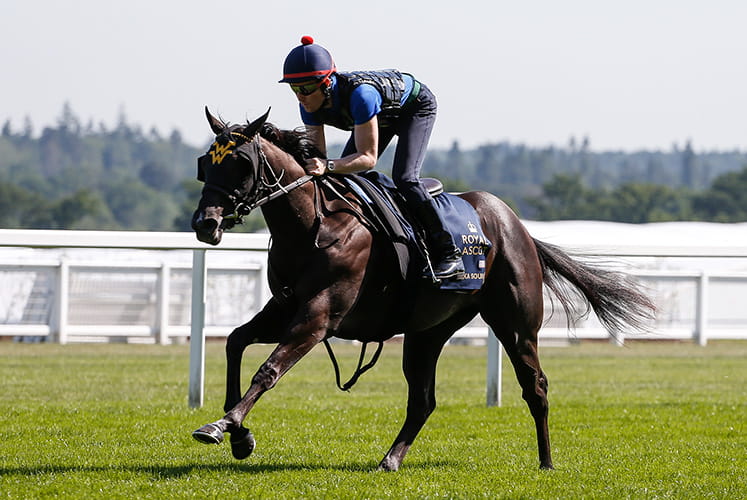 Sir Michael Stoute withdrew Mirage Dancer from the Derby after a disappointing piece of work. He had caught the eye at Chester and would be an interesting runner if taking his chance in the Hampton Court Stakes at 3.05.

The highlight of the day on Thursday is the Ascot Gold Cup at 4.20, one of the longest flat races in the calendar. Order Of St George was a worthy winner last season and bids to retain his crown for Aidan O’Brien. With Vazirabad not making the trip from France, he faces a familiar group of Cup rivals in Big Orange, Sheikhzayedroad and Quest For More.

One of the best bred horses at the meeting is Sir Michael Stoute’s Mori, by Frankel out of the Breeders’ Cup winner Midday. She is fancied to provide her sire with a Group 2 success in the Ribblesdale Stakes at 3.40. The unbeaten Naughty Or Nice could also run well at long odds.

The King Edward VII Stakes at 3.05 is known as the Ascot Derby but Epsom runners have a poor record here. One who may buck the trend is Salouen who was hampered twice in the Classic and has always looked likely to excel over this trip.

The Commonwealth Cup at 3.40 sees the unbeaten Caravaggio bidding to extend his winning run to six. He faces some speedy rivals in Blue Point and Harry Angel. American raider Bound For Nowhere has been working with Lady Aurelia and won’t be short of pace while Fas has high class form in France.

Winter will be regarded by many as the banker bet of the week in the Coronation Stakes at 4.20. The grey has captured both the English and Irish 1000 Guineas and is difficult to oppose. John Gosden is likely to rely on Dabyah who could prove dangerous if there is sufficient give in the ground.

The Hardwicke Stakes at 3.40 has a high class entry but could cut up if the market leaders opt for the Prince Of Wales’s Stakes. Highland Reel was narrowly beaten in this race last year by Dartmouth on ground softer than he likes. He beat Frontiersman at Epsom in courageous fashion and could meet that rival again here. Dartmouth will bid to win for Her Majesty for the second consecutive season while stable companion Poet’s Word is another with each-way claims.

The Diamond Jubilee Stakes at 4.20 sees Limato return to action after a disappointing run in Dubai. His trainer Henry Candy blamed cloud seeding for his defeat there when the going turned soft after some torrential downpours. A repeat of those weather conditions would delight connections of Tasleet who bolted up in sticky ground at York last month.

Royal Ascot 2017 will be televised on ITV with all thirty races shown live. There is an early morning preview show at 10am on ITV4 with the live coverage beginning on ITV at 1.30 each day.