The 3.15 at Ascot on Saturday is the £1.1 million Group 1 Queen Elizabeth II Stakes over a mile.

Ribchester bids to go one better at Ascot

William Buick rides Ribchester for Richard Fahey and Godolphin. The four-year-old has won six of his fourteen races. He claimed his third Group 1 victory of the season in the Prix du Moulin at Chantilly last month, beating Taareef by three-quarters of a length.

Ribchester suffered a shock defeat in very testing ground when beaten a neck by Here Comes When at Goodwood. He ran in snatches that day in a very unsatisfactory contest. He handles all but extreme conditions and should relish the good ground at Ascot.

Churchill looked certain to emerge as a champion three-year-old miler earlier in the year. He was a good winner of the 2000 Guineas in England and Ireland. He suffered only the second defeat of his career when fourth at Royal Ascot. He stepped up to ten furlongs when second to Ulysses at York in August. He faded tamely in the Irish Champion Stakes and now reverts to a mile.

Andrew Balding is represented by the progressive Beat The Bank, a three-year-old son of Paco Boy. He suffered his only defeat in the Jersey Stakes at Royal Ascot. Beat The Bank left that form well behind when winning comfortably at Newmarket in July. He followed up in a Group 3 at Goodwood before slamming Sir John Lavery in the Group 2 Joel Stakes.

Andre Fabre sends Al Wukair, a three-year-old colt by Dream Ahead out of a mare by Machiavellian. He ran a terrific race when third in the 2000 Guineas at Newmarket in May. Punters backed Al Wukair into odds-on favourite in France next time but he was beaten by Taareef. He returned to winning ways at Deauville when beating Inns Of Court by a short-head. 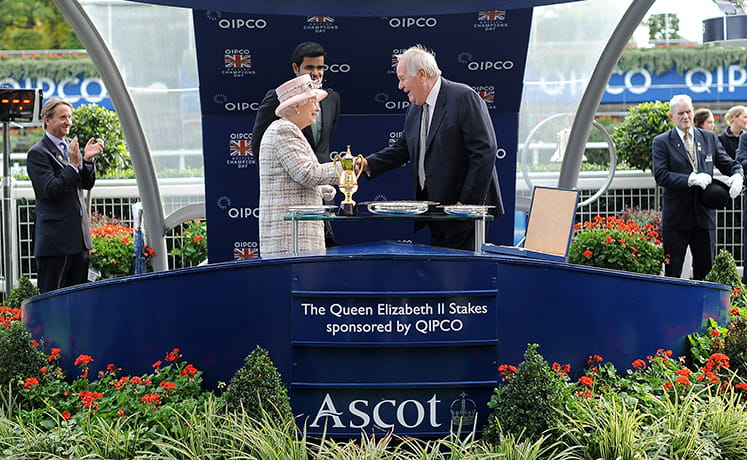 Soumillon aboard Thunder Snow at Ascot

Christophe Soumillon retains the ride on Godolphin’s Thunder Snow for Saeed bin Suroor. The horse put up a puzzling display when refusing to race and bucking repeatedly in the Kentucky Derby. Soumillon was quick to pull up the son of Helmet who has shown no signs of a repetition.

Thunder Snow was third at Royal Ascot before winning the Group 1 Prix Jean Prat at Chantilly. He was only a quarter of a length behind Al Wukair on his most recent start at Deauville in August. He looks held by Churchill on Irish 2000 Guineas form.

The pick of the remainder could be Persuasive, trained by John Gosden and ridden by Frankie Dettori. The filly has been running well against her own sex, most recently behind Roly Poly in the Sun Chariot Stakes at Newmarket.

The Queen Elizabeth II Stakes is due off at 3.15 at Ascot on Saturday and will be televised live on ITV.