The Prix de Diane at Chantilly is also known as the French Oaks and is restricted to three-year-old fillies. It is run over an extended ten and a half furlongs, a furlong and a half shorter than the Epsom Classic. Her Majesty The Queen won the race with Highclere in 1974 while other English-trained winners include Mrs Penny (1980), Indian Skimmer (1987) and Rafha (1990).

This race is one of the few Group 1 events to elude leading Irish trainer Aidan O’Brien. That is largely due to its proximity to the Epsom Oaks and Royal Ascot. He has declared Rhododendron, runner-up in the 1000 Guineas and the Oaks this season.

The daughter of Galileo was made odds-on favourite for the Oaks on the strength of her second to Winter at Newmarket. Ryan Moore looked confident at the quarter of a mile marker at Epsom but was outstayed by Enable and beaten by five lengths. Rhododendron finished six lengths clear of the third and should be suited by the drop in trip.

The favourite is Shutter Speed, trained by John Gosden and ridden by Frankie Dettori. She is by Dansili out of a mare by Oasis Dream and won the Musidora Stakes at York. She had previously beaten stable companion Enable at Newbury but is not guaranteed to stay a mile and a half. She races in the same colours as the Oaks winner so the French equivalent was an obvious target. Dettori reported that the soft ground was against her at York and she will be better on a faster surface.

The shortest-priced French-trained filly is Terrakova, a daughter of the great Goldikova. She is by Galileo so there are no concerns on stamina. Terrakova won the Prix Cleopatra at Saint-Cloud, beating Panthelia and Penny Lane. Trainer Freddy Head had no hesitation in nominating the French Oaks as her next race. She looked in a little difficulty on the inside when the pace quickened but she picked up well for Maxime Guyon to win decisively.

Panthelia was only beaten three-quarters of a length at the line, a big improvement on her previous form. The daughter of Gentlewave had finished sixth on her last start in a Listed contest at Toulouse. Pascal Bary saddles Senga in the colours of Flaxman Stables Ireland Limited.

She has won two of her six races and started favourite for the French Guineas in May. She faded disappointingly in the straight that day to finish well beaten behind Precieuse. Senga never looked happy when third of five at Chantilly last time behind La Sardane over a mile. She should improve with the step up in distance. 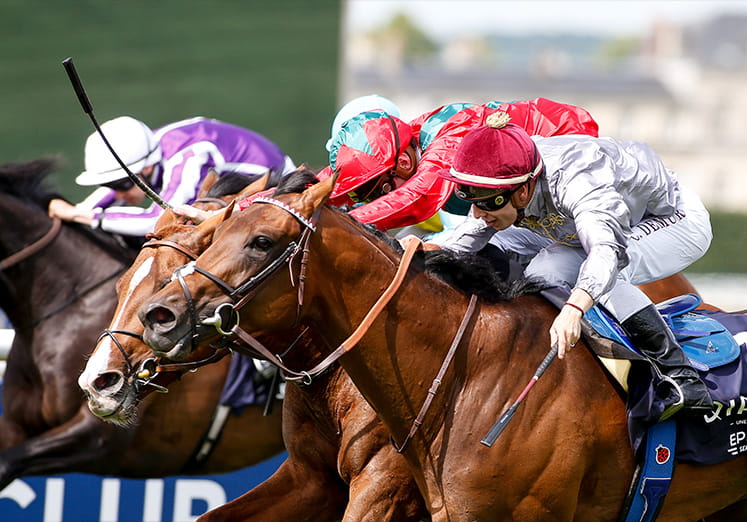 Godolphin’s hopes rest with Prix de Royaumont winner Kitesurf, a daughter of Dubawi trained by Andre Fabre. She has only raced on soft ground so far and the forecast is for fast ground on Sunday. Kitesurf has also been running over longer distances so could find herself outpaced here.

Monroe Bay won a Listed race at Chantilly in first-time blinkers last month. She had finished last behind Sobetsu on her previous outing at Deauville. Alex Pantall saddles Sistercharlie, the winner of the Prix Penelope at Saint-Cloud over this distance. She stuck on well to beat Listen Inn with three other fillies close-up behind. That may not have been the strongest trial and this looks a much tougher test.

Onthemoonagain is a filly by Cape Cross with a Listed victory at Toulouse over this distance to her credit. That was her first race since finishing third in a Group 3 at Deauville in October. She had Panthelia well beaten in sixth that day and could be generously priced at 25-1.

The Prix de Diane will take place at Chantilly at 3.15 on Sunday 18th June and will be televised live on Attheraces.