The $16million Pegasus World Cup is the richest horse race in the world and takes place at Gulfstream Park this weekend.

It costs $1million to enter a horse with a maximum twelve runners. An extra $4million is added to the purse by the Stronach Group. The race takes place over nine furlongs with the inaugural running taking place last year. The race was won by American-trained favourite Arrogate who defeated outsider Shaman Ghost.

The odds-on favourite this year is Steve Asmussen’s Gun Runner, an impressive winner of the Breeders’ Cup Classic. He will be named American Horse of the Year and will be retired to stud immediately after the Pegasus World Cup.

The five-year-old son of Candy Ride has won ten of his seventeen races and over £7million in prize money. He finished runner-up to Arrogate in the Dubai World Cup at Meydan in March. He has shown himself to be a Champion in his own right since, defeating Collected and West Coast with a brilliant all-the-way win at Del Mar. Arrogate was well beaten in fifth place while English and Irish 2000 Guineas winner Churchill was back in seventh. He has been drawn wide in barrier ten so will need to be away sharply if he is to make the running here.

Bob Baffert’s Collected and West Coast are both in opposition again at Gulfstream Park. Collected won the $1million Pacific Classic prior to his excellent run in the Breeders’ Cup. The five-year-old was expected to win the Grade 2 San Antonio Stakes at Santa Anita on Boxing Day. He finished a disappointing third behind Giant Expectations. Jockey Mike Smith felt that he had given the horse a bad ride that day and expects him to bounce back in the Pegasus.

Stable companion West Coast is a four-year-old colt by Flatter out of a mare by Honour And Glory. He won the Grade 1 Travers Stakes and the Pennsylvania Derby before finishing third at Del Mar. He was outpaced at the quarter of a mile pole before renewing his effort to be beaten three and a half lengths. He arguably has more scope than his rivals, has a perfect draw in barrier two and a bold run is anticipated.

Sharp Azteca has been placed in the Dubai World Cup and twice at the Breeders’ Cup. He was a deserving winner of the Grade 1 Cigar Mile at Aqueduct last month but this will be his first run at nine furlongs. He likes to race up with the pace and it could be fast and furious with Collected and Gun Runner also certain to be prominent.

Seeking The Soul earned his place in the field by winning the Grade 1 Clark Handicap last time out. Some impressive homework persuaded connections to let him take his chance ahead of stable companion Forever Unbridled.

Britain’s first ever runner in the race is Toast Of New York, trained by Jamie Osborne. He was retired to stud in 2015 but made a surprise return to racing at Lingfield in December. He wore a hood for the first time that day and defeated Petite Jack by a length. Toast Of New York finished a close second to Bayern at the 2014 Breeders’ Cup. Frankie Dettori has been booked for the ride but it would be a truly remarkable story for the seven-year-old. 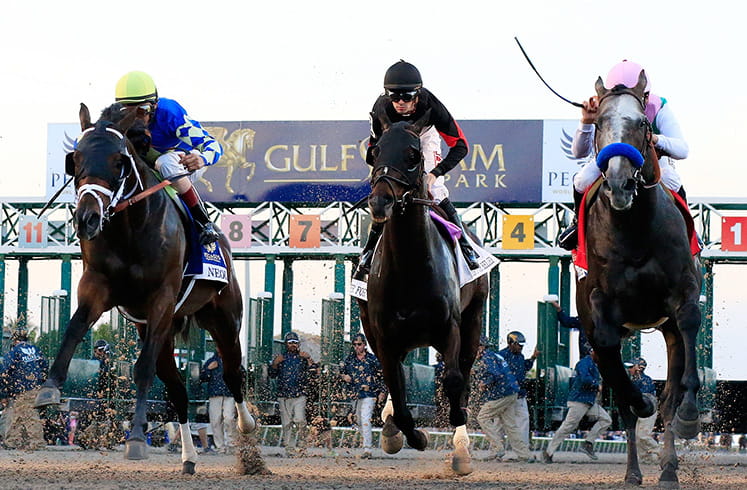 The six-year-old mare has been moved from John Sadler to Chad Brown to be prepared for this race. She will then be retired to the paddocks and bred to Triple Crown winner American Pharoah. Four-year-old Giant Expectations was a shock winner of the San Antonio Stakes, upsetting the odds-on Collected. Most pundits feel that the favourite did not give his true running that day and Giant Expectations (drawn widest of all in gate 12) is a 28-1 outsider.

The Pegasus World Cup is due off at 10.40pm (UK time) on Saturday 27th January and will be screened live on Attheraces.