The highlight of the card at Newmarket on Saturday is the Listed King Charles II Stakes at 2.40.

Hannon saddles the ante-post favourite again this season in Larchmont Lad, a colt by Footstepsinthesand. He is taking a big drop in class after finishing ninth of ten in the 2000 Guineas behind Churchill.

Larchmont Lad was a tough and consistent juvenile, winning at Sandown and Newmarket. He was also beaten only a short-neck when third to Rodaini at Doncaster in September. He finished fifth to Eminent in the Craven Stakes and was virtually the same distance behind that rival in the Guineas. Hannon has entered Larchmont Lad for the Irish 2000 Guineas and the St James’s Palace Stakes at Royal Ascot.

Hannon could also run Eqtiraan, beaten narrowly in a Newmarket handicap at the Guineas meeting. He had failed to see out the mile on his previous start and ran a much better race over six furlongs. That could eventually prove to be his optimum trip.

Beat The Bank has each-way chance at Newmarket

Saeed bin Suroor saddles the unbeaten colt Desert Frost, a winner at Doncaster over six furlongs. He is by Dark Angel out of a mare by Exceed And Excel. He started odds-on for his racecourse debut and ran out a comfortable winner. The bare form gives him a lot to do here but he is clearly a colt with plenty of potential.

Beat The Bank joined Andrew Balding’s stable from Ireland this spring and made a winning start at Newmarket in April. He got the better of Salsabeel by a neck with Via Egnatia back in third. The third horse was beaten off a mark of 99 at Chester last week but raced very keenly that day. Beat The Bank looks a progressive sort and receives a useful 5lbs from the favourite. 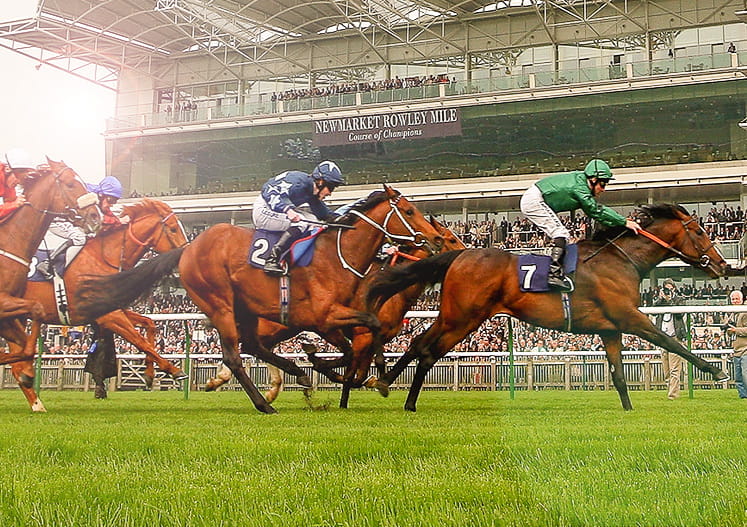 Taamol suited by drop in distance

Sir Michael Stoute trained Thikriyaat to win this race last season and relies on Taamol this time. The son of Helmet looks held by Larchmont Lad on Doncaster form last season. There was good support for him on his seasonal reappearance at Newcastle last month. He travelled smoothly into contention but weakened to finish fourth to Forest Ranger. That was over a mile and the return to seven furlongs could be in his favour.

Seven Heavens has been a rare disappointment so far this season for John Gosden. The Frankel colt was third in a first-time hood at Newmarket in April. He then reverted to sprinting at Ascot but was easily brushed aside when seventh to Blue Point. Mark Johnston has two entries with Masham Star and Sutter County, both fully exposed. The former ran well at Chester last week when beaten by Mutawatheb in a handicap off a mark of 100. Clive Cox’s Kodiline has not raced since August when beaten at odds-on in a Listed race at Ripon.

The King Charles II Stakes is due off at 2.40 at Newmarket on Saturday 20th May and will be televised live on ITV.