The feature race at Newmarket on Sunday is the £500,000, Group 1 1000 Guineas over a mile at 3.35. The race is restricted to three-year-old fillies and was dominated by Aidan O’Brien last year who saddled the first three to finish.

It would be remarkable if O’Brien was able to repeat last year’s 1,2,3 but the Ballydoyle trainer is very strongly represented. Rhododendron is the market leader, the winner of the Group 1 Dubai Fillies’ Mile in October. She stayed on strongly to beat stable companion Hydrangea by two-and-a-quarter lengths over course and distance.

That was the third time that she had clashed with Hydrangea, beating her narrowly at the Curragh in August. She finished behind her rival at the same track in September but reversed the form categorically at Newmarket. Both fillies look likely to stay beyond a mile with the Epsom and Irish Oaks among their entries.

Hydrangea should benefit from her recent run at Leopardstown where she was all out to win over seven furlongs. That was her first outing since a disappointing run at the Breeders’ Cup in November. Winter was only a head behind Hydrangea at Leopardstown, a big improvement on her maiden success at Dundalk in August. The Leopardstown form has already been boosted by the third horse winning a Group 3.

Joseph O’Brien saddles Intricately who sprang a 25-1 surprise in the Moyglare Stud Stakes last September. She upset the Aiden O’Brien pair that day but has been beaten in both subsequent outings.

John Gosden looks set to run Daban here in preference to Dabyah with her stable companion heading to France. The reasoning is that Dabyah already has experience travelling abroad and Daban looks better equipped to handle the fast ground.

The daughter of Acclamation beat Unforgetable Lady by three-quarters of a length at Newmarket in the Nell Gwyn Stakes. That confirmed the promise of her debut win on the all-weather at Kempton in November. Frankie Dettori was able to ease her down in the closing stages and she could confirm the form with the runner-up.

Andrew Balding’s Poet’s Vanity was beaten two lengths into third while Sea Of Grace could only finished fifth. Poet’s Vanity should improve but there seems no obvious reason for either of those fillies to reverse the placings. 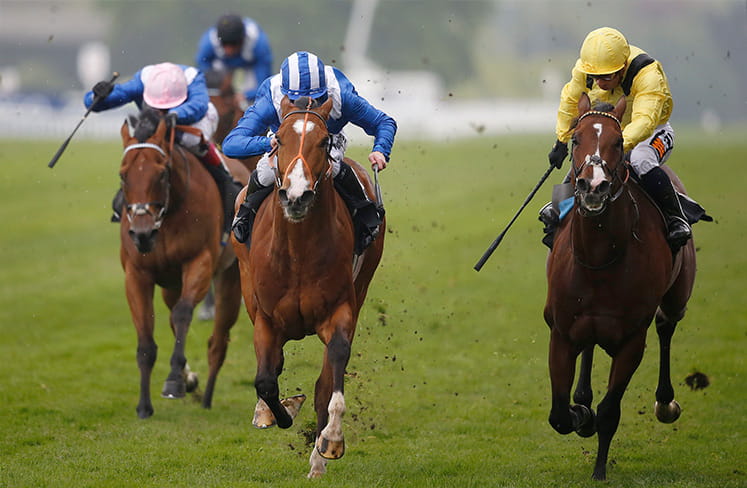 Roger Charlton has elected to go straight to the 1000 Guineas with Fair Eva. She is a chestnut filly by Frankel who was ante-post favourite after winning at Ascot last summer. She was beaten by another Frankel filly in Queen Kindly at York next time before chasing home Spain Burg at Newmarket. Her connections have been delighted with her work this spring and are optimistic that she can return to her Ascot form.

The dark horse of the race is the unbeaten Talaayeb, trained by Owen Burrows. She is by Dansili out of a mare by Rahy and won a Newmarket maiden in September. She overcame trouble in running to beat Neshmeya by two-and-a-half lengths and future entries include the Coronation Stakes and the Epsom Oaks.