The Lockinge has been won by some star performers over the years, including Brigadier Gerard (1972), Kris (1980) and Frankel (2012). Pall Mall won the inaugural running in 1958 and repeated his victory in 1959. Welsh Pageant (1970-71) and Soviet Line (1995-96) were also successful on two occasions. Sir Michael Stoute has won the race a record seven times, most recently with Peeress in 2006. Godolphin have also won the Lockinge seven times including last year’s race with Belardo.

Richard Fahey saddles the favourite here in Ribchester, winner of the Group 1 Prix Jacques le Marois last August. The four-year-old son of Iffraaj was third to Galileo Gold in the 2000 Guineas but reversed the form at Deauville.

Ribchester then finished a close second to Minding in the Group Queen Elizabeth II Stakes at Ascot. He once again finished ahead of Galileo Gold in fifth. He ran well over nine furlongs on the Dubai Turf in March and won’t be inconvenienced by the rain-softened ground.

Frankie Dettori rides Galileo Gold for Hugo Palmer who will be having his first race since October. Galileo Gold followed up his Guineas victory with a good second to The Gurkha in the Sussex Stakes at Goodwood. He was not as his best at Deauville and Ascot but will be difficult to beat if able to reproduce his Newmarket form.

There has been good support for David Simcock’s Lightning Spear in the betting this week. The six-year-old finished a fine third to Tepin in soft ground at Royal Ascot last summer. He gained a well-deserved success in the Group 2 Celebration Mile in August. Lightning Spear finished just behind Ribchester at Ascot in October and he usually goes well fresh.

Aidan O’Brien is represented by Somehow, a four-year-old filly by Fastnet Rock out of the smart mare Alexandrova. She raced over a mile and a half last season and finished a remote fourth in the Oaks at Epsom. Somehow dropped back to nine furlongs to win the Group 3 Snow Fairy Stakes at the Curragh. She is also fit from victories at Gowran Park and Newmarket, most recently winning the Group 2 Dahlia Stakes. 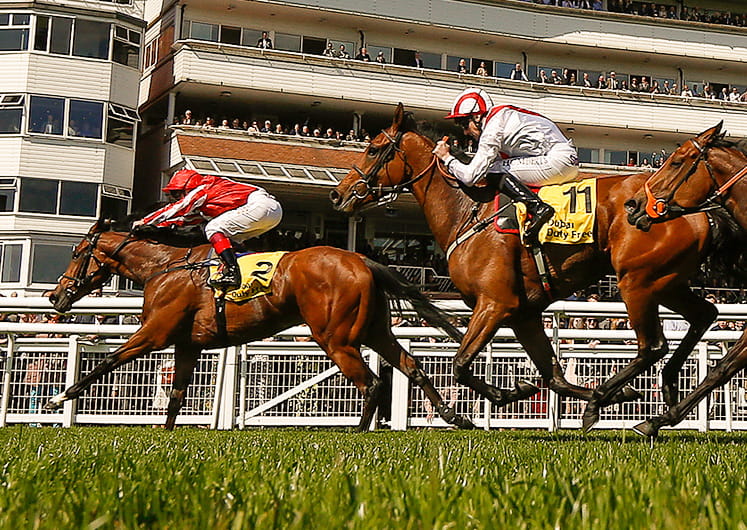 The midweek rain has tempted punters to back Aclaim at long odds. Martyn Meade’s four-year-old had won twice in testing conditions, including over seven furlongs here in September. He followed up that success by beating Lumiere by a length in the Group 2 Challenge Stakes in October. That was over seven furlongs on good to firm ground. Aclaim has won over a mile but that was in a handicap at Ascot when rated only 97. He is up to 114 after his latest victory.

Dutch Connection would be a leading contender on his best form for Charles Hills. He beat Home Of The Brave over seven furlongs at Goodwood in July but has run below form in two subsequent outings. He was only ninth in this race 12 months’ ago and he is arguably better in a fast-run seven furlong race.

The Lockinge Stakes is due off at 3.30 at Newbury on Saturday 20th May and will be televised live on ITV.