Andy Murray has been forced to withdraw from this year’s Wimbledon, dashing hopes of the Briton repeating his successes of 2013 and 2016. The 31-year-old faced a race against time to be match-fit for the world’s most prestigious tennis competition.

The former British number 1 has conceded defeat in his battle to be fit enough to compete in this year’s Wimbledon. The two-time Wimbledon champion has been recovering from hip surgery and only returned to competitive action last month after an absence of a year from the sport.

Murray’s participation at Queen’s had raised hopes that the Scot would be competing but the player decided that the intensity of the tournament would be too much at this stage. In announcing his withdrawal the three grand slam winner and 8 times runner up said he regretted not being able to take part but wanted to spend time on his recovery.

Tennis great Roger Federer has offered his support to Murray and has backed Murray to regain his fitness and match sharpness. The eight-time Wimbledon champion told reporters that professional players never forget how to play and likened playing tennis to riding a bike and brushing your teeth.

Like Murray, Federer has had his own injury woes and missed most of the 2016 season, suffering with back and knee injuries. This led to the 36-year-old missing the clay-court tournaments for the last two years to minimise the chances of his injuries reoccurring, something Murray may well consider for next year.

Federer started his own campaign to extend his Wimbledon record in emphatic fashion, taking just 79 minutes to see off Serbia’s Dusan Lajovic 6-1, 6-3, 6-4. The next round draw also looks easy for the 20-time Grand Slam champion; he will face either Slovakia’s Lukas Lacko who is ranked 73 or France’s Benjamin Bonzi who is a lowly 284th in the ATP rankings. 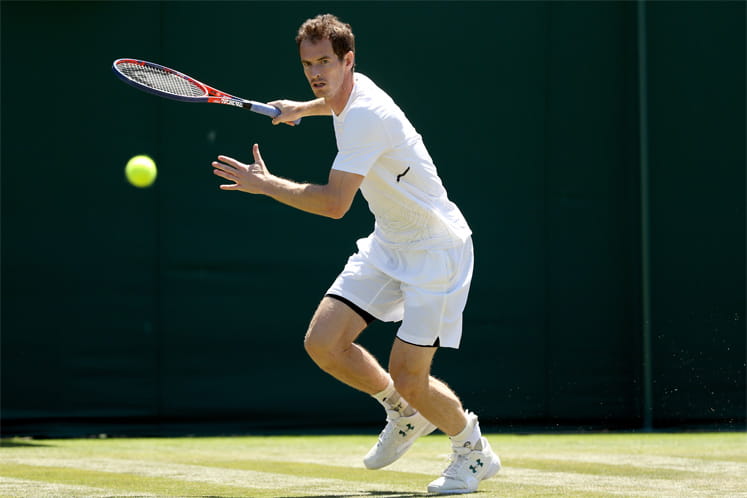 With Murray not taking part at Wimbledon this year, British hopes will mainly rest on the shoulders of Kyle Edmund. It is possible that Edmund may have been indirectly responsible for Andy Murray’s decision to not take part at Wimbledon, Edmund faced the Scot at Eastbourne recently and won the game in two sets, 6-4 and 6-4 before narrowly losing to Mikhail Kukushkin in the quarterfinals 7-5, 6-3, 6-1.

Edmund was born in South Africa but moved to Beverley near Hull as a young child. Edmund won his only major tournament in 2015 by winning the Davis Cup but despite being seeded 21st for Wimbledon the 23-year-old has never progressed past the second round.

He faced a relatively easy opponent in the first round, Australian Alex Bolt who is ranked at 105 in the world. Edmund made light work of the match, clinching the win in three sets 6-2, 6-3 and 7-5. His win % on his 1st serve was a very credible 83%.

His next opponent, on paper at least should be just as easy as he faces American Bradley Klahn who is ranked a lowly 163 and returns after a year out of the sport with an injury. British tennis fans will be optimistic that the youngster can build on his excellent showing at the Australian Open where the current British number 1 reached the semi-final stage.