The feature race at Newbury on Saturday is the Group 2 Mill Reef Stakes for two-year-olds over six furlongs.

The race has been won by some high class juveniles including Forest Flower back in 1986. She raced in the same colours as Mill Reef and went on to win the Irish 1000 Guineas the following season. Other notable winners include Zafeen (2002), Dark Angel (2007) and Ribchester (2015). Last year’s race was won by Harry Angel for Clive Cox. He looks certain to finish the season as champion sprinter after winning the July Cup and the Haydock Sprint Cup.

Invincible Army and Nebo are joint top-rated for the Mill Reef Stakes on 109. Invincible Army is the clear favourite following his comfortable victory in the Group 3 Sirenia Stakes at Kempton. James Tate’s colt had been slightly disappointing when fourth in the July Stakes but has done little wrong since. He was beaten by Havana Grey at Goodwood and chased home Sands Of Mali at York.

Nebo ran well in defeat at Newmarket and Goodwood but was only sixth in the Gimcrack Stakes at York. There were no obvious excuses for him that day and he looks held by Invincible Army.

James Garfield represents the George Scott stable with Frankie Dettori aboard. He won a Doncaster maiden by six lengths before finishing fourth to the impressive Expert Eye at Goodwood. That form received a boost when fifth-placed Seahenge won the Group 2 Champagne Stakes at Doncaster last week. Third home Mildenberger also won on his next start in a Listed race at Salisbury.

James Garfield just failed to repel the late challenge of Wells Farhh Go over seven furlongs at York and drops back in trip at Newbury. Lansky ran on from the rear to finish third at York but has nearly four lengths to make up on James Garfield.

Enjazaat up in class at Newbury

Enjazaat was an easy Yarmouth maiden winner in June before finishing sixth in the July Stakes. He reappeared in a Listed race at Ripon last month and readily accounted for Tip Two Win. The Acclamation colt now steps back up in class.

Grand Koonta was taken out at Doncaster last week due to the rain softened ground. Trainer Clive Cox will be hoping that the ground continues to dry out at Newbury. The Dark Angel colt has not raced since finishing eighth in the July Stakes, over five lengths behind Cardsharp.

Silvestre de Sousa rides Staxton for Tim Easterby, the winner of two of his four races. Both of his victories have been at Haydock but he looks held on Gimcrack Stakes form. The son of Equiano was beaten nearly five lengths and may struggle to reverse the form with Invincible Army. 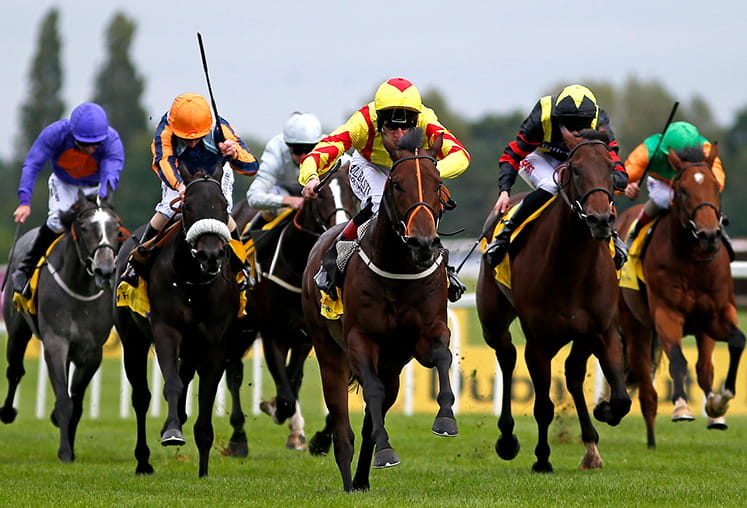 The Mill Reef Stakes is due off at 2.50 at Newbury on Saturday and will be televised live on ITV4.