The big betting race on Saturday is the £150,000 Midlands Grand National at Uttoxeter over four miles and two furlongs. There are 24 fences to be jumped and this marathon race invariably takes place in heavy ground.

Uttoxeter takes centre stage at the end of the busiest betting week of the year in National Hunt racing. Notable previous winners of this race include Cheltenham Gold Cup winners The Thinker (1986) and Synchronised (2010). David Pipe trained the winner for four consecutive seasons between 2011 and 2014. Last year the race was won by Regal Flow, trained by Bob Buckler and ridden by Sean Houlihan.

Top weight is set to be carried by American, trained by Harry Fry and ridden by Noel Fehily. He has always been held in high regard but has been plagued by injury problems. The nine-year-old was racing for the first time in almost a year when pulled up at Newbury in December.

Ms Parfois finished sixth in the same Newbury race, beaten 40 lengths behind Sizing Tennessee. The mare was a tough and consistent novice chaser but this will be only her second start since undergoing wind surgery in August.

David Pipe’s hopes of a fifth win in the race rest with the ten-year-old Dell’Arca. He has been a smart hurdler in the past but has only one victory from eleven starts over fences. He was last seen finishing third to Chef D’Oeuvre at Haydock in December in soft ground. Arthur’s Gift comes here in good form after winning by five lengths at Carlisle in February. He has been raised 8lbs by the handicapper and has a further mile and a quarter to travel.

Milansbar is another in the veteran stage at the age of twelve. He gained his biggest victory in the Warwick Classic Chase last season and was an honourable fifth in the Aintree Grand National. He was beaten ten lengths in this race last year by Regal Flow. Connections will have taken encouragement from his latest effort when fourth to Carole’s Destrier in the Greatwood Veterans’ Chase.

Regal Flow has also been short of his best since winning here last year. He finished a remote third to Samuel Jackson last time out at Taunton and will race off an identical handicap mark on Saturday.

Ballydine has looked very one-paced at times this season but could come into his own over this trip. Charlie Longsdon’s nine-year-old was only three-quarters of a length behind Carole’s Destrier in the Mandarin Chase at Newbury in December. A mistake at the third last at Haydock cost him momentum when third to Wakanda next time in first-time cheek-pieces.

Dawson City beat Dancing Shadow by six lengths at Exeter last month and has gone up 8lbs as a result. That was his first run since finishing seventh in the Welsh National, a race which is often a good guide to this event.

Back To The Thatch has missed a couple of tempting engagements due to fast ground. He fell in last year’s Eider Chase when going well but pulled up in the heavy ground here next time. His run behind Chef D’Oeuvre at Haydock in December suggests he could go well off a lightweight. He is 9lbs better off for nearly 3 lengths this weekend. Chef D’Oeuvre ran a mighty race when third to Robinsfirth at Haydock next time when racing from 3lbs out of the handicap. 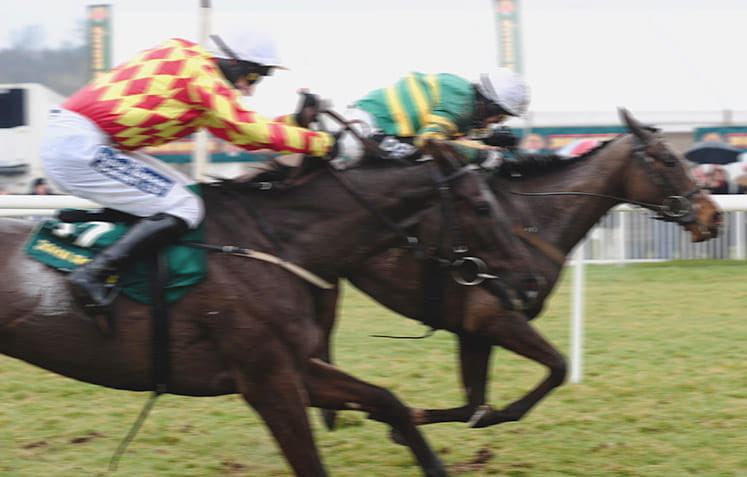 The Midlands Grand National is due off at 3.35 at Uttoxeter on Saturday 16th March and will be televised live on ITV4.