The highlight of Saturday’s card at Newbury is the £350,000 Group 1 Lockinge Stakes over a mile. This race often highlights the winner of the Queen Anne Stakes at Royal Ascot and has an impressive roll of honour. Recent Lockinge winners include Frankel (2012), Farhh (2013) and Ribchester (2017). Last year’s race was won by Aidan O’Brien’s Rhododendron who defeated Lightning Spear and Lancaster Bomber.

The early market leader is Le Brivido, formerly trained in France by Andre Fabre and now with O’Brien in Ireland. He was all out to beat Spirit Of Valor in the Jersey Stakes over seven furlongs at Royal Ascot in 2017 and has raced only twice since.

Le Brivido was sixth to Brando over six furlongs in April 2018 and finished third at Naas on his debut for O’Brien last month. He reared leaving the stalls that day and did well to finish within two lengths of Imaging at the line. That run suggests that the step up to a mile will suit and he will like the drying ground.

Karl Burke has chosen this race as the starting point for Laurens this season, the winner of the French Oaks, Matron Stakes and Sun Chariot Stakes last season. Her last run behind Roaring Lion at Ascot in soft ground can be forgiven after a couple of hard races. She was beaten in the 1000 Guineas on her seasonal reappearance last season and is likely to improve on whatever she does on Saturday.

Beat The Bank returned to his best at Sandown in the Bet365 Mile last month, holding Sharja Bridge by half a length. He ran poorly in this race last season but is much fitter this time. He tends to idle in front but usually pulls out more under pressure and the Andrew Balding stable are in terrific form at present.

Beat The Bank is closely matched with Lord Glitters on the form of last season’s Summer Mile at Ascot. There was only a neck between them that day and Lord Glitters is returning after a career-best effort in Dubai. He finished third to Almond Eye in the Group 1 Dubai Turf over nine furlongs. If Almond Eye were lining up on Saturday, she would be odds-on favourite so Lord Glitters must be respected.

Without Parole has lost his way since completing a four-timer in the St James’s Palace Stakes at Royal Ascot. He finished fifth in Dubai, holding every chance until fading inside the final furlong. There was plenty of encouragement in that performance.

Sharja Bridge stepped up from handicap company to win the Listed Doncaster Mile in March. He then chased home Beat The Bank at Sandown and meets that rival on identical terms. Mustashry was progressive last season for Sir Michael Stoute and finished third in a Group 3 at Newmarket on his return to action. He was not disgraced at the Breeders’ Cup in November and will win his share of races this season.

Godolphin have a great record in this race and are represented by Mythical Magic, an easy winner of the Zabeel Mile at Meydan. That may not have been the strongest Group 2 and he must improve again to feature here. Billesdon Brook has yet to reproduce her 1000 Guineas form of last year and Accidental Agent has not shown much since winning the Queen Anne last summer. 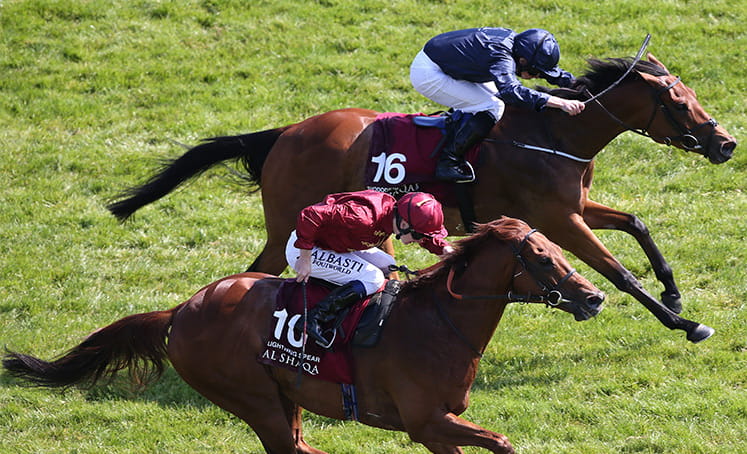 The Lockinge Stakes is due off at 3.40 at Newbury on Saturday 18th May and will be televised live on ITV.