The feature race at Newbury on Saturday is the £250,000 Ladbrokes Trophy, formerly known as the Hennessy Gold Cup. The three and a quarter mile handicap chase was sponsored by Hennessy for 60 years and has been won by nine Cheltenham Gold Cup winners.

Total Recall was one of seven entries for Willie Mullins but only Kemboy was left in on Thursday morning’s final declaration stage. He defeated Alpha Des Obeaux by three lengths in the Clonmel Oil Chase in November. That was his first run since winning a valuable handicap at Punchestown in April when rated 147. Kemboy is now a stone higher in the weights including his 4lbs penalty.

Ms Parfois represents the Anthony Honeyball stable, a seven-year-old mare by Mahler. She is yet to finish out of the frame in seven races over fences, notably when runner-up to Rathvinden in the four-mile National Hunt Chase at the Cheltenham Festival. She then chased home Terrefort at Aintree over an extended three miles. This will be her first outing since a wind operation in August.

American is also returning after a lengthy absence for Harry Fry. He last ran in the Gold Cup when finishing a remote ninth behind Native River. He was strongly fancied for this race last year but was eventually pulled up after making a mistake at the water jump. American is 6lbs higher in the weights this year.

Colin Tizzard suffered a reverse with the defeat of Gold Cup favourite Native River last weekend. He will be hoping for better luck with Elegant Escape, the winner of a Listed chase at Sandown last time. He beat Thomas Patrick by half a length, despite making several mistakes during the race. He finished third in the RSA Chase in March and filled the same spot at the Aintree Grand National meeting the following month.

Thomas Patrick won a valuable Aintree handicap when rated 139. He starts the new campaign off a 9lbs higher mark and is closely weighted with Elegant Escape on Newbury form. Alan King’s Dingo Dollar has been the subject of each-way support at long odds. The six-year-old will be having only his sixth start over fences and won here as a novice in December. He was beaten under a big weight at Ayr off a mark of 143 in April and will be sharper for his recent run over hurdles here behind Jersey Bean.

Black Corton survived an early blunder before chasing home Definitely Red in the Charlie Hall Chase at Wetherby. He seemed to have his limitations exposed when well beaten at Cheltenham and Aintree last season. The Young Master picked up a 4lbs penalty when beating Station Master by eight lengths at Cheltenham. He seems to have been around a long time but is still only nine years of age and clearly in good heart at present. His best form is on a sound surface so he would not want too much in Berkshire ahead of the weekend. 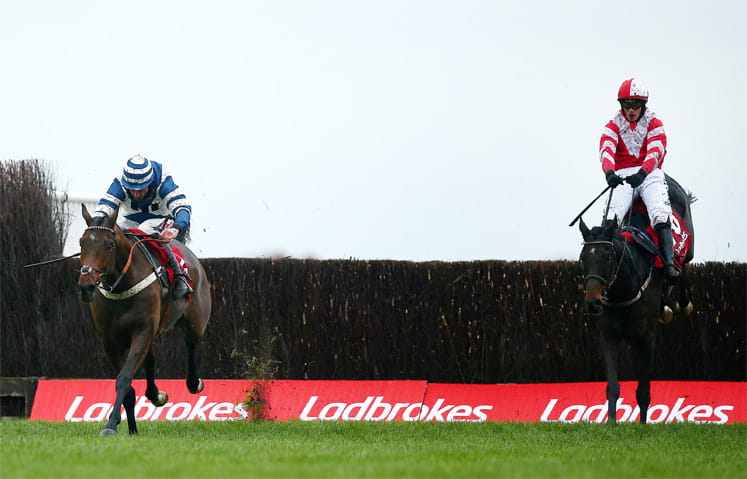 Sizing Tennessee gained his second win over fences at Fontwell in October but his jumping has let him down in the past. Tom Scudamore got a good rhythm out of him at the Sussex track and he has an each-way chance on his best form. Beware The Bear was pulled up in the Scottish National and is another one returning from wind surgery.

The Ladbrokes Trophy is due off at 3.00 on Saturday 1st December and will be televised live on ITV.