Brooks Koepka held off final day challenges to secure his third major in the last 14 months after a final day score of 66 was enough to win the 100th PGA Championship at Bellerive.

Koepka showed nerves of steel to maintain his lead over Tiger Woods and Adam Scott and his score of 16 under put him two shots ahead of second place Tiger Woods. Koepka carded scores of 69, 63, 66 and 66.

That score is a record in US PGA and after winning the US open twice already in this season, Koepka has become just the fifth man ever to win both titles in the same season.

Koepka is now ranked 2nd in the official World Golf Ranking and at just 28 years of age he looks sure to pick up more major titles in the future.

Still no title for Tiger

Koepka was pushed all the way by Tiger Woods, whose incredible final round of 64 was only enough for second place.

Woods stayed in contention until the very end. A front-nine score of 32 was rounded off with a birdie on the ninth, eliciting a roar from the crowd as Woods closed in on the lead.

Tiger again made birdies on the 12th and 13th and you would have been forgiven for thinking this would finally be the moment when Tiger ended his run of over ten years without a major.

But trouble was waiting. In truth, it was inevitable, due to the aggression with which Woods was playing. Haphazard off the tee, he had missed many fairways on the front-nine, and a bogey at the 14th was somewhat overdue.

The dream was dashed at the 17th. A wayward drive into the rough was followed by Woods hitting his club into the turf, knowing that Koepka was now all but out of reach. A birdie on the final hole meant that Woods finished second, a final score of 64 putting him one shot ahead of Adam Scott.

Scott himself went close too. A birdie on the 13th had tied the lead, but it was short lived, as Koepka’s birdie on the 15th was followed by a pinpoint drive on the next hole.

Despite only finishing as runner-up, the score was Woods’ lowest ever final round at a major, suggesting he is back and will continue challenging for a title. 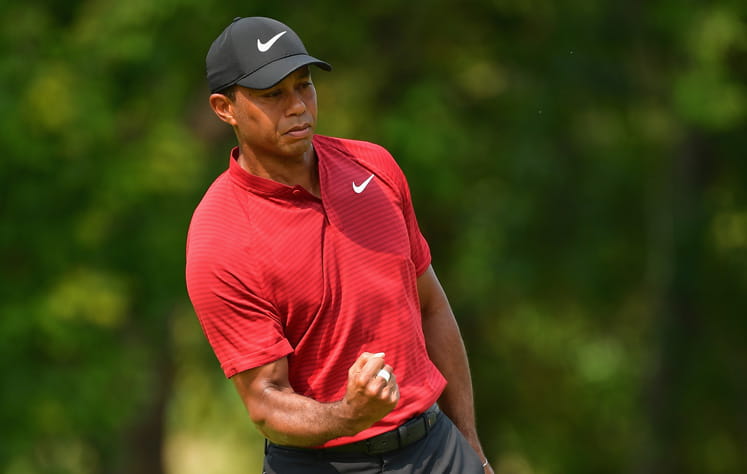 Jon Rahm was the highest placed European player. A final-round 68 put the Spaniard on 11 under, while Thomas Pieters from Belgium was one shot behind. Francesco Molinari finished with a final-round 67.

Those finishes will be music to the ears of the European team’s Ryder Cup captain Thomas Bjorn, who will be considering his four wildcard picks.

The best placed Brit was Tyrrell Hatton. His final-round of 64 was enough for a nine under finish, level with Cabrera Bello, while fellow Brits, Justin Rose and Matt Wallace, were two shots behind. Rory McIlroy’s two under finish meant he was never in contention as his run without a major continues.