The Curragh stages the first Irish Classic of the season with the 2000 Guineas due off at 3.35 on Saturday. The race often sees the winner of the Newmarket 2000 Guineas clash with the best colts from Ireland. Horses that have successfully completed the Guineas double include Don’t Forget Me (1987), Rodrigo De Triano (1992), Rock Of Gibraltar (2002), Gleneagles (2015) and Churchill (2017).

Aidan O’Brien has dominated this race in recent times with a record 11 victories, including seven of the last ten. He saddles the likely favourite on Saturday with impressive Newmarket winner Magna Grecia.

The colt was not O’Brien’s most fancied runner but the result was never in doubt, once Donnacha O’Brien kicked for home over a furlong out. He beat King Of Change with Skardu back in third place. Magna Grecia was drawn 17 and Skardu came from stall 3, racing at a perceived disadvantage in the far side group.

Magna Grecia’s two-year-old form makes impressive reading, having finished second to subsequent French Guineas winner Persian King in October. He then held Phoenix Of Spain by a head in the Futurity Trophy at Doncaster. The runner-up will be having his first run since when lining up this weekend. He improved with every race as a juvenile and is an exciting prospect from the Charles Hills stable.

Skardu earned his place in the 2000 Guineas by beating Momkin by a neck in the Craven Stakes. The son of Shamardal certainly improved on that effort in the Guineas and connections are optimistic that he can finish closer to Magna Grecia this time.

Too Darn Hot bids to redeem reputation at the Curragh

The race has received a huge boost with the news that John Gosden saddles former Guineas and Derby favourite Too Darn Hot. The top rated juvenile was not ready for the Guineas and made a belated reappearance in the Dante Stakes at York.

There was always a doubt about the son of Dubawi staying a mile and a half at Epsom and he took half a mile to settle at York. He did well to get within a length of Telecaster but his stamina was ebbing away in that ten furlong race. Frankie Dettori immediately reported that he should drop back to a mile and Gosden has elected to go straight to the Curragh. It had been expected that Too Darn Hot would next run in the St James’s Palace Stakes at Royal Ascot.

Decrypt won easily at Cork and takes a massive step up in class. He is yet to race beyond seven furlongs but the grey is very highly regarded and as short as 10-1 in the betting. Dermot Weld’s Shelir races in the colours of His Highness The Aga Khan. He is also raised in class after winning a Listed race at the Curragh.

Aidan O’Brien could also run Mohawk, runner-up to stable companion Circus Maximus in the Dee Stakes at Chester. The winner is on target for the Epsom Derby and a bold run from Mohawk would highlight his prospects. 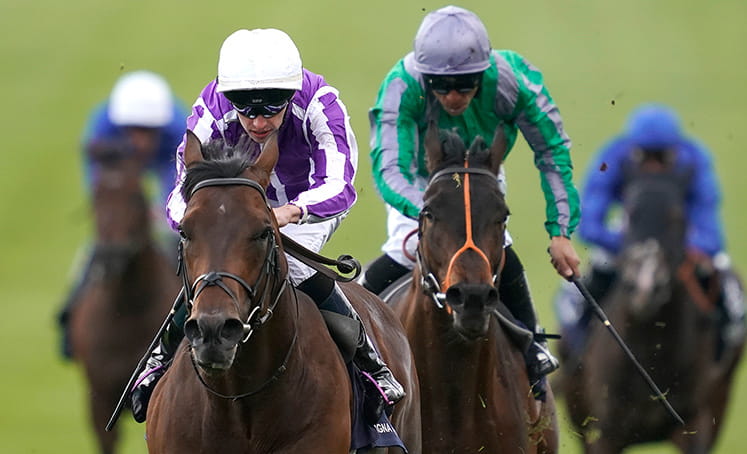 The Irish 2000 Guineas is due off at 3.35 at the Curragh on Saturday and will be televised live on ITV4.