The big betting race at Sandown Park on Saturday is the Betfred Mobile Heroes Handicap Hurdle over three miles at 3.00.

The race was formerly known as the Sandown Handicap Hurdle and is often a good guide to the big staying handicaps at the Cheltenham Festival in March. Notable past winners include Taberna Lord (1987), Trainglot (1993), Tullymurry Toff (1997) and Rubhahunish (2000). World Hurdle winner Baracouda set a weight-carrying record in 2004 when defying 11st 12lbs. No horse has successfully carried more than 10st 12lbs since.

Paul Nicholls has a good record in the race with three victories, a total matched by Philip Hobbs who won it last year with Saddlers Encore.

Hobbs and Nicholls dominate the early betting exchanges with Rolling Dylan and Mr Mix respectively. Rolling Dylan is a six-year-old gelding by Indian River who got off the mark over hurdles at Uttoxeter in November. He was well-backed to follow up at Chepstow in December but was beaten a quarter of a length by Shantou Bob. That looked a very competitive race and the handicapper has raised him 8lbs as a result.

Mr Mix jumped poorly when finishing a close fifth to Ballyoptic at Chepstow in October. It was to his credit that he was beaten only two lengths at the line and he duly obliged as favourite at Wincanton next time. He has gone up 6lbs but could improve as he tackles three miles for the first time.

Nicholls is also represented by Connetable, the winner of the Contenders Hurdle at the corresponding meeting a year ago. He disappointed in the Triumph Hurdle next time but returned to winning ways over fences at Wincanton in December. He reverted to hurdling at Newbury but was never a threat when only eighth behind Belami Des Pictons.

Kk Lexion won by ten lengths at Wincanton last time out for trainer Tom George. The handicapper has raised him a stone for that success but he won with such authority that he still has to be respected.

Dr Richard Newland’s Desert Sensation has been a model of consistency, finishing out of the frame only once in his last five starts. He battled on well to beat What A Diva at Exeter before defying a 4lbs penalty at Ascot in December. He then finished third to Shantou Bob at Chepstow but has five lengths to make up on runner-up Rolling Dylan.

Behind Time has got very few miles on the clock and races in the colours of leading owner JP McManus. He won well at Cheltenham in November despite showing signs of greenness and was heavily backed to follow up at Newbury next time. He could finish only fourth to Solomn Grundy, a horse which he had beaten on his previous start. 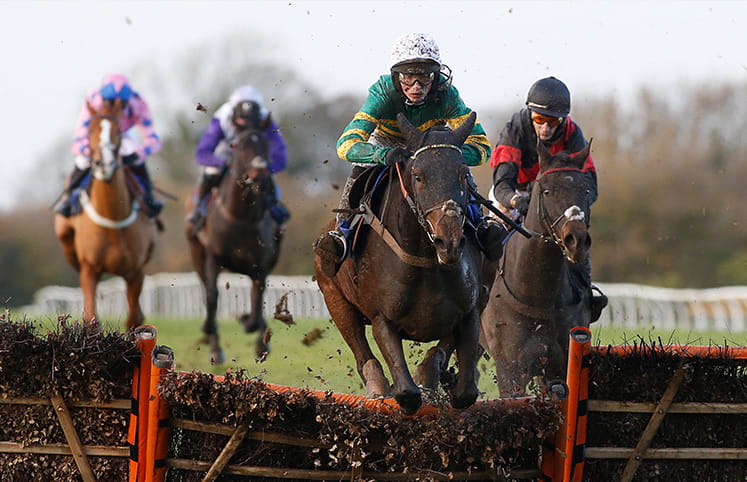 El Terremento up in trip at Sandown

El Terremento won at Stratford and Haydock before finishing third to Clyne off a 6lbs higher mark. That race was run in thick fog and only his rider knows how well he ran that day. He races off the same handicap mark again on Saturday and is another horse stepping up in trip.

Eight-year-old Ruacana was beaten only three-quarters of a length by Mr Mix at Wincanton and is set to renew rivalry on 4lbs better terms. He has won five of his thirty-three races, most recently at Musselburgh back in 2015.

Lord Of The Island took a heavy fall when favourite at Exeter on New Years’ Day. He was quietly fancied to make amends in the valuable Lanzarote Hurdle at Kempton and was not disgraced when third to Modus. Colin Tizzard is doubly represented with Billy No Name and Valhalla, although both look held on recent form.

The Heroes Handicap Hurdle is due off at 3.00 at Sandown Park on Saturday 4th February and will be shown live on ITV4.