The feature race at Haydock Park on Saturday is the Group 1 £260,000 32Red Sprint Cup over six furlongs.

Clive Cox will be hoping that the trend continues as he seeks his first Haydock Sprint Cup with favourite Harry Angel.

The three-year-old son of Dark Angel showed blistering speed here on his seasonal reappearance in the Group 2 Sandy Lane Stakes. He then went to Royal Ascot to contest the Group 1 Commonwealth Cup. The colt ran a mighty race but could not withstand the late challenge of Caravaggio.

Harry Angel gained his revenge on the Ballydoyle colt in the Group 1 July Cup at Newmarket. He was ridden with a little more restraint by Adam Kirby and found the best acceleration to beat Limato by a length and a quarter. The going was fast on that occasion but he is a previous winner on good to soft ground.

Kevin Ryan saddles Brando, a fast finishing third behind Harry Angel at Newmarket. The five-year-old started at long odds that day following a poor run at York in May. He started favourite for the Duke Of York Stakes but trailed in a remote last of 12 behind Tasleet in soft ground.

Ryan sent him to France for his latest start where he beat Aclaim to land the Group 1 Prix Maurice de Gheest. Caravaggio had been expected to bounce back from his July Cup defeat but could finish only sixth. Brando won the Ayr Gold Cup last year under a big weight on good to soft ground so should not be inconvenienced by conditions at Haydock.

Tasleet burst on to the sprinting scene with his impressive Duke Of York Stakes win. Trainer William Haggas had reservations about the colt in the soft ground but he cruised to the front before beating Magical Memory. He then ran on good to firm ground at Royal Ascot when chasing home The Tin Man in the Group 1 Diamond Jubilee Stakes. He would have an excellent chance on that form but blotted his copybook when fading to finish last in the July Cup. 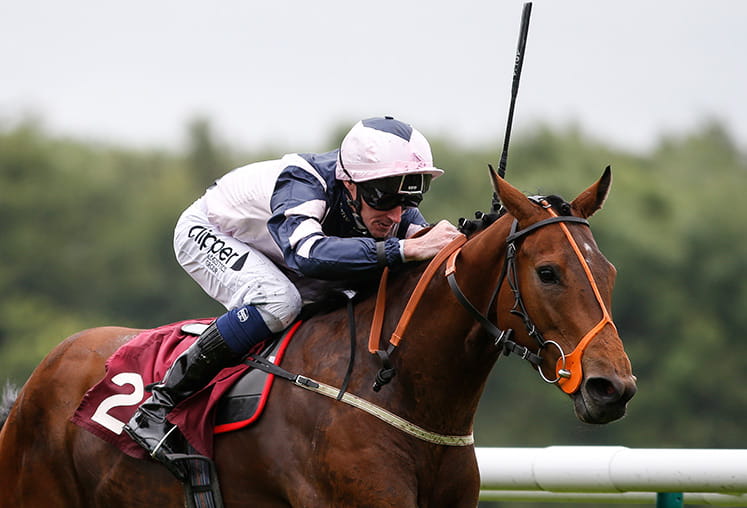 The Tin Man also ran disappointingly at Newmarket, finishing in eighth place. He has five lengths to make up on Harry Angel but may not have been suited by the muddling pace. The Tin Man ran well in this race last year when finishing second to Quiet Reflection in soft ground.

Blue Point races in the same colours as the favourite but is rated the Godolphin second string. Charlie Appleby’s colt beat Harry Angel at Ascot in May, although he was receiving 4lbs. Blue Point was not beaten far at the Royal meeting but the softer ground could be a concern. The Shamardal colt has never raced on going softer than good.

Magical Memory won narrowly here in July before winning the Group 3 Hackwood Stakes at Newbury. The grey son of Zebedee ran a solid race to finish fourth at Deauville behind Brando last time. Aidan O’Brien has elected to run Cougar Mountain and Spirit Of Valor from his five entries. Both look fully exposed and would need to post a career best to win here.

The Haydock Sprint Cup is due off at 2.25 on Saturday 9th September and will be televised live on ITV.