The feature race at Cheltenham on Sunday is the £100,000 Greatwood Handicap Hurdle over two miles.

The inaugural running of the race in 1987 was won by Celtic Shot who would go on to win the Champion Hurdle the following season. Rooster Booster also went on to take the hurdling crown in 2003, one year after winning the Greatwood. Other notable winners include Atours (1994), Grey Shot (1998), Detroit City (2006), Sizing Europe (2007) and Khyber Kim (2009). North Hill Harvey won the race last year for Harry and Dan Skelton. Philip Hobbs has won the race four times and is currently level with Martin Pipe for record number of victories.

Nicky Henderson has yet to win the Greatwood Hurdle but saddles the favourite on Sunday in Jenkins. The five-year-old was a top class National Hunt flat horse but is yet to live up to expectations over hurdles. Henderson recently expressed the view that Jenkins was very poorly handicapped on what he has achieved over hurdles. He did also say that the horse has been working with much more enthusiasm of late but was far from bullish about his prospects.

The Skelton team will try to win the race for a second consecutive season with Mohaayed. He ran a fine race in the County Hurdle at the Festival meeting when finishing a close seventh to Arctic Fire. Mohaayed showed that his run was no fluke when finishing third to Chesterfield in the Scottish Champion Hurdle. He has not raced since bolting up at Market Rasen in May but has attracted solid each-way support this week. Dan Skelton has made no secret of the fact that he has Mohaayed fully tuned up for this race.

Chesterfield has been kept under wraps since winning at Ayr. Seamus Mullins now trains the gelding who was once owned by Godolphin. He has gone up a further 5lbs in the ratings but Daniel Sansom claims 7lbs off his back.

Harry Fry is represented by recent Chepstow winner Misterton, a six-year-old gelding by Sagamix. He was having his first run since winning a novice handicap hurdle at Wincanton in March. The form received a boost when fourth-placed Elgin won the valuable William Hill Hurdle at Ascot. Misterton is up 6lbs on Sunday.

Elgin could seek a second major prize for Alan King. The five-year-old battled on well to hold Limited Reserve by a length and a quarter. He is up 5lbs but should still be competitive along with last weekend’s Elite Hurdle winner London Prize. Ian Williams has his stable in peak form at present and may be tempted to run him under a penalty. The six-year-old had previously finished second in the Cesarewitch Handicap at Newmarket and is very progressive. 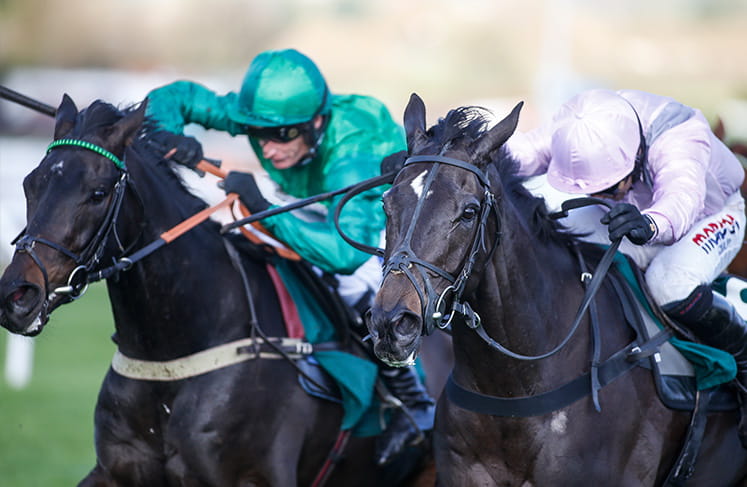 Money for Tigris River at Cheltenham

Joseph O’Brien pulled off a remarkable victory when denying his father in the Melbourne Cup last week. He seems equally adept at training National Hunt horses and there has been good support for Tigris River this week. The six-year-old won the Galway Hurdle in August but is now 10lbs higher in the weights.

Flying Tiger was a shock 33-1 winner of the Fred Winter Juvenile Hurdle in March. He was nearly five lengths behind London Prize last weekend but is entitled to improve. Others with claims in a wide open race include top weight The New One and Brian Ellison’s Nietzsche.

The Greatwood Hurdle is due off at 3.00 on Sunday 19th November and will be televised live on ITV4.