Grand National Special – Get the Best Bonus Offers of 2017!

The £1 million Grand National is the most valuable National Hunt race in Europe and the most popular betting race in the UK. It is watched live in over 140 countries by an estimated 600 million people and attracts a betting turnover of £150 million in the UK alone.

The gruelling race over an extended four miles and forty fences is the race that every trainer and jockey wants to win. The history of the race is littered with heroes, both human and equine. From three-time winner, Red Rum, to the remarkable story of Aldaniti and Bob Champion, the Grand National has often produced the stuff of legends.

Last year, Rule the World produced a 33-1 shock for veteran Irish trainer Mouse Morris. Could there be another outsider winning this year? We take an in-depth look at this year’s field and highlight the best bonuses currently on offer at the bookmakers.

Whether you fancy the occasional flutter on the Grand National or the Derby, or you’re a keen racing enthusiast, it always pays to check out the best bonus offers. If you don’t yet have an account with an online bookmaker, we’ve listed a couple of the best new customer deals so that you can take full advantage. Existing customers should also keep a look out for enhanced place terms, refunds on fallers or special prices on offer for the Grand National on Saturday.

William Hill are offering new customers 3 x £10 free bets after placing an initial £10 bet. The odds must be 1-2 or better and you must stake £10 to win or £10 each-way to qualify for the free bets.

Betway are offering a 100% Deposit Bonus on stakes up to £50 with money back as a free bet if your horse loses at Aintree. To qualify for the £50 free bet, you must join via the Betway website and place a bet at odds of 1.75 or better.

888Sport are offering new customers treble the odds on their first bet. A £10 minimum deposit is required with a maximum first bet of the same amount. The extra winnings will be paid as free bets, which expire 7 days after credit.

The early favourite is David Pipe’s Vieux Lion Rouge, seventh in last year’s race when he faded from the second last fence. He returned to Aintree to win the Becher Chase in a thrilling finish from Highland Lodge, The Last Samurai, Ucello Conti and One For Arthur. The five horses were covered by three lengths and are set to renew the rivalry over a mile further on Saturday.

Vieux Lion Rouge went on to win the Grand National Trial at Haydock by an impressive three-and-a-quarter lengths from Blaklion. The runner-up is 3lbs better off at Aintree and by-passed Cheltenham to run here. He is trained by Nigel Twiston-Davies and won the Grade 1 RSA Chase at last year’s Cheltenham Festival.

Eleven-year-old Highland Lodge may be in the autumn of his racing career, but that did not stop Neptune Collonges (2012), Aurora’s Encore (2013) or Pineau De Re (2014). He was only caught in the final stride in the Becher Chase after being three lengths clear at the elbow.

One For Arthur Fancied for Scottish Victory

The last Scottish-trained winner was Rubstic in 1979, but there are high hopes behind One For Arthur this year. He is trained by Lucinda Russell at Kinross and followed up his Becher run with a resounding success in the Warwick Classic in January. He has never fallen over fences and looks the ideal type to run in the Grand National.

Gordon Elliott edged out Willie Mullins to become the leading trainer at Cheltenham last month. He saddles Ucello Conti who has a similar profile to Vieux Lion Rouge. He was in contention last year until mistakes at the 19th and 26th fences, eventually fading to finish sixth. He ran a pleasing trial in the Becher Chase and was given a pipe-opener at Naas last month.

Mullins relies on Pleasant Company, a winner at Fairyhouse in February. Ruby Walsh was confirmed as his rider last week, prompting bookmakers to cut his odds to around 16-1. He has over ten lengths to make up on Ucello Conti from the Thyestes Chase at Gowran Park in January. 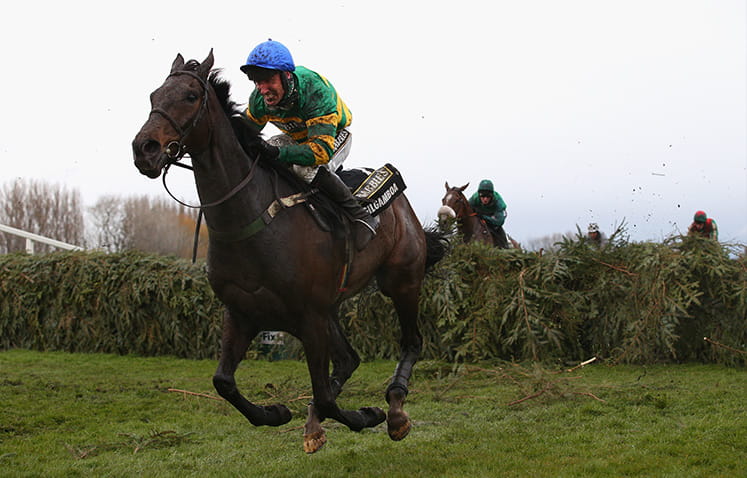 The Last Samuri was gallant in defeat last year, finding only Rule The World too strong in the closing stages. Kim Bailey has trained him for the National all season but he has to carry top weight and races off a 12lbs higher mark. He was beaten BY fourteen lengths by Definitly Red at Doncaster last time out and meets that rival on identical terms on Saturday.

Brian Ellison trains Definitly Red, an eight-year-old gelding with four wins from nine starts over fences. His win in the Grimthorpe Chase was his first race beyond three miles but he will have a mile further to travel at Aintree.

Saint Are was runner-up to Many Clouds in the 2015 Grand National and has crept into the race almost unnoticed this season. He did not jump with his usual fluency last year and was pulled up by Paddy Brennan. Davy Russell takes over in the saddle this weekend and the drying ground will be to his liking.

Cause Of Causes Bids to Follow up Cheltenham Victory

Jonjo O’Neill has elected to run More Of That here in preference to Minello Rocco. The two JP McManus-owned geldings finished sixth and second respectively in the Cheltenham Gold Cup. More Of That is a previous Grade 1 winner over hurdles but has struggled to repeat that level of form over fences.

JP McManus also has Cause Of Causes in the race, another horse in the care of Gordon Elliott. He was always outpaced when he came eighth in the Grand National in 2015 but looked as good as ever when winning at Cheltenham. Paul Nicholls is optimistic of a good run from Gold Cup fifth Saphir Du Rheu. Like More Of That, he was top class over hurdles but has not always looked a natural jumper. His Gold Cup run was a career best effort.

Amateur rider Sam Waley-Cohen has a good record in the race and he partners The Young Master for Neil Mulholland. He was a leading novice chaser and won last season’s Bet365 Chase at Sandown. He was beaten when falling two out in the Becher Chase but hinted at a return to form when he came sixth at the Cheltenham Festival.

The 2017 Grand National is due off at 5.15pm on Saturday 8th April and will be televised live on ITV4.