A strong supporting card on Hungerford Stakes day at Newbury on Saturday includes the £60,000 Group 3 Geoffrey Freer Stakes at 2.25. The race is for three-year-olds and upwards over a mile and five furlongs.

The Geoffrey Freer Stakes formerly held Group 2 status before being relegated to Group 3 in 2006. The distance of the race makes it a suitable trial for St Leger hopefuls as well as potential Melbourne Cup runners. Moon Madness (1987), Silver Patriarch (1999) and Sixties Icon (2008) all went on to win the season’s final Classic at Doncaster. Marcus Tregoning saddled Mubtaker to win the race for three successive seasons between 2002 and 2004. Other notable winners include Ardross (1981 and 1982), Shernazar (1985), Drum Taps (1981) and subsequent Irish St Leger winner Sans Frontieres (2010).

There is only one St Leger entry in the field this year, the Richard Hannon trained Raymond Tusk. He is by High Chaparral out of a Danehill mare and won on his debut at Newbury in April. He then finished second to Loxley at Newmarket before finishing down the field in the Group 1 Eclipse Stakes at Sandown. That was a very ambitious entry and he was dropped in class for a Listed race at Hamilton next time which he won comfortably.

Ryan Moore rides Dal Harraild, a five-year-old gelding trained by William Haggas. He was beaten a neck by Dylan Mouth at York before finishing fourth to Stradivarius in the Goodwood Cup. He raced quite keenly in that small field and was not disgraced to be beaten just over eight lengths.

Godolphin are represented by Hamada, trained by Charlie Appleby. The four-year-old son of Cape Cross has won his last four races. He was particularly impressive when beating Shraaoh by seven lengths on his latest start at Newmarket in July. He was racing off an official rating of 96 that day and has been put up 11lbs. That certainly entitles him to take his chance in this grade. Stable companion Walton Street is by Cape Cross out of a mare by Encosta De Lago. He caught the eye when finishing third in a valuable handicap at Royal Ascot in June. He has missed a couple of tempting engagements since and is yet to race beyond a mile and a half.

Perfect Clarity steps up in trip at Newbury

Another horse stepping up in distance on Saturday is the Clive Cox trained Perfect Clarity. She won the Lingfield Oaks Trial in May and was fancied to go close in the fillies’ Classic at Epsom. She faded tamely in the closing stages and failed to improve on that effort when fifth at Royal Ascot.

David Simcock runs Algometer, a five-year-grey son of Archipenko. He has won only three of his thirteen races, most recently taking the Arc Trial here in September 2016. He ran his best race for some time at Longchamp last month when second to Marmelo in Group 2 Prix Maurice de Nieuil.

On To Victory finished only seventh in a Goodwood handicap won by Sir Chauvelin last time. His best form has been on soft ground so any rain this week will improve his chances. Jet Streaming completes the line-up but she looks out of her depth. 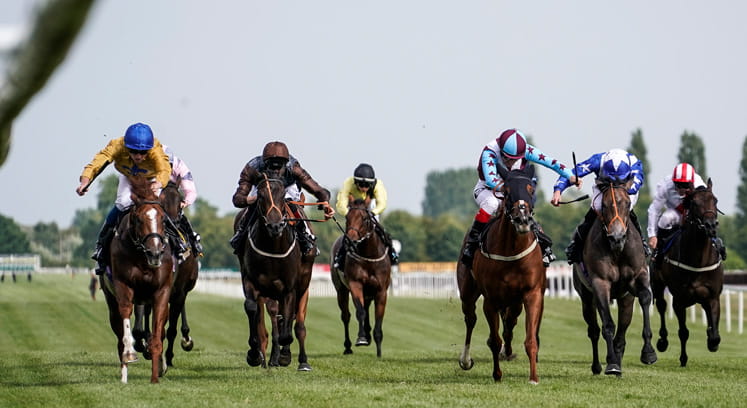 The Geoffrey Freer Stakes is due off at 2.25 at Newbury on Saturday 18th August and will be televised live on ITV4.