The feature race at Newcastle on Saturday is the £120,000 Grade 1 Fighting Fifth Hurdle over two miles.

Alan King’s Sceau Royal has worked his way into the Champion Hurdle picture with fluent victories at Cheltenham and Wincanton this season. He was particularly impressive when storming clear to beat Leoncavallo by eleven lengths in October on good ground. He won three successive hurdles last season before his form tailed off at Cheltenham and Aintree.

He was never a factor in the Triumph Hurdle before finishing over fifty lengths adrift of Apple’s Jade in very soft ground at Aintree. The going is currently riding soft at Newcastle but Sceau Royal should be suited by the small field. All three of his disappointing runs have been in fields of nine runners or more.

Irving won the Fighting Fifth in 2014 for Paul Nicholls but could manage only sixth of seven behind Identity Thief last year. He has won seven of his fourteen races over hurdles but has not been seen since finishing tailed off last behind Rayvin Black at Wincanton in February.

Apple’s Jade was as short as 8-1 for the Champion Hurdle prior to her recent defeat at Down Royal. She started odds-on favourite in a field of four runners in Ireland but was beaten a length and a half by Rashaan after making the running. Trainer Gordon Elliott was disappointed with that performance and suggested that a longer trip may be in order for the four-year-old filly. She had looked a leading Champion Hurdle contender when spread-eagling her field at Aintree to win by 41 lengths in April.

Petit Mouchoir races in the same colours as Apple’s Jade, those of Gigginstown House Stud. He is a grey son of Al Namix and finished only a length and three-quarters behind the filly at Down Royal last time. He was thought good enough to contest the Supreme Novices’ Hurdle at the Cheltenham Festival in March where he finished eighth behind Altior.

He then belied his odds of 40-1 to finish second to Buveur D’Air in softer ground at Aintree. He ended his season with a good run behind Don’t Touch It in a Grade 1 at Punchestown in April and should be fitter for his recent outing. 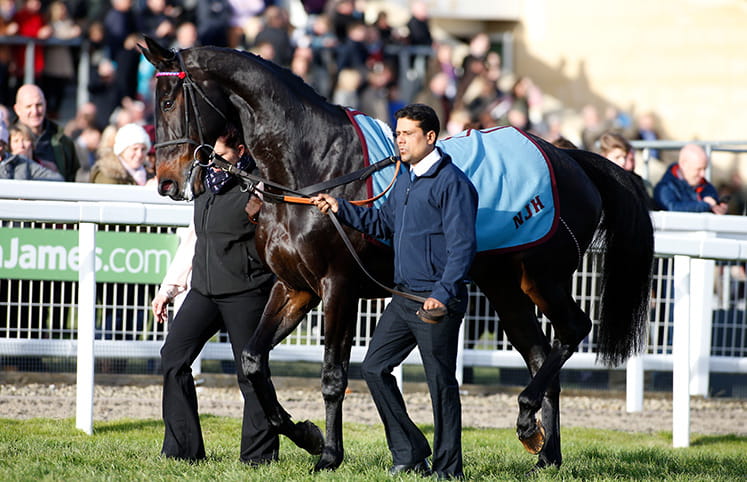 Hidden Cyclone is now eleven years old and would become the oldest ever winner of the race should he prove successful on Saturday. Sea Pigeon was ten years old when winning for the second time in 1980. Hidden Cyclone is better known as a chaser and was second in the Ryanair Chase behind Dynaste in 2014.

He reverted to hurdles in May and has gone on to win at Listowel and Punchestown as well as finishing runner-up in the Galway Hurdle. He beat Rashaan by two and a quarter lengths at Punchestown in October so that horse’s subsequent victory over Apple’s Jade suggests that he has a chance here.

The field is completed by Mirsaale, trained in Scotland by Keith Dalgleish. He has won two of his four races over hurdles and was second to the smart Moon Racer at Cheltenham earlier this month. This is a big step up in class for the son of Sir Percy and it will be a surprise if he is good enough to trouble the market leaders.

The Fighting Fifth Hurdle is due off at 2.55 at Newcastle on Saturday and will be televised live on Channel 4.