The Derby Stakes takes place on Saturday 3rd June with a record £1.625 million in prize money on offer. The Derby remains the most prestigious Classic race in Britain and the inspiration for world famous events like the Kentucky Derby and Irish Derby.

Aidan O’Brien won the Derby for three successive seasons between 2012 and 2014 before Golden Horn ended his domination in 2015. Last year’s race was won by Harzand for His Highness The Aga Khan, defeating O’Brien’s US Army Ranger and Idaho. We take an in-depth look at this year’s field and highlight the best bonuses currently on offer with the bookmakers.

Even if you only have the occasional flutter on the Derby or Royal Ascot, it always pays to check-out the best bonus offers. If you don’t yet have an account with an online bookmaker, we’ve listed a couple of the best new customer deals so that you can take full advantage. Existing customers should also keep a look-out for enhanced place terms or special prices on offer for this year’s Epsom Derby. Most bookmakers offered a non-runner/no bet guarantee on the 2017 Derby for bets placed from Monday 29th May onwards.

William Hill are offering new customers 3 x £10 free bets after placing their initial £10 bet. The odds must be 1-2 or better and you must stake £10 to win or £10 each-way to qualify for the free bets. William Hill will also pay a 15% free bet bonus if your horse wins by 2 lengths or more on selected UK and Irish flat races! Full details are on their website.

Betway are offering 100% Deposit Bonus on stakes up to £50 with money back as a free bet if your horse loses at Epsom. To qualify for the £50 free bet, you must join via the Betway website and place a bet at odds of 1.75 or better.

New customers at Coral can get a special price of 20-1 on Rhododendron in Friday’s Oaks at Epsom (current price 6-4). You have to make a minimum £5 deposit and bet a maximum £1 on Rhododendron with any winnings paid in free bets. Should the favourite be beaten, you will still receive £5 in free bets.

The betting for the 2017 Derby is wide open following the decision of Aidan O’Brien to run Churchill in last weekend’s Irish 2000 Guineas. Doubts over the colt’s stamina prompted the decision to stay at a mile for the time-being but Ballydoyle will be as strongly represented as ever.

Cliffs Of Moher is the shortest priced O’Brien runner, the winner of the Dee Stakes at Chester. He put up a workmanlike performance to beat Bay Of Poets and Max Zorin. The runner-up had finished a similar distance behind Cracksman and Permian in the Blue Riband Trial at Epsom.

Venice Beach led home a 1,2,3 for Ballydoyle in the Chester Vase when defeating Wings Of Eagles and The Anvil. Ryan Moore did not have to be too hard on the colt who has at least shown that he stays a mile and a half. Runner-up Wings Of Eagles was slowly away and made rapid headway before the home turn. He took a while to get organised in the home straight before staying on again at the finish. He is out of 2011 Derby winner Pour Moi and is another who will be staying on at the finish.

Bookmakers are divided on the merits of Capri after two defeats this season with prices varying between 10-1 and 20-1. The grey won the Beresford Stakes at the Curragh in September before finishing third in France. He has been beaten twice at Leopardstown this spring, most recently finishing a neck behind Douglas Macarthur and Yucatan. Douglas Macarthur battled on gamely at Leopardstown and will be stepping up in trip at Epsom. He is by Galileo out of Alluring Park who sired 2012 Oaks winner Was for the same stable.

John Gosden has been quite bullish about the prospects of Cracksman, the mount of Frankie Dettori. He won over ten furlongs at Epsom on only his second start when edging out Parmian by a short-head. Cracksman is a son of Frankel and missed out on the Dante due the rain-softened ground. He had a gallop at the recent “Breakfast with the Stars” at Epsom alongside Pealer but we didn’t really learn much from that.

Permian boosted the form when winning the Dante Stakes at York in a driving finish from Benbatl. Permian is owned by Sheikh Hamdan bin Mohammed Al Maktoum and connections were prepared to stump up £85,000 to supplement him for the Derby. The race will be his fifth of the season having been beaten off a handicap mark of 100 in April.

Nizar Anwar has also dipped into his pockets to supplement last week’s easy Goodwood winner Khalidi. The colt looks held on earlier form by Permian but his win at the Sussex track in course record time has persuaded connections to run at Epsom.

Benbatl was third to Eminent in the Craven Stakes over a mile prior to his Dante effort. Eminent provides Frankel with a second chance of landing the Derby with his first crop. He is trained by Martyn Meade and finished sixth behind Churchill in the 2000 Guineas. His stamina has to be taken on trust, although his dam is out of a mare who was placed in the Oaks.

Best Solution is one of three likely starters for Saeed bin Suroor in the blue colours of Godolphin. He put up arguably the most impressive Derby Trial performance at Lingfield. Best Solution struggled in Dubai during the winter but bounced back to beat Glencadam Glory by three and a quarter lengths. It remains to be seen how strong a race that was but Best Solution was a decisive winner. 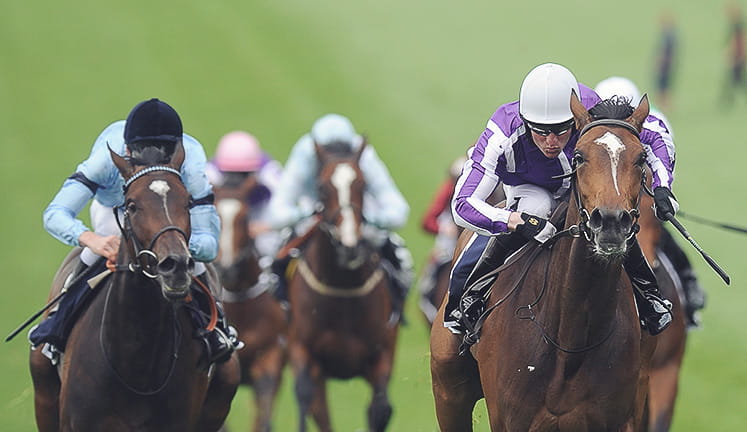 The dark horse of the race is Dubai Thunder, a ten lengths winner on his racecourse debut at Newbury. That was over ten furlongs on soft ground when powering clear to beat Hawridge Flyer. That form has yet to be tested but three-time Derby winning jockey Kieren Fallen has been impressed by the son of Dubawi on the home gallops.

Joseph O’Brien’s Rekindling beat Douglas Macarthur at Leopardstown in April before finishing fourth in the Dante. There didn’t appear to be any excuses for him at York and he may be hard-pressed to reverse the form with Permian and Benbatl.