The Epsom Derby takes place this Saturday with Saxon Warrior odds-on favourite to win the second leg of the Triple Crown. The last horse to win the 2,000 Guineas, Derby and St Leger was Nijinsky for Vincent O’Brien and Lester Piggott back in 1970. It is rarely attempted these days, although Aidan O’Brien went close with Camelot in 2012. He was thwarted by Godolphin’s Encke in the St Leger at Doncaster.

O’Brien has won the Derby on six previous occasions including Galileo (2001), Australia (2014) and Wings of Eagles last year. If he is successful on Saturday he will join Robert Robson, John Porter and Fred Darling as the leading trainers of all time in the Derby. Another familiar figure at Epsom is His Highness The Aga Khan, owner of five previous winners. Shergar’s record winning margin of ten lengths in 1981 still stands. He is represented this year by Hazapour, the mount of Frankie Dettori. Other notable Derby winners include Sea Bird (1965), Mill Reef (1972), Nashwan (1989) and Lammtarra (1995).

Dee Ex Bee Odds 33-1 Rating 8 A close second to Young Rascal at Chester but the winner appeared to have plenty in hand. Connections felt that he wasn’t suited by the track that day and are hopeful of a big run.

A promising run behind Hazapour at Leopardstown but any each-way value seems to have gone at his current odds.

A workmanlike winner of the Leopardstown Derby Trial when starting at long odds. Described as a lazy sort at home, Frankie Dettori will be trying to get the best out of him.

Reported to have lost a shoe when second in the Lingfield Derby Trial. Still needs to find plenty of improvement to reach the frame here.

Stole a march on his rivals at Lingfield under an inspired ride from Richard Kingscote and likely to be up with the pace at Epsom.

Nine lengths winner of the Craven Stakes and a good third in the 2000 Guineas. Given little chance of staying by pedigree experts and the recent rain is also a concern.

Stepped up on 2000 Guineas form to win the Dante Stakes impressively. Can get a bit excitable in the preliminaries and will need to conserve energy to last a mile and a half, particularly if the going is soft.

Very difficult to find a flaw in the 2000 Guineas winner who is expected to improve at this distance. Ryan Moore will be seeking his third Derby winner following Workforce (2010) and Ruler of the World (2013).

John Gosden originally planned to send this one to France but has reconsidered due to the rain-softened ground. Sandown form was subsequently let down at Chester.

Little between this one and stable companion Delano Roosevelt on form and O’Brien retains faith in the son of Galileo.

Didn’t get the run of the race in the Chester Vase but still came out on top. Looks a genuine middle-distance performer and definite each-way claims.

Well beaten behind Roaring Lion in the Dante and difficult to fancy on form. 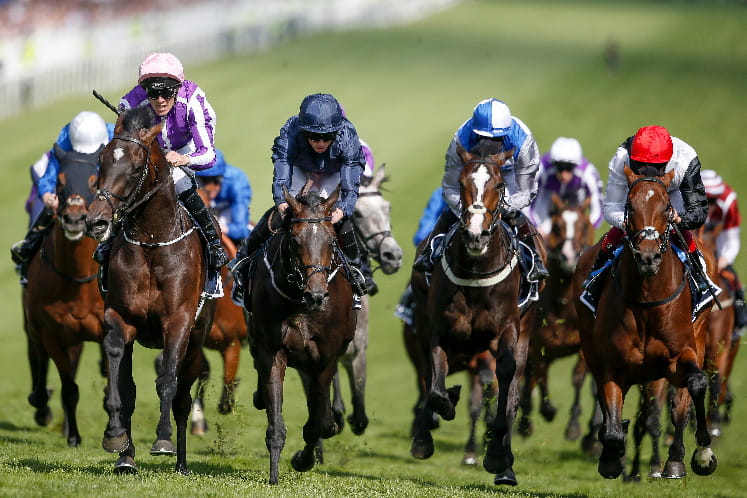 It is very difficult to oppose the favourite SAXON WARRIOR who can follow up his impressive 2,000 Guineas victory. Young Rascal won nicely at Chester and is preferred to Roaring Lion and Masar, both of which have stamina concerns in yielding ground. The Leopardstown Derby Trial won by Hazapour is hard to assess and Dee Ex Bee looks the best value of the outsiders.

*Sport Nation are offering new customers odds of 33-1 about Saxon Warrior! Odds apply to a maximum £1 stake only using the promotional code SNODDS.

The Epsom Derby is due off at 4.30pm on Saturday 2nd June and will be televised live on ITV.