A superb performance in Dublin gave the England team victory against Ireland in the Six Nations. There were also victories for Scotland and Wales in the first round of matches.

A reborn and rejuvenated England team defeated holder Ireland in the first round of games in the Six Nations tournament. The 20-32 score line and crucially the bonus point, extracted sweet revenge for the English who were beaten on home soil by the Irish in last year’s competition. That humiliating 15-24 defeat gave Ireland the Six Nations title as well as securing a third Grand Slam for the Irish as well as the Triple Crown.

England from the start looked the hungrier of the two teams and played with an intensity and physicality which the Irish struggled to deal with. Therefore it was no surprise when England took the lead, Jonny May scoring a great try with just two minutes on the clock, becoming the first English player to score a try in Dublin since 2011. At half-time the score was 10-17 in England’s favour.

A Jonathan Sexton penalty for the Irish looked to have put them back into contention but England hit back, Harry Slade chasing down May’s kick to score. England’s lead was further increased when Farrell scored a penalty and the win was all but secured when Slade picked off Sexton which enabled him to score his second try of the game. John Cooney scored for the Irish at the death but it was a mere consolation and England claimed a historic 20-32 win.

Ireland head coach Joe Schmidt admitted that England were the better side. Reflecting after the game, the New Zealand-born Schmidt was gracious in defeat and admitted England “beat us up”. Since taking over the role of head coach with Ireland, Schmidt has guided them to three Six Nations Championships and has seen them rise in the ranking to second place behind New Zealand. Schmidt said England outmuscled and outfought Ireland and his team struggled to handle the physicality of the English team. He praised England’s ability to slow down the ball and gave credit to the England head coach Eddie Jones for firing his players up to such an intensity.

The 53-year old said his team need to respond in this weekend’s clash with Scotland at Murrayfield, a feat that he believes will be a huge challenge. When asked if alarm bells are ringing due to the comprehensive manner of the defeat by England, Schmidt said any defeat by any margin whether heavy or slender is a cause for concern but pointed out it was Ireland’s first home defeat in the Six Nations for six years.

Despite Schmidt voicing concerns, a slow start by Ireland is nothing new. In the first game of the Six Nations last year the Irish were incredibly fortunate to take anything from their clash with France. As the game went into overtime the French had a narrow lead and looked to be holding on for the victory with a 13-12 score line. However, right at the death Johnny Sexton snatched victory from the jaws of defeat by hitting a stunning drop goal to win the game.

Ireland will need to display the same level of grit if they hope to get their Six Nations campaign back on track in their next fixture, a tough clash against the ever improving Scots at Murrayfield. Over 65,000 tartan fans will provide a hostile atmosphere for the Irish. 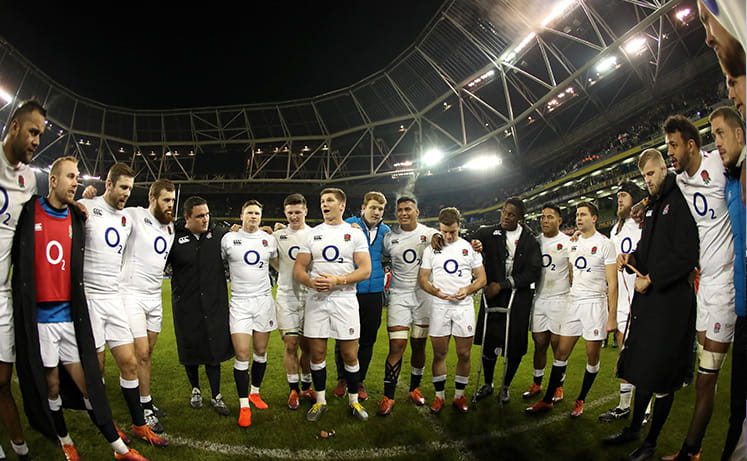 Scotland will be keen to build on their first match success, a comfortable 33-20 win over Italy. Blair Kinghorn doing the damage with a brilliant hat-trick as Scotland extended their Championship winning streak at Murrayfield to seven games.

Scotland’s head coach Gregor Townsend praised his team’s frantic start to the game which unnerved the Italians. Townsend will however be concerned that despite his team’s dominance, Italy were allowed back into the game towards the end. The three tries they scored late on gave the score line a more credible look for the Italians but also exposed a frailness in Scotland. A hungry Irish team looking to bounce back from defeat are likely to pose a much bigger challenge for the Scotland team.

Wales also got their Six Nations campaign off to a winning start with a narrow 19-24 victory over France. A match that will be long remembered by fans due to the Welsh producing a historic fightback.

France, due to tries from Louis Picamoles and Yoann Huget, stormed into a 16-0 lead by halftime and any hopes of a Welsh win appeared well and truly dashed. However, a mistake by France’s Huget gave the visitors a way back into the match, the Toulouse wingback fumbling a ball whilst under no pressure to gift George North a try. Another mistake by France later in the game gave North his second. The Ospreys’ player seizing on a ridiculous pass by Sebastien Vahaamahina that allowed North to sprint clear. It was tight at the end but Warren Gatland’s Wales hung on to claim the win, a victory that is Wales’ tenth Test win in a row.