Could it really be coming home? Pinch yourself; we are just two games away from claiming the biggest prize in international football. The most un-fancied England team ever have bossed their way into the semi-final with a commanding 2-0 win over Sweden and the whole footballing nation is going crazy.

England played well from the start; Harry Maguire scored a strong header from a corner kick to give England the advantage in the first half. Dele Alli then scored the second thirteen minutes after the break to ensure Gareth Southgate’s England marched on into the semi-finals of the World Cup for the first time in 28 years.

This is a feat that even the golden generation of England players failed to achieve. The most admirable quality of the English team is the team spirit and the togetherness they have shown throughout the qualifications and now in the World Cup.

The English press in particular – who have always been critics of the national team – have been mostly behind the team, generating a positive vibe and good energy around.

Another possible reason for England’s success is the lack of high expectations for the team coming into the tournament, with every step of progress seeming like a great achievement.

They were regarded as the seventh favourites to win, but even the harshest the critic would struggle to argue against the fact that this team has already done us proud. They are already heroes; they are two games away from being legends.

The luck of the draw

The aspect of luck – or should I say fate – may well have aided our progression. Who would have ever predicted we would be facing Colombia in the round of sixteen and then Sweden in the quarter-finals? All this comes after we lost 1-0 to Belgium and came second in our group. The usual scenario is that the group winners face the easiest opponents in the knockout stage but hey, whether luck or amazing planning, we’ll take it.

Well, it wasn’t the case this time around as Belgium, the group winners faced Brazil and now have an uphill task against France in the semi’s while England face Croatia.

England has over the years had issues with goalkeepers! The golden generation, in particular, didn’t have a golden keeper. But my! Oh! My! Did you see Jordan Pickford’s performance against Sweden with the three magnificent one-handed saves?

Brilliant, world-class, fabulous and any other superlatives you can think of, I’m struggling to think of the word to describe him better. Pickford was belittled (pun intended) and subjected to criticism early in the tournament but my man crush on the Everton player is developing so much that I daren’t mention his name and the word ‘semi’ in the same sentence.

Some great team performances from the England squad have taken us to this stage, not egos.

Even when the captain Harry Kane was having a quiet day, the astute among you will have noticed the brilliance from captain fantastic, he played a selfless game.

His decoy runs created spaces for the youngsters to exploit. So while Kane didn’t increase his tally, the rest of the team took it upon themselves to step up, with Alli scoring his first World Cup goal and Maguire scoring his first ever goal for England. And what a time he picked to score.

Another player who has probably slipped under the mainstream radar is Manchester United’s Jesse Lingard. His World Cup passing accuracy stats are amazing: vs Tunisia – 96.4%, vs Panama- 93.9%, vs Colombia- 90.9%, and vs Sweden- 93.5%. Yet most of us only remember the important goals he scores, another example of one of the ‘kids’ coming of age.

Even (Sir) Gareth Southgate was quick to acknowledge how even ‘bit-part’ players such as Danny Welbeck are playing their part behind the scenes.

A famous pundit once said that you don’t win anything with kids and while we haven’t (just yet), the optimism and enjoyment around this team far surpasses anything us England fans have experienced for a long time. Thank-you (Sir) Gareth, you have made my summer one of hopes and dreams and whatever happens, I salute you (Sir).

And whilst I can wax lyrical all day about the Three Lions, it’s worth casting an eye over the action in the other side of the draw.

World Cup 2018 – A graveyard of champions

Germany out, Spain out, Argentina out, if that’s not enough, favourites Brazil are also out.

In a classic battle dubbed ‘the final before the final’ between Brazil and Belgium, there was a great display of good football from both teams and a big upset and heartbreak to Brazilian fans. Brazil were impressive for the entire tournament until they met their untimely exit in the hands of the red devils.

Fernandinho, who replaced Casemiro, was poor. The 33-year-old scored an own goal and couldn’t stop Romelu Lukaku who started the counter attack that led to Kevin De-Bruyne’s goal. It was all down to the managers’ tactics and Roberto Martinez was the genius for the night. Brazil manager Tite made rushed substitutions, replacing Willian with Roberto Firmino and then later replacing Gabriel Jesus with Douglas Costa.

This was a quite straightforward and predictable move by the manager. Brazilian fans would have wished he had sacrificed a defender or a midfielder to add to his striking power; after all, they had a whole 45 minutes to launch a comeback and this was Brazil of course.

Belgium was vulnerable in the second half but the five-time World Cup winners did not capitalise on their chances.

Neymar hasn’t lived up to his great potential as he once again failed to be the star man. He went down to easy tackles but the referee was spot on this time around and aware of the tactics in play.

Brazil was very predictable as all the players looked to cut in but they met a steel and crowded Belgium defensive line. Marouane Fellaini and Axel Witsel were throwing themselves at every shot and putting their bodies on the line to block. Thibaut Courtois was also excellent on the night, making some fantastic saves to deny Brazil.

With Brazil out, now France and England are the only two of the four who have ever been crowned World Champions.

France was not as impressive as they were in their first knockout game against Argentina but they didn’t have to be. Uruguay had little or should I say nothing to offer with Edison Cavani out with a hamstring issue.

Antonie Griezman was the difference between the two sides as he scored the second goal with a powerful shot from outside the box. Fernando Muslera will be the laughing stock as he takes over the title of ‘calamity keeper’ from Loris Karius, with a fumble on what looked like a routine save for a world-class goalkeeper of his calibre. Griezman was also the creator of the first goal from a well taken free kick to find Raphael Varane’s head to open the scoring. 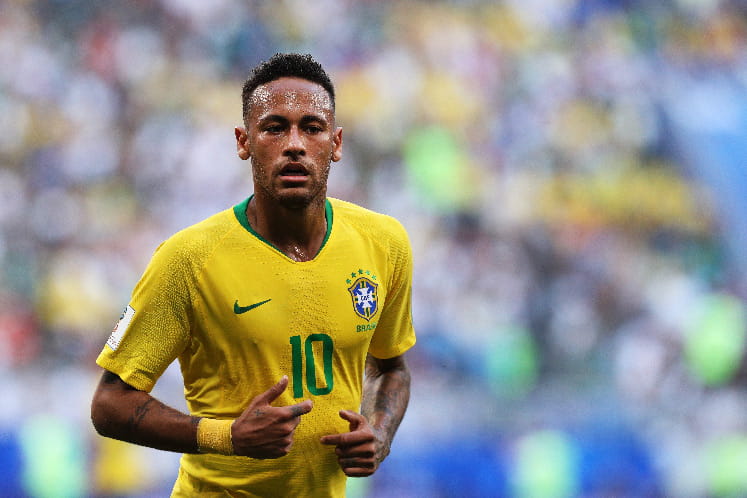 England to face Croatia on Wednesday

Croatia survived a scare against an energetic Russian side that had the whole stadium behind them. The score was level at 2-2, the match went to extra time.

It was Croatia’s second penalty shoot-out in the tournament after edging out Denmark in the round of sixteen 4-3. This time they won 6-5 with Ivan Rakitic scoring the winning spot kick to disappoint the home fans.

We can look forward to the first semi-final on Tuesday with intrigue and fascination and also trepidation, but whatever happens, if the young English lions roar on Wednesday, we are one game away!