The 3.15 at Newbury on Saturday is the £40,000 EBF Mares Novices Hurdle Series Final over two and a half miles. This race is a limited handicap restricted to fillies and mares and is the final of a qualifying series.

The ante-post favourite is The White Mouse, a five-year-old mare by Stowaway trained by Lucy Wadham. She won a maiden hurdle at Lingfield in November and was then beaten by Dame Du Soir at Leicester in January. On her most recent start, The White Mouse beat Oscar Rose by four lengths at Doncaster.

Nicky Henderson saddles She Mite Bite who is yet to win in five races over hurdles. The daughter of Scorpion was runner-up at Warwick in November and again at Sandown in February. She was still in with a chance last time out at Ludlow when brought down at the third last hurdle. That race was over three miles and she now drops back in trip.

Dan Skelton was in great form at Cheltenham last week with two winners. He has two entries with Etamine Du Cochet and So Lonely, ridden by Harry Skelton and Bridget Andrews respectively. Etamine Du Cochet won at Huntingdon in January before finishing third to L’Chamise at Uttoxeter.

So Lonely has been placed twice in four starts over hurdles. She was beaten two and a quarter lengths by Millarville at Fontwell in January and is set to meet that rival on a stone better terms. She then started favourite at Market Rasen but finished only third behind Viva Vittoria. The daughter of So You Think has hit the front early in her last two races and may be held up a little longer at Newbury. 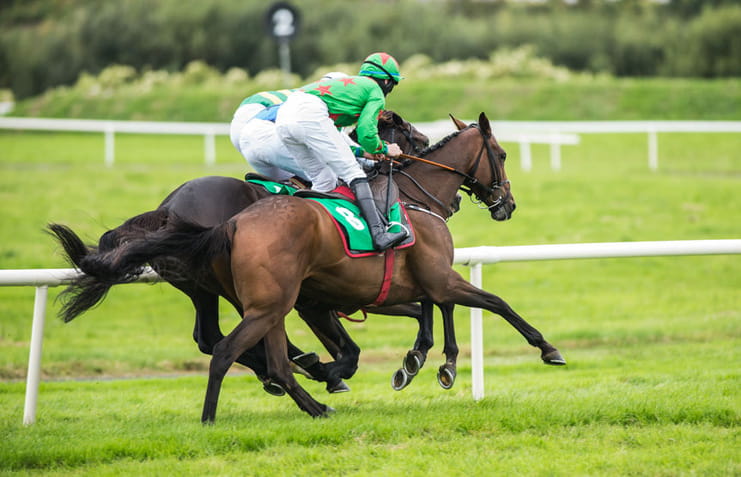 Lucy Alexander aboard Off The Hook in Mares’ Final

Off The Hook won despite racing quite keenly at Ayr in a maiden hurdle over this distance in January. She is a daughter of Getaway out of a mare by Old Vic and had previously finished third in a valuable hurdle at Queenohearts.

Sixty’s Belle represents the Alan King and ran well last time at Huntingdon when second to Loveherandleaveher. The five-year-old was only having her third race and it would be no surprise to see her improve on that effort.

Noel Fehily recently announced his retirement from the saddle and he partners Outofthisworld for Harry Fry. She won by eight lengths at Market Rasen in November before chasing home Midnightreferendum at Fontwell. She was pulled up at Ludlow last time but stumbled early in that race and was never able to get back into contention.

Top weight is Annie Mc, an easy 18 lengths winner at Chepstow in January. She was heavily backed to defy a 10lbs rise in the weights at Exeter but was well beaten behind Dinos Benefit. Annie Mc was beaten 8 lengths by Outofthisworld in November and is 3lbs worse off at the weights.

A Little Chaos has won her last two races at Fakenham and Market Rasen. She now makes her handicap debut for Stuart Edmonds and will be tackling this trip for the first time. She has shown a good turn of foot over two miles and is bred to stay. Sweet Adare has finished runner-up in her two races since having wind surgery in November. She was beaten three lengths by Miranda last time out at Wincanton over two miles.

The EBF Mares Novices Hurdle Final is due off at 3.15 at Newbury on Saturday 23rd March and will be televised live on ITV4.