The feature race at Newmarket on Saturday is the £500,000 Group 1 Dewhurst Stakes for two-year-olds over seven furlongs.

The Dewhurst is arguably the most significant trial for next season’s 2000 Guineas and has produced a host of subsequent Classic winners. The great Nijinsky won the Dewhurst in 1969, one of ten winners in the race for jockey Lester Piggott. Mill Reef won the following year with Grundy (1974), Wollow (1975) and The Minstrel (1976) following in his hoof prints.

Ballydoyle is set to run four horses in the race year, headed by US Navy Flag and Seahenge. The former is a colt by War Front and has won his last two races. He made all the running to win a Group 3 at the Curragh before following up in the Group 1 Middle Park Stakes at Newmarket. Seamie Heffernan rode him to a half-length victory over stable companion Fleet Review. This will be his first run beyond six furlongs.

Seahenge made a winning racecourse debut in Ireland prior to finishing fifth to Expert Eye at Goodwood. He was eight lengths adrift that day but bounced back to win the Group 2 Champagne Stakes at Doncaster. He is proven at the trip and is still improving. Doncaster seventh Mendelssohn and Fairyhouse winner Threeandfourpence complete the O’Brien quartet.

The ante-post betting market has been dominated by Sir Michael Stoute’s Expert Eye. The son of Acclamation stormed into the 2000 Guineas picture when winning the Group 2 Vintage Stakes at Goodwood in August.

The colt overcame greenness to make a winning debut at Newbury in June. He took a keen hold under Andrea Atzeni at Goodwood but the race was over as soon as his rider sent him ahead. Expert Eye ran on strongly to beat Zaman by four and a half lengths. The form has since been boosted by victories for the third, fourth and fifth placed horses. Remarkably, Stoute has not won the Dewhurst since Ajdal back in 1986. Expert Eye missed the National Stakes due to a minor infection but is reported in top shape for Saturday’s race. 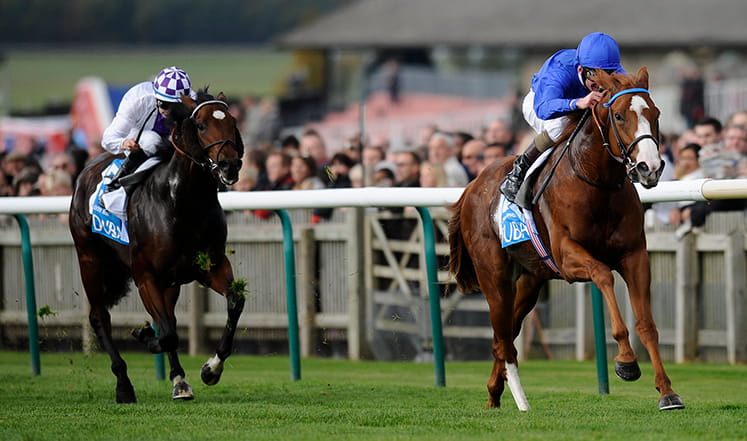 John Gosden relies on Emaraaty, a beautifully bred son of Dubawi out of Zee Zee Top. He caught the eye when fourth on his debut before beating Magnificent comfortably at Newbury. Jim Crowley sent him straight to the front and barely had to move a muscle in the closing stages. This is a big step up in class but he looks a very exciting prospect.

Jim Bolger has a tremendous recent record in the Dewhurst. He won it for three successive seasons between 2006 and 2008 and has since enjoyed success with Parish Hall (2011) and Dawn Approach (2012). He saddles outsider Theobold, a colt by Teofilo out of a mare by Anabaa.

His best run was behind The Pentagon at Leopardstown in July but he disappointed last time. Northern raiders Cardsharp and Great Prospector complete the line-up for Mark Johnston and Richard Fahey respectively. Both look fully exposed and should not be good enough to trouble the favourite.

The Dewhurst Stakes is due off at 3.00 on Saturday 14th October and will be televised live on ITV.