The feature race on Saturday is the Group 1 Tattersalls Irish 2000 Guineas at the Curragh.

Trainer Aidan O’Brien has dominated this race in recent years, winning ten of the last twenty renewals. He is the leading trainer in the history of the race with his victories including Rock Of Gibraltar (2002), Henrythenavigator (2008) and Gleneagles (2015). All three colts had won the 2000 Guineas at Newmarket on their previous outing.

Ballydoyle look set to continue their domination of the race with 2000 Guineas winner Churchill. The son of Galileo extended his winning run to six when beating Barney Roy at Newmarket earlier this month.

He is out of a Storm Cat mare and connections have decided against running him in the Epsom Derby. The stable have an embarrassment of riches in the Classic department with seven other candidates for the Derby. Churchill’s style of racing suggests that he will stay ten furlongs but a mile and a half could be stretching his stamina. Ryan Moore got a good lead off stable companion Lancaster Bomber at Newmarket before hitting the front at the furlong pole.

That was his first race since winning the Dewhurst Stakes at the same track in October. He is reported to be in good form and is likely to be joined by O’Brien’s Lancaster Bomber and Spirit Of Valor.

Coral are offering new customers the chance to back Churchill at 33-1 for Saturday’s race. Stakes are limited to £1 per customer and you must make an initial deposit of at least £5. If Churchill is beaten, you will still receive a £5 free bet.

Lancaster Bomber is a decent horse in his own right and was only a length and a half behind Churchill at Newmarket. He ran an almost identical race in the Dewhurst last year, setting the pace and staying on bravely once headed. He has raced against Churchill four times and been beaten on each occasion.

Spirit Of Valor was eighth in the Newmarket Classic, hanging to his right in the final furlong. He was over five lengths adrift of the favourite that day and it is difficult to see him reversing the form. 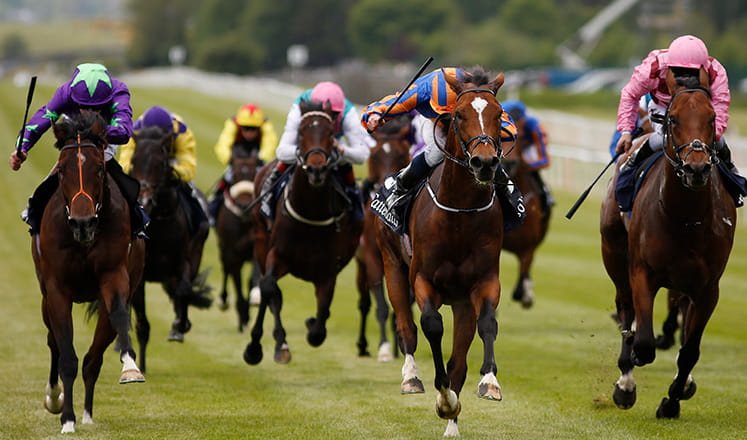 Bookmakers rate Irishcorrespondent as the big danger to Churchill on Saturday. Mick Halford’s colt is by Teofilo out of Contrary by Mark of Esteem. He made an impressive racecourse debut when beating Music Box by three and a half lengths at Leopardstown in April. He confirmed the promise of that run by beating Homesman by a similar margin at the Curragh recently. This is a big step up in class but he looks an exciting prospect.

Godolphin’s Thunder Snow is difficult to assess after being pulled up in the Kentucky Derby last time. He earned a tilt at the first leg of the American Triple Crown after winning the UAE 2000 Guineas and UAE Derby in Dubai. He emerged from the stalls bucking and kicking at Churchill Downs and Christophe Soumillon could not persuade him to race. No reason was found for his recalcitrant behaviour that day and he tries to redeem his reputation.

Glastonbury Song completes the line-up, a colt by Cassamento trained by Ger Lyons in Ireland. He won a modest race on the all-weather at Dundalk after finishing fifth in the Leopardstown Guineas Trial.

*Special price for new customers only

The Irish 2000 Guineas is set to get under way at 4.10 at the Curragh on Saturday 27th May and will be televised live on RTE2.