It is a busy weekend for horse racing fans with top quality cards at Ascot and Newmarket on Saturday ahead of Sunday’s Prix de l’Arc de Triomphe at Longchamp. There are two Group 3 races at Ascot including the £60,000 Cumberland Lodge Stakes for three-year-olds and upwards over a mile and a half.

Laraaib tops the ratings at Ascot

Top on official ratings this year is the Owen Burrows-trained four-year-old Laraaib. He is by Pivotal out of a mare by Unfuwain and races in the colours of Hamdan Al Maktoum. By far his best run was when second to Poet’s Word in the Group 3 Brigadier Gerard Stakes at Sandown in May. A reproduction of that effort would see him win comfortably on Saturday but his last two runs have been less encouraging.

Laraaib faded tamely to finish seventh in a Listed race here in June where he showed a tendency to lug to his right. He then trailed home a remote sixth behind Best Solution at Newmarket with Jim Crowley virtually pulling him up before the line. That was his first attempt at this distance and there remains an element of doubt concerning his stamina. Burrows has elected to fit the horse with blinkers to try to rekindle his enthusiasm.

Communique typifies the sort of horse that has been a feature of Mark Johnston’s record-breaking season. The three-year-old was having his twelfth race of the season when beating Barsanti in the Listed Godolphin Stakes at Newmarket last week. He started the season rated 84 but is now up to 109. Ryan Moore had him up with the pace last week and he always looked to be holding the runner-up.

John Gosden continues to harvest the top prizes and all eyes will be on stable star Enable in Sunday’s Arc. His representative here is the likely favourite First Eleven, a three-year-old son of Frankel. He went into many notebooks when finishing a luckless third to Baghdad at Royal Ascot in June.

The colt started favourite for the Group 3 Bahrain Stakes at Newmarket next time but finished a disappointing fifth to Wells Farhh Go. He reverted to handicap company here last month when comfortably beating Ghostwatch by two lengths. That was off a rating of 97 so he is entitled to take his chance in this grade.

Roger Charlton’s Blakeney Point defeated Hochfeld by a length and a half in a Listed race at Chester in soft ground. That followed an excellent sixth in the Ebor Handicap at York when he raced in blinkers for the first time. Grey Britain sprang a 50-1 surprise when beating UAE Prince in a Newmarket handicap in the spring. John Ryan’s gelding has not raced since but the victory did at least show that he stays a mile and a half. Veteran jockey Gerald Mosse has been riding superbly in the UK this season and will be looking to deliver a late challenge on the four-year-old. 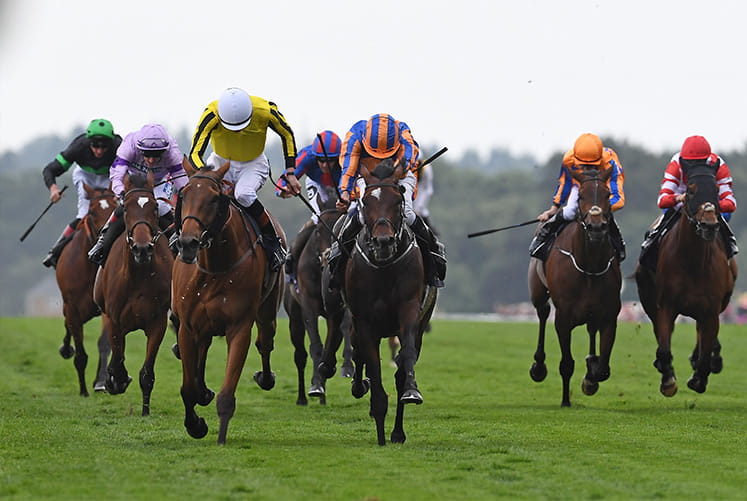 The Cumberland Lodge Stakes is due off at 2.25 on Saturday 6th October and will be televised live on ITV4.