England destroyed Spain 3-2 at the Estadio Benito Villamarin in the UEFA Nations League A Group 4 encounter. The match was sweet revenge after they lost 2–1 to Spain at Wembley Stadium in the opening match of the tournament. England scored with three first-half shots, their only shots on target in the game.

Let’s be honest, not many of us had this down as an away win! England were struggling with form and hadn’t played well against Croatia. Whereas Spain had a 100% record under the new manager and were banging goals in for fun. But here we have it, England have a chance to top the group and progress in the inaugural Nations League.

Spain controlled the match with the majority of the possession; 72% to England’s 28% possession. They also created more chances with 23 shots, 5 of which being on target. But England were more clinical creating 5 shots on goal with 3 on target, all of these were converted.

The home team started the match as you would expect, very comfortable in possession and dominating the play early in the match. The cynical among us knew this game was going to script and Spain appeared to be in total control. All signs suggested they had the game in their hands and it would be an easy and comfortable win for the hosts.

Well, the World Cup semi-finalists had other plans as they settled well into the match, absorbing the pressure, surviving early scares with top class goal-keeping skills by Pickford and his defence was excellent to deny the ambitious Spanish attack.

The Three Lions pounced in the sixteenth minute with their first real chance on goal when Rashford found Sterling with an exquisite through pass to go face to face with De Gea. My oh my! How well he struck that ball…if a goal was worthy of ending a barren spell it was that one, superbly finding the back of the net in the top corner for the first goal of the match. That goal ended his three-year dry spell for the National team.

Harry Kane then found Marcus Rashford at the half-hour mark for a beautiful first touch before tapping home the second goal of the match. The Captain – actively involved in all the three goals – then found Sterling for his second just seven minutes to the end of the first half and for England’s third, to end the half three goals to nil. England supporters in the ground looked at the scoreboard with disbelief.

In the second half of the game Spain came back with two goals by Paco Alcacer and Sergio Ramos but that’s all they could manage against a very impressive and disciplined defensive line. The host’s defensive line had a night to forget as their defensive woes were vividly exposed, exhibiting the same fragilities that have also plagued Spanish giants Real Madrid and Barcelona this season. Nacho and Sergio Ramos couldn’t keep up with the electric pace of the English sprinters on the counter. 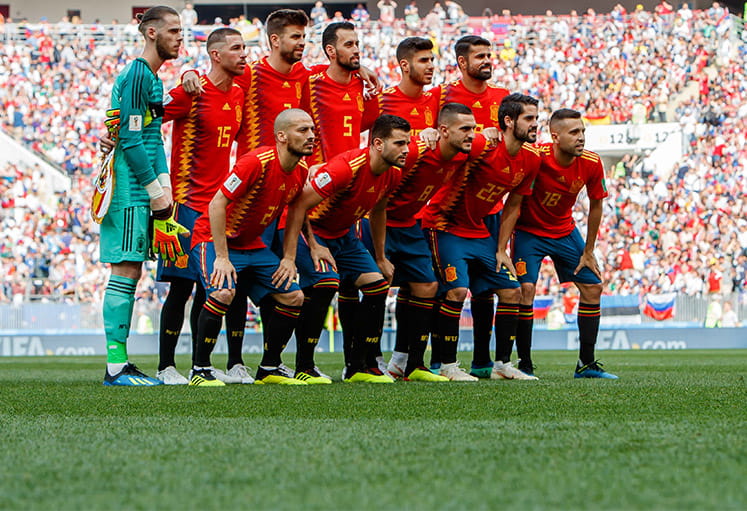 A new look to the team in formation was a gamble for the coach, changing from the accustomed 3-5-2 to a 4-3-3 formation. This change worked well and allowed the attackers freedom. There was room for Kane to drop off on many occasions, which allowed runners Sterling and Rashford to exploit the spaces. It was a really good day at the office for the team.

The front three had a lot to prove as Raheem Sterling hadn’t scored for over 40 appearances for the National team. Rashford had failed to score with two clear-cut chances in front of goal against Croatia, while Harry Kane was suffering a dry spell in front of goal, not having scored for six consecutive internationals.

Gareth Southgate still put his trust in the youngsters despite heavy criticism due to the huge level of inexperience in the team. It is only fair to give Southgate credit for his courage and bravery in team selection after that performance.

Six uncapped players and a starting eleven with just one player, Kieran Trippier, above 25 years old. The win was a bold statement and with England players achieving so much recent success at under 21, under 20 and under 18 level, the future looks very bright.

Before the match, England had lost all their matches except one when they faced decent opposition. So far they had faced Belgium, Croatia, and Spain. They lost twice to Belgium in the group stage of the World Cup and in the third-place play-off to finish fourth in Russia. They were knocked out of the World Cup by Croatia and just a few days ago settled for a goalless draw with the World Cup finalists. They then lost to Spain in the opening match of the UEFA Nations League at home.

The win is an important stepping stone for the team to keep their UEFA Nations League dreams alive and will be a real boost of confidence for the young team.

Not something we would normally say but UEFA deserve some credit for this new tournament. At no point during this game did it feel like a friendly. It was intense, immense and full of committed tackling (even if every sliding tackle did result in a yellow card).