It is Cheltenham Festival Trials Day on Saturday with a top quality seven-race card starting at 12.40. The 3.35 race is the £60,000 Grade 2 Cleeve Hurdle over three miles and is a recognised trial for the Stayers’ Hurdle at the Festival meeting.

Emma Lavelle’s Paisley Park beat West Approach by two lengths in the Grade 1 Long Walk Hurdle at Ascot last month. They could renew rivalry on Saturday along with fourth-placed The Mighty Don. West Approach was reverting from a spell over fences and looked to be going best of all turning for home but Paisley Park quickened up the better on the run-in. The Mighty Don stayed on well from off the pace and was beaten seven and a half lengths at the finish.

Paisley Park was confirming the favourable impression from his last-gasp success in a valuable handicap hurdle at Haydock on his previous start. The son of Oscar powered home that day under 11st 12lbs on good ground. Conditions are forecast to be good to soft this weekend and that should suit him perfectly.

West Approach was not disgraced when fifth in the Ladbrokes Trophy at the start of December. That form has worked out extremely well and he was a decent staying novice over hurdles. He was a 40-1 outsider at Ascot but won’t be so easy to dismiss on Saturday.

Sue Smith won a big televised race last weekend with Wakanda and has excellent claims here with Midnight Shadow. The gelding was a 25-1 winner of the Scottish Champion Hurdle in April and returned to winning ways at Aintree in December. He then won the Grade 2 Relkeel Hurdle at Cheltenham on New Years’ Day, beating Wholestone by two and three-quarter lengths. The runner-up is a good yardstick in these staying events and there seems no reason why the form should not be upheld.

Tom George’s Black Op is an interesting contender here, third to Lostintranslation in a novices’ chase last time. He had beaten that rival over hurdles at Aintree in April but has not looked a natural jumper of fences. Runner-up to Samcro at the Cheltenham Festival last year, Black Op is entitled to compete in top level staying hurdles and will be ridden by Jonathan Burke this weekend.

Aux Ptits Soins was a Festival winner for Paul Nicholls when landing the Coral Cup in 2015. He is now with Dan Skelton and won his first race for three years when beating De Name Evades Me at Cheltenham last time. He made smooth headway before sprinting clear of the runner-up and the handicap has pushed him up to a rating of 149. That still leaves him around 10lbs below the top rated here.

The highest official rating is that of Sam Spinner but he has failed to complete in his last two races. Jedd O’Keeffe’s popular front-runner has unseated his rider at Newbury and Ascot and would not have won any admirers last time. He was slow over the first and virtually refused at the second. Unowhatimeanharry also failed to complete that day, falling at the seventh flight. He had battled to a game success at Newbury in November but may need a softer surface to show his best form.

Agrapart was beaten with three to jump at Ascot and it would be a surprise if he could repeat last year’s victory. He is also at his best when the mud is flying. Lil Rockerfeller has lost his way over fences slightly after rattling off a hat-trick of victories. Neil King may elect to drop him back over hurdles to restore his confidence. 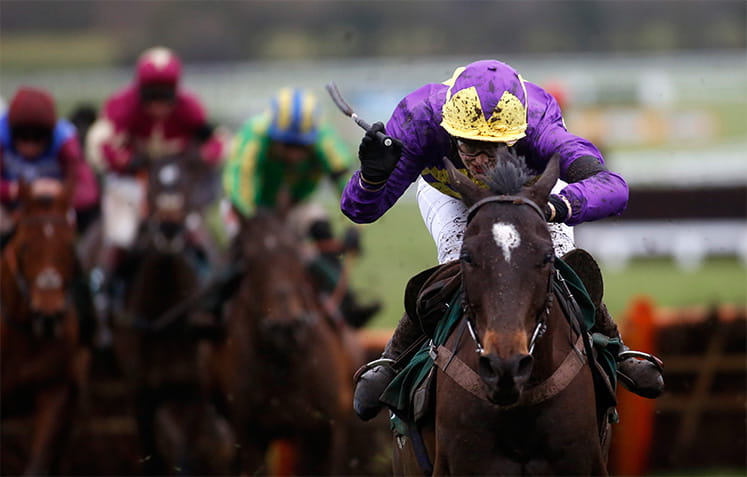 The Cleeve Hurdle is due off at 3.35 at Cheltenham on Saturday 26th January and will be televised live on ITV.