The highlight of the four-day Cheltenham Festival is the Gold Cup on Friday over an extended three-and-a-quarter miles.

This season’s Gold Cup has been blighted by injury. The 2015 winner Coneygree, last year’s winner Don Cossack and ante-post favourite Thistlecrack have all been forced to miss the race.

The most popular winner would undoubtedly be Cue Card, a past winner of the Champion Bumper and the Ryanair Chase. He looked set to land a £1 million bonus for his owners last year before crumpling on landing over the third last fence.

He gained consolation at Aintree with an emphatic victory next time and has won at Haydock and Ascot this season. He was particularly impressive last time when beating Shantou Flyer by fifteen lengths over an extended two-and-a-half miles. He is eleven years of age and the twelve-year-old, What A Myth, was the last veteran winner of the race in 1969.

His biggest danger could be stable companion, Native River, four years his junior. He has stamina in abundance but had sufficient pace to win the Hennessy Gold Cup in November. The Coral Welsh National was right up his street and he was value for more than his length and three-quarters victory. He warmed up with a workmanlike success in a three-runner race at Newbury in February and any further rain would improve his chance.

Willie Mullins may not dominate the Festival to the extent that he has in recent years following his split from Gigginstown House Stud. Gordon Elliott is the chief beneficiary of that separation but Mullins still has the Ricci-owned runners led here by Djakadam.

The French-bred gelding has finished runner-up in the last two Gold Cups. He has travelled supremely well in both races but not quite had enough in reserve on the final dash to the line. He has been running consistently this season, most recently behind Outlander at Leopardstown in December. The vibes from the stable suggest that he is ready to run another big race on Friday and his price has tumbled from 14-1 to 4-1 in recent weeks. Elliott was forced to withdraw Don Poli last week but could still be represented by Empire Of Dirt and Outlander. The former was beaten by only three-quarters of a length by Sizing John in the Irish Gold Cup last time. Outlander produced a career-best to beat Don Poli and Djakadam in the Lexus Chase but has been beaten on both previous visits to Cheltenham. 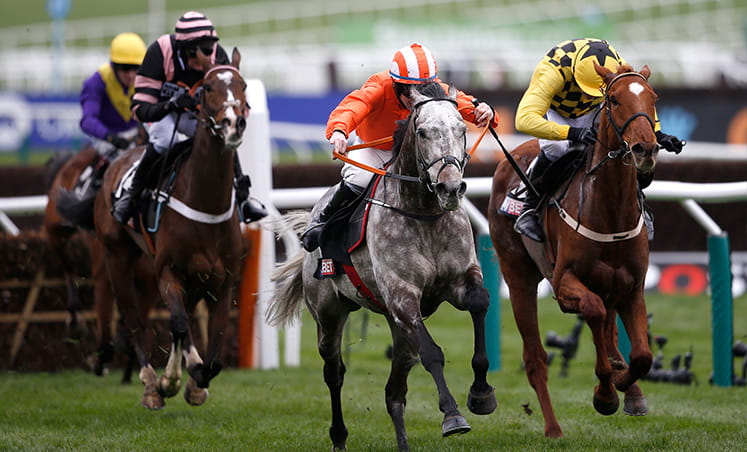 Jessica Harrington saddles Sizing John who will bid for the Irish-English Gold Cup double. Most pundits doubted his stamina prior to the Leopardstown race as he had never previously gone beyond two-and-a-half miles. He was all out to hold Empire Of Dirt and the extra quarter of a mile and uphill finish could find him out.

Jonjo O’Neill has won this race as a jockey and a trainer and he could be doubly represented with Minella Rocco and More Of That. Both parted company with their riders at Leopardstown but More Of That was the eye-catcher. The former World Hurdle winner was still in contention when unshipping Mark Walsh at the last fence.

The Cheltenham Gold Cup will be shown live on ITV and is due off at 3.30 on Friday 17th March.