The 2017 Cheltenham Festival gets under way on Tuesday 14th March with four days of top class National Hunt racing. Over a quarter of a million racegoers will pass through the gates with prize money topping the £4million mark this year. Punters are expected to gamble in excess of £150 million on the 28 races and bookmakers have some fantastic special offers.

So that you don’t miss out on the best limited-time only promotions that have been specially designed to coincide with the popular British racing festival, we’ve gone ahead and rated the ones that really caught our eye in the section below. In case you’re a one-time or sporadic punter that’s decided to come out and get a piece of the action at Cheltenham and you don’t have an account at a bookmaker, we’ve also listed a couple of the most stand out new customer deals so that you can open an account and take advantage of what’s on offer.

As can be seen above, there are a number of promotions ranging from free bet deals, enhanced odds price offers and bet refunds. If you have an account at William Hill, Betway or 888sport then it’s definitely worth taking advantage of all of them as they all, in one way or another, offer an added sense of value or security to your bets. 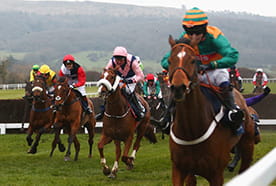 Grosvenor Casinos are newcomers to Sports betting and are stepping up their coverage of the Cheltenham Festival. Their easy-to-use site allows you to browse all the odds and place your best with the minimum of fuss. Grosvenor Sport provides live updates and betting odds on all horse races as well as all of the major sporting events worldwide. Back to Cheltenham and Grosvenor have really excelled with their double the odds promotions. On the first race of each day at Cheltenham you have the opportunity to double the price offered on your pick.

To claim this offer just select the first race at Cheltenham and make your selection. You then place your bet of up to £10, click on “bonus offers” and select “odds boost token” it really is as simple as that. What makes this deal even better is that the enhanced payout is made in cash and not the usual free bets offered at other sites. This is a highly recommended deal.

William Hill are offering Non-Runner Insurance on every race at the 2017 Cheltenham Festival. The offer applies to all ante-post bets placed after 5pm on January 27th. If your selection does not run at the Festival, your stake will be refunded. If your horse runs in a different race at the meeting, your stake will be refunded as a free bet to use at the Cheltenham Festival up to a maximum of £25. New William Hill members can receive 3 x £10 free bets after placing their initial £10 bet. The odds must be 1-2 or better and you must stake £10 to win or £10 each-way to qualify for the free bets. 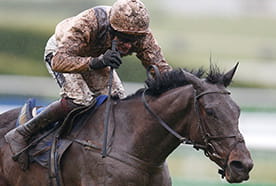 Betway are making the stand-out free bet of the Cheltenham Festival with odds of 33-1 on Queen Mother Champion Chase favourite Douvan. You must deposit a minimum of £10 and only £1 of that qualifies for the enhanced odds. Betway are also offering 100% Deposit Bonus on stakes up to £50 with money back as a free bet if your horse loses at Cheltenham. To qualify for the £50 free bet, you must join via the Betway website and place a bet at odds of 1.75 or better.

888Sport are offering new customers a massive 16-1 double on Altior to win the Arkle Trophy and Douvan to win the Champion Chase. The true odds for the double is currently only 1.76 -1 so it is a terrific price which is available up to a maximum stake of £10. The enhanced returns will be paid as free bets within 72 hours.

The Cheltenham festival, one of the single biggest horse racing spectacles in the UK sporting events calendar, features some of the best-trained horses known to the British Isles and numerous prestigious Grade 1 races. The full day-by-day festival schedule can be seen in the section below; be sure to keep tabs on when the action is taking place so that you can start thinking about where’s best to lay your stake.

The opening day gets under way at 1.30 with a cracking renewal of the Supreme Novices’ Hurdle. Bookmakers will breathe a sigh of relief if the once-raced Melon is beaten, a well-backed favourite trained by Willie Mullins. He faces a strong field which includes Moon Racer and Ballyandy, past winners of the Champion Bumper. Ballyandy battled on bravely to win the valuable Betfair Hurdle from Movewiththetimes and both have solid each-way claims.

Altior is impossible to oppose in the Arkle Trophy at 2.10. Nicky Henderson’s gelding has not put a foot wrong over fences and should have too much class for his rivals. The feature race is the Champion Hurdle at 3.30 and Henderson is chasing a record sixth winner. He has two strong contenders in Brain Power and Buveur D’Air in a race left wide open by the defections of Faugheen and Annie Power. Petit Mouchoir will also be difficult to keep out of the frame for Henry De Bromhead. Vroum Vroum Mag should repeat last year’s victory in the Mares’ Hurdle at 4.10 if allowed to take her chance. She holds six engagements at the Festival and stable companion Limini is also declared for this race.

Wednesday’s action gets under way with the Neptune Novices’ Hurdle at 1.30. Neon Wolf will be a popular choice after his easy win at Haydock. Colin Tizzard has high hopes for the unbeaten Finian’s Rainbow while Alan King’s Messire Des Obeaux lost nothing in defeat at Huntingdon last time.

Nicky Henderson has a strong hand in the RSA Chase at 2.10 and Whisper is just preferred to stable companion Might Bite. He was a high class hurdler and has taken his time to fulfil his potential over fences.

Mullins has resisted the temptation to revert to hurdles with Yorkhill this season and the move can pay off in the JLT Novices’ Chase at 1.30. He has not convinced everyone with his jumping this season but handled this track beautifully over hurdles and looks the one to beat. Unowhatimeanharry has dominated the staying hurdling division this season and can take the featured World Hurdle at 3.30. He has won his last eight races for Harry Fry and was a smooth winner of the Cleeve Hurdle last time out.

Henderson could also have a say in the competitive Coral Cup at 2.50 if saddling Consul De Thaix, twice runner-up to stable companion Brain Power this season. He looks the best each-way alternative to the well-backed favourite Tombstone. Douvan should have little difficulty claiming the featured Queen Mother Champion Chase at 3.30 as he bids to extend his unbeaten run to fifteen.

The Festival comes to a climax on Friday with the Cheltenham Gold Cup at 3.30. Despite the absence of Thistlecrack, Colin Tizzard has two leading contenders in Cue Card and Native River. The former was an unlucky faller at the third last a year ago but looked as good as ever at Ascot last time.

Djakadam has finished runner-up in the last two Gold Cups, most recently finishing four and a half lengths behind Don Cossack. He has been beaten in his last two starts but has been aimed at this race all season and has delighted connections in his recent work. The first five races on each day of the Cheltenham Festival will be televised live on ITV with coverage due to begin at 1.00pm.