The 2019 Cheltenham Festival gets under way on Tuesday 12th March, the first of four days of top quality National Hunt racing.

The famous Cheltenham Roar will send the runners on their way in the opening Supreme Novices Hurdle at 1.30. Al Dancer is the favourite after his convincing win in the Betfair Hurdle at Ascot last month. Elixir De Nutz and Grand Sancy have been running consistently in top grade events, notably when first and second in the Grade 1 Tolworth Hurdle at Sandown. Fakir D’oudairies could run here instead of in the Triumph Hurdle after his 13 lengths win at Cheltenham last time. Willie Mullins could saddle Klassical Dream and Aramon, separated by only a head at Leopardstown last month.

Mick Channon has high hopes for Glen Forsa in the Arkle Trophy at 2.10. He followed up his impressive Kempton victory by leaving Kalashnikov trailing at Sandown over this distance. He makes more appeal than Kayley Woollacott’s Lalor and a bigger danger may be the former Triumph Hurdle winner Defi Du Seuil, trained by Philip Hobbs.

The highlight of the opening day is the £450,000 Champion Hurdle at 3.30 where Buveur D’Air bids for a third consecutive victory. Nicky Henderson’s eight-year-old has been careless at his hurdles on occasions this season and cannot afford any major blunders on Tuesday. This looks a stronger race than last year with the Irish mares’ Apple’s Jade and Laurina in opposition. Apple’s Jade has been brilliant this season, winning all four races by an aggregate margin of 73 lengths. Laurina has yet to prove herself against Champion Hurdle class opponents but comes here with a big reputation.

The opening race on Day two is the Ballymore Novices’ Hurdle over two miles and five furlongs. Nicky Henderson’s Champ has dominated the betting for this race since beating Getaway Trump in the Challow Novices’ Hurdle in December. The form of that race has not worked out particularly well and Henderson has other options with Birchdale and Angels Breath. Gordon Elliott’s Battleoverdoyen leads a typically strong Irish challenge.

Elliott also has strong claims in the RSA Chase with Delta Work, unbeaten in three starts over fences. The form of his Fairyhouse win in December has been boosted by runner-up Le Richebourg. Few will wish to oppose Altior in the featured Champion Chase at 3.30. He has won at the last three Cheltenham Festival meetings, culminating in his seven lengths victory over Min 12 months’ ago. He remains unbeaten in twelve races over fences.

The Ryanair Chase looks wide open this year and much will depend on the final declarations made by Willie Mullins. He has numerous options here including Footpad and Min. The former tied up on the run-in when beaten by Simply Ned at Leopardstown in December over two miles. Min has run well here in the past and easily landed the odds in a Grade 1 last month. The danger could be the Paul Nicholls-trained Frodon if allowed to run here. This race looks perfect for the seven-year-old who may struggle to see out the three and a quarter miles in the Gold Cup.

Paisley Park has been all the rage for the Stayers’ Hurdle since powering to victory in a competitive renewal of the Cleeve Hurdle in January. He has all the qualities necessary to win this race and should confirm the form with old rival West Approach.

The Irish look to have a stranglehold on Friday’s Triumph Hurdle and there appears to be maximum confidence behind Sir Erec. Joseph O’Brien’s son of Camelot was placed in Group 2 company on the flat when trained by his father, Aidan. He sets the standard here after an easy victory in a Grade 1 at Leopardstown last month.

The Cheltenham Gold Cup is the highlight of the week and takes place at 3.30 on Friday. The form of last season’s epic duel between Native River and Might Bite has not worked out. Clan Des Obeaux won the King George VI Chase stylishly from Thistlecrack with Native River well beaten in third. Both the second and third will have a chance to reverse the form on this more suitable course.

Last season’s RSA Chase winner Presenting Percy is very short for a horse that has had only one prep race, albeit a fine performance over hurdles. Willie Mullins has a strong entry including Kemboy, Bellshill and Al Boum Photo. 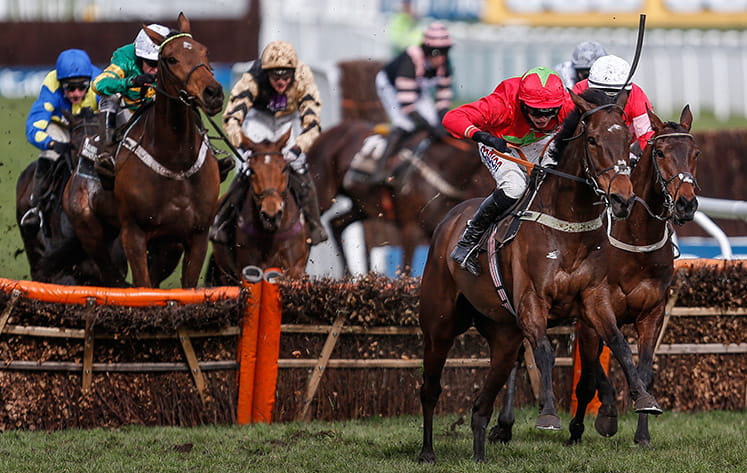 The first five races will be televised live on ITV each day with all 28 races live on subscription channel RacingTV.