Can Anyone Stop Real Madrid Winning the Champions League?

Despite the plethora of great teams who have won the UEFA Champions League since its inception in 1992, not one single club has managed to retain the illustrious trophy.

From the brilliant Ajax and Juventus sides of the mid-90’s to Pep Guardiola’s seemingly invincible Barcelona, not one has managed to record consecutive triumphs.

This may be about to change, however, with Real Madrid poised to reach a second consecutive final (and third in four years) and defend their title. The question that remains, of course, is whether anyone left in the top four can stop them from achieving their aim?

How Do the Semi-finals Stand?

With the first legs of the semi-finals already completed, two sides are already well on the way to booking their place in the Cardiff showpiece on June 3rd. These include Real, who thumped their City rivals Athletico 3-0 at the Bernabéu earlier this week. Juventus also produced a consummate performance to beat free-scoring Monaco 2-0 in the French principality, securing a potentially decisive advantage in the process.

This sets the scene for a Real Madrid and Juventus final, which is a mouth-watering prospect and a repeat of the 1998 showpiece (which was actually the Italian sides’ third consecutive appearance in a UCL final). While Los Blancos will go in search of history and attempt to retain the trophy they won last season, Juve will also be looking to slay the ghosts of their 2015 final defeat against an all-conquering Barcelona side. 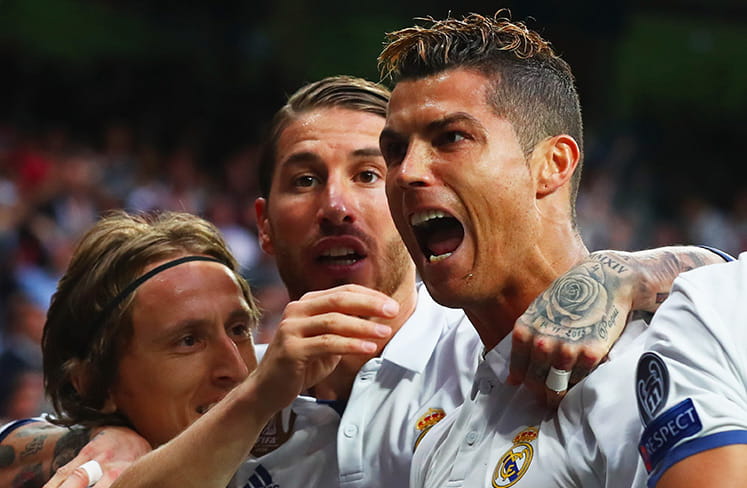 Why Juventus Pose a Real Threat to Madrid

While Madrid are overwhelming favourites to make history, there is no doubt that The Old Lady of Italian football poses a real threat. After all, their performance in Monaco (against a ferocious and fearless attacking outfit) was one of the most complete you will see all season, with Juventus organised in defence, assured on the ball and clinical in attack. Both physically strong and technically accomplished in equal measure, they have the capacity to nullify Madrid’s attacking threat and win their first Champions League title since 1996.

Juventus were also impressive in eliminating Real at the semi-final stage in 2015, and the club have retained many of the first-team players who appeared during that tie.

With these points in mind, there are sure to be a number of punters who back Juve to ruin Madrid’s fun in Wales and reinforce just how difficult it is to retain the Champions League. Any clash at the Millennium Stadium would certainly be tight and keenly contested, while Juve are certainly strong enough to exploit Madrid’s occasional defensive weakness and any doubt that exists in the mind of their players.

Ultimately, however, records exist to be broken, and Real are incredibly well-placed to become the first ever side to retain the Champions League this year. With star man Cristiano Ronaldo in sparkling form and a midfield of Luka Modric and Toni Kroos providing guile and experience in equal measure, it will take something incredible to stop them as they pursue a double of UCL and La Liga titles.