Has there been a better time to be a boxing fan? Not only do British boxers hold three of the four heavyweight titles, we also have several undefeated youngsters taking the rankings by storm. If that wasn’t enough, lightweight Lee McAllister took on heavyweight Danny Williams and won!

There have been many great nights of boxing and the action at the O2 arena last weekend certainly fit into that category. Top billing on the night was the much anticipated fight between Britain’s Dillian Whyte and New Zealander Joseph Parker.

Both men had only lost once in their professional careers and both those defeats were at the hands of one man, WBA, IBF and IBO champion Anthony Joshua. Whoever won this fight would be in prime position for a re-match with the 28-year-old or alternatively a shot at WBC holder American Deontay Wilder.

Few backed Dillian Whyte pre-fight. His opponent was the first fighter to take Anthony Joshua the distance and the 26-year-old had never even been on the canvas in his professional career. Before his defeat to Anthony Joshua, Parker handed much fancied Hughie Fury his first ever defeat on points.

These fears looked justified when the fight started, with the younger man was the more aggressive fighter and easily out boxing the Brixton born fighter. Whyte was able to use his physicality and put his extra weight to good use, bullying the fighter and disrupting the New Zealander’s rhythm.

Parker’s camp were incensed when in the second round a clash of heads took place between the two. Referee Ian John-Lewis declared it was a knockdown against Joseph Parker. This call was highly debatable, as replays suggest it was an intentional head-butt by Whyte and the Brit was lucky to escape a points deduction or even disqualification. But there was no questioning the knock-down in the ninth round though. A thunderous hook from Whyte put Parker onto the canvas for the first time in his professional career.

Whyte was tiring as the fight drew to a close, Parker took advantage and in the last round his aggressive punching paid off and a flurry of shots put Whyte on the floor.

If the fight had lasted another round Parker would have won as Whyte was fighting on empty. The bell rang and it went to the scorecards, Whyte took the decision 113-112, 115-110, 114-111. Parker’s camp have already stated they intend to appeal to the WBC and WBO regarding the decision.

Whilst the main event fight was entertaining, the fight of the evening was the slugfest between Britain’s Dereck ‘Del Boy’ Chisora and France’s Carlos Takam. It was an astonishing fight that has since been described as a ‘fight in a phone box’.

Takam started the fight at an incredible pace, bombarding the Brit with a non-stop flurry of punches. Chisora was more conservative with his punches, hitting Takam on the counterattack. Takam was getting tagged hard and often and by the middle rounds the 34-year-old from Finchley was way behind on the scorecard.

This all changed in the eighth round. Takam threw a punch that was smartly blocked by Chisora, his counterattack hit Takam high on the top of the head, and the power was such that it sent the 37-year-old sprawling to the floor. He beat the count but was hit by another incredible shot at the restart. The referee didn’t even start the count this time, it was all over and a stunning victory for Chisora. 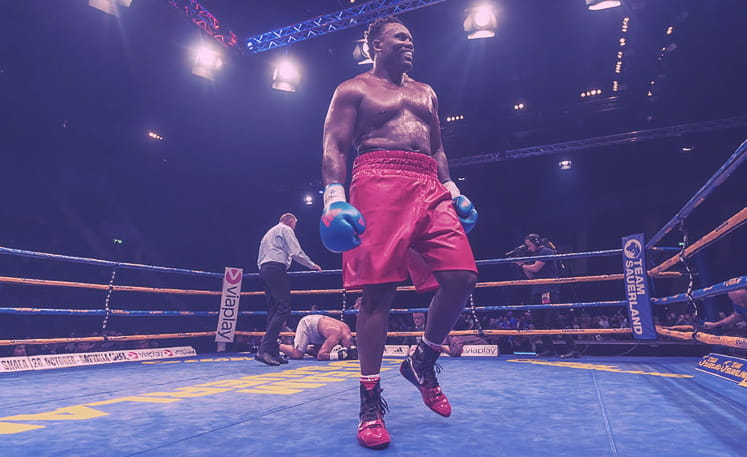 While Dillian Whyte and Dereck Chisora’s victories were fantastic achievements, they pale into insignificance when compared to the astonishing feat achieved by Lee McAllister. The Scottish lightweight took on two-time British heavyweight champion Danny Williams and won.

In William’s last three fights he had won by first round knock-outs and has faced some of the World’s best fighters including Vitali Klitschko, Dereck Chisora and Audley Harrison as well as knocking out Mike Tyson in 2004.

This was the mismatch of all mismatches – Williams had a four-stone advantage over McAllister who normally fights at welterweight, a full seven weight classes below the heavyweight division.

The fight came about as McAllister had stated he would love to fight a heavyweight like Williams. Williams responded saying he would kill the fighter from Aberdeen and would easily beat the Scot in three rounds. The lightweight champion accepted the challenge and remarkably floored the 45-year-old three times during the bout before William’s camp threw in the towel in the 10th round.

McAllister said after the fight that he took the fight to prove a point but insisted his days of fighting heavyweights are over, stating that they punch a lot harder than his normal opponents and he will be going back to the welterweight division. What a guy!