The £2.25million Breeders’ Cup Classic is one of the richest flat races in the World and is run over ten furlongs on dirt.

Andre Fabre’s Arcangues won at odds of 133-1 in 1993 while Raven’s Pass struck for John Gosden and Britain in 2008. In recent years the European runners have favoured the Breeders’ Cup Turf for obvious reasons but the Classic remains the climax of the two-day meeting.

The roll of honour includes Ferdinand (1987), Alysheba (1988), Cigar (1995), Tiznow (2000 and 2001) and Zenyatta (2009). Last year’s race was won in spectacular fashion by Triple Crown winner American Pharoah who stormed clear to win by six and three-quarter lengths. He also set a track record at Keeneland in the process.

The clear favourite this year is California Chrome, a five-year-old son of Lucky Pulpit trained by Art Sherman. He won the Kentucky Derby and the Preakness in 2014 and the £4million Dubai World Cup in March this year. He has won all three races since, most recently beating Dortmund in a Grade 1 last month.

He made all the running that day to win comfortably by two and a quarter lengths without jockey Victor Epsinoza having to do any more than nudge him along. His preparation has gone perfectly and there are no obvious flaws in the favourite.

His main market rival is Arrogate who has won his last four races for Bob Baffert. He produced a brilliant display to win the Grade 1 Travers Stakes by thirteen and a half lengths in a record time. That was his first race in graded stakes company after winning two optional claimers.

Confidence in the three-year-old took a slight knock when he was drawn widest of all in barrier ten. He does not have much racing experience and he looks more of a relentless galloper than a speed horse. Mike Smith will want to keep as close as possible to the favourite in the early stages.

Frosted is the only other runner in single figures. He is best known for his clashes with American Pharoah last year but he has gone on to prove himself as a smart colt in his own right. He won the Metropolitan Handicap by fourteen lengths in June on his first run since finishing fifth in the Dubai World Cup. He has ground to make up on California Chrome on that evidence. 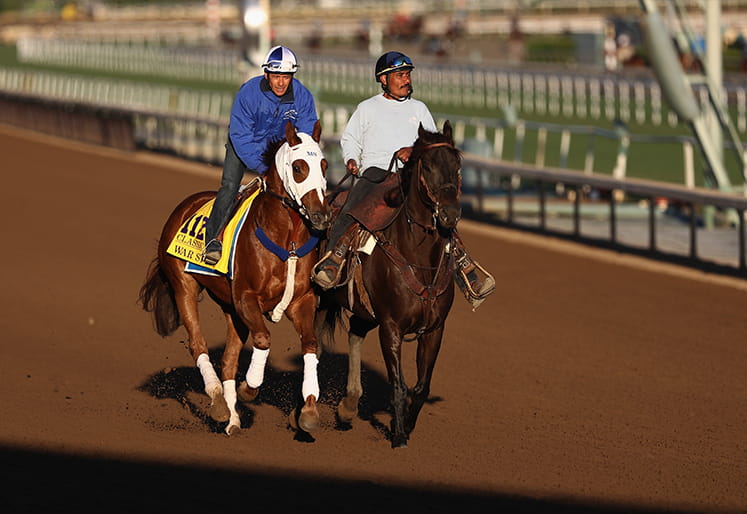 Melatonin won the Grade 1 Gold Cup at Santa Anita Stakes in June, beating Win The Space by a length and a half. He was beaten a length by Effinex on his previous start at Oaklawn Park. Trainer David Hofmans saddled Alphabet Soup to beat Cigar in this race twenty years ago and is hopeful of a big run from Melatonin.

Hoppertunity provides Baffert with a useful second string after beating Effinex by half a length at Belmont Park. He looks held by California Chrome after being beaten at Meydan and Del Mar. He also finished behind Melatonin in June. Shaman Ghost edged out Mubtaahij in the Grade 1 Woodward Stakes to book his place in the field.

Effinex finished second to American Pharoah in this race last year when starting at odds of 100-1. Keen Ice ran on to finish fourth for Dale Romans but has not reproduced that form since. War Story was outclassed by California Chrome in the Pacific Classic in August and Win The Space also has over six lengths to find to trouble the favourite.

The Breeders’ Cup Classic is due off at 12.35 am on Sunday 6th November and will be screened live on At The Races.